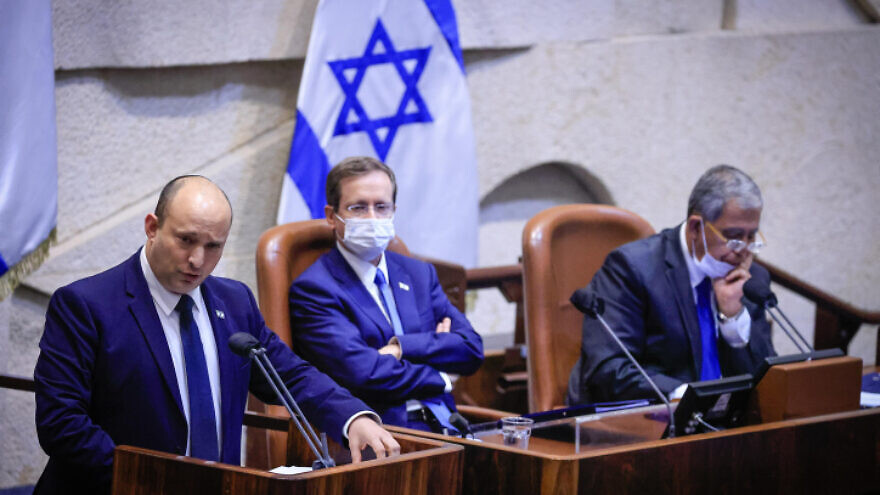 Following speeches by Knesset Speaker Miki Levy and President Isaac Herzog, Prime Minister Naftali Bennett’s address to the plenum was interrupted repeatedly by shouts of “liar” and “con man” from members of the opposition.

Among the disrupters were Likud Knesset members Galit Distel Atbaryan, Dudi Amsalem and May Golan, who accused the prime minister of being responsible for all the COVID-19 deaths that have occurred on his watch.

All were forcibly removed from the hall.

The handling of the pandemic—replacing lockdowns with booster shots—was the main focus of Bennett’s claims regarding his coalition’s accomplishments since June.

He devoted the rest of his speech to the “failures” of the previous government, led by now opposition leader Benjamin Netanyahu, then dropped what is being reported in the local press as a “bombshell headline” about possible progress in a Mossad operation last month to garner intelligence about the whereabouts of Israel Defense Forces navigator Ron Arad, who went missing in action in Lebanon 35 years ago.

Calling Bennett by name rather than addressing him as “prime minister,” Netanyahu attacked the current government, using a play on the Hebrew words for “contain,” “feed” and “eat.”

The government “contains [coronavirus deaths, Iran and Hamas terrorism],” he said, “[while] the media feeds, and the citizens ‘eat it’ [pay the price.]”

Netanyahu proceeded to accuse Bennett of falsely representing the previous government’s COVID-19 policy—of erecting a “scarecrow”—to obfuscate what he said was its failure to bring a shipment of vaccines from the United States to Israel on time.

“If you had acted on time, you would have spared tens of thousands of Israelis, who will suffer from severe side effects [of COVID-19] for many years to come, and perhaps for their whole lives,” he charged.

Bennett’s and Netanyahu’s mutual recriminations came after Herzog’s plea to the Knesset for decorum.

“The daily confrontations in this house, the style, the vulgarity—this is what our children, the youth of Israel, are seeing, and they are our future,” the president said.

He continued: “For each and every one of us, in words and in deeds, has an influence on the face of our State of Israel. … And all we have is the power of our personal example to have an influence, calm things down, change direction.”

Quoting U.S. President Joe Biden—to whom he referred as “our friend”—Herzog added, “Not merely by the example of our power, but by the power of our example.”