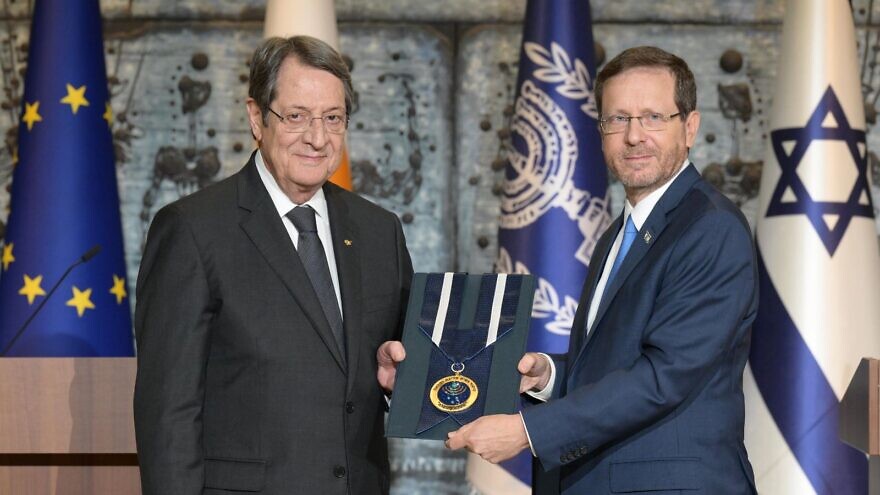 (November 9, 2022 / JNS) Israeli President Isaac Herzog awarded the Israeli Presidential Medal of Honor to President of Cyprus Nicos Anastasiades in Jerusalem on Wednesday in recognition of his efforts to further bilateral relations.

“While the nations of the Mediterranean have more often been divided by conflict than united by cooperation, Israel and Cyprus have actually built a true friendship,” said Herzog at the President’s Residence.

“The core of this new Mediterranean reality is built upon the brave Israel-Cyprus bilateral relationship, which you have courageously spearheaded, including our trilateral alliance together with Greece,” he said.

“The three-way Hellenic alliance has become a pillar of Mediterranean stability in the present, and a key to a sustainable, healthy and prosperous future. There is no doubt that this unprecedented reality of cooperation, mutual understanding and deep respect is a direct result of your decade-long presidency.”

Anastasiades thanked Herzog for the award on behalf of himself and the Republic of Cyprus and for his efforts “to further advance our relationship, which we can now proudly call as strategic.”

The Presidential Medal of Honor is awarded to those who have made an extraordinary contribution to the State of Israel or to humanity. The award was the initiative of the ninth president of Israel, Shimon Peres, and was first given in 2012. The award was last bestowed on U.S. President Joseph R. Biden, Jr.