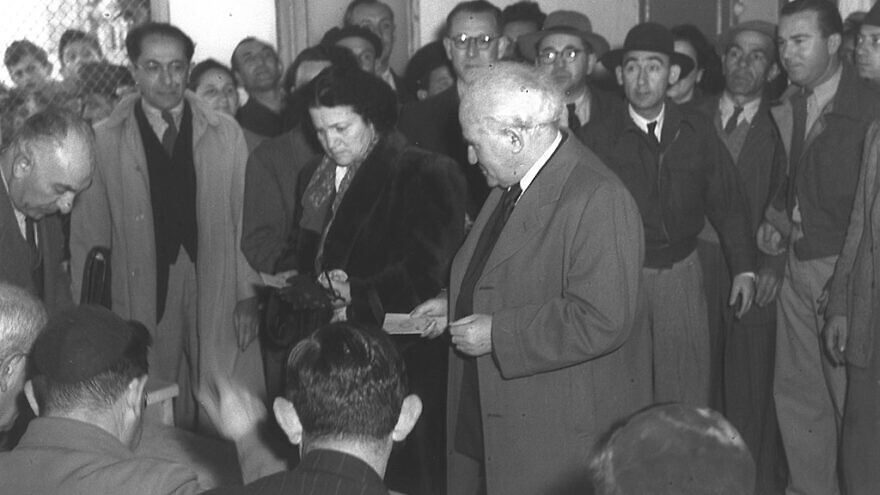 Prime Minister Ben-Gurion casts his vote for the Israeli Constituent Assembly on January 25, 1949. Two days after its first meeting, legislators voted to change the name of the body to the Knesset. Source: Wikimedia Commons.
Republish this article
811 WORDS
Spread the word.
Help JNS grow!
Share now:

(October 31, 2022 / JNS) Israelis are expected to turn out en masse to vote in Tuesday’s national election. Despite five election cycles in just over three and a half years, Israel continues to maintain a relatively high voter turnout and is on par with other Western democracies, falling somewhere between the United States (66.8 percent in 2020) and France (74 percent in 2022).

Professor Ofer Kenig, a senior lecturer in political science at Ashkelon Academic College and a research fellow at the Israel Democracy Institute, told JNS that until 1999, Israel “used to have a very high level of voter turnout, but in the last two decades that level has declined and now revolves around 66-67 percent.

“It is not as high as it used to be though it is still higher than several [other] liberal democracies,” he added.

The main reason Israelis turn out to vote in high numbers is that they are very interested and involved in the nation’s politics, Kenig said.

“Research has shown that democracies with proportional representation than rather majoritarian systems usually have a higher turnout level,” he added.

While he suggested that Tuesday’s turnout may be high since this race is perceived as being “very tight” between the left and right political blocs, at the same time, he said he didn’t want to predict anything since “the common wisdom is that the average Israeli is quite bored with the current election.”

In terms of how Israel compares to other democratic countries with regard to voter turnout, Kenig said the country has, over the last two decades, remained around the midpoint of Western democracies.

“There are some which perform much better in this aspect, mainly the Scandinavian countries aside from the unique cases of those countries which have compulsory voting,” he said.

He emphasized turnout in Israel is slightly misleading because its citizens are not allowed to vote from abroad, with only a few exceptions (e.g. diplomats and their families stationed in foreign countries).

Kenig noted that there are variants in the voting patterns of segments of Israeli society. Arabs vote at a much lower rate than the general public, he said, while we see that the ultra-Orthodox and national religious populations vote in higher percentages.

He added that “generally, you see a positive correlation between socioeconomic level and the participation rate.

“If you put the haredi population aside, you see the correlation,” he said. “In ‘development towns’ you see a much lower participation rate compared to wealthier communities.”

He attributes the lower turnout in poorer communities to sentiments of exclusion, lack of interest, and lack of trust in the political system.

“If you feel that you are neglected and that you have no impact then your motivation to go out and vote is much lower,” he said.

There are people who do not vote because they feel their vote makes no difference, while others feel there are no good candidates from which to choose, Kenig said.

Yael Shomer of Tel Aviv University’s School of Political Science, Government and International Affairs told JNS that while “forecasting is for fools,” people are “fatigued,” “alienated from the political system and feel their voice is not heard, so they may not participate.”

There are Israelis who really do not care about politics so they disconnect from the political sphere” and don’t feel they can affect events, she said. “But there are those who really believe they have an input and that our representative democracy is indeed representative.”

She said Israelis are passionate about politics and everyone has an opinion.

“We think of ourselves as more evolved and we certainly have opinions one way or the other,” she said. “If you ask an Israeli, they will have a firm opinion about a topic.”

Shomer said she does not forecast a significant decrease in participation rates.

“Israel traditionally has had a relatively high turnout in elections, but we do see a declining trend,” she said.

In the first few decades of the state, she explained, voter participation stood at around 80 percent. Now, it hovers at around 65-70 percent.

“So there has been a steady decline,” she said.

Nonetheless, the last four elections have seen an increase compared to previous cycles, something that she said “was quite a surprise.”

“So there were some fluctuations there but overall this was an increase from previous elections,” she continued. “Comparatively, it is a high rate of participation.

“We might see a little bit of a decline,” Shomer said, but still, she believes “people will go to the polling stations—reluctantly.”