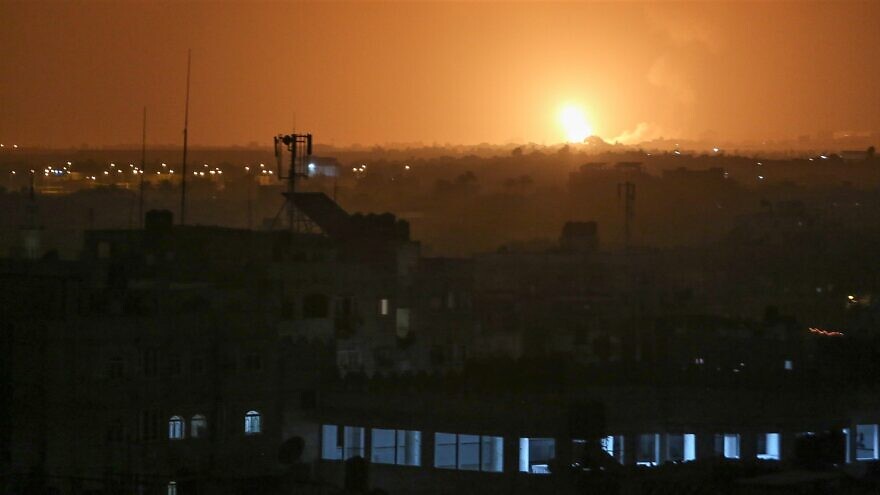 A ball of fire and smoke rises during an Israeli airstrike in Khan Yunis, in the southern Gaza Strip, on April 19, 2022. Photo by Abed Rahim Khatib/Flash90.
Spread the word.
Help JNS grow!
Share now:

(April 19, 2022 / JNS) The Israeli Air Force struck a Hamas weapons manufacturing site in the Gaza Strip on Tuesday in a pre-dawn sortie, following a Gazan rocket attack on southern Israel on Monday evening.

In a statement, the Israel Defense Forces said it held “the Hamas terrorist organization responsible for all terror activity emanating from the Gaza Strip.”

The IDF said an Iron Dome missile-defense battery successfully intercepted the projectile in mid-air. There were no reports of injuries or damages.

This was the first Gazan rocket attack against Israel in seven months, according to a report Kan News.

The report cited Palestinian sources as assessing that Palestinian Islamic Jihad, the second-largest terror faction in Gaza, fired the rocket. According to the report, Hamas told meditators it was not behind the launch and that it was not interested in an escalation with Israel at this time.

Also on Tuesday, the IDF, together with the Israel Security Agency (Shin Bet), conducted joint counterterrorism overnight throughout the West Bank. The forces apprehended a total of five suspects, said the military.