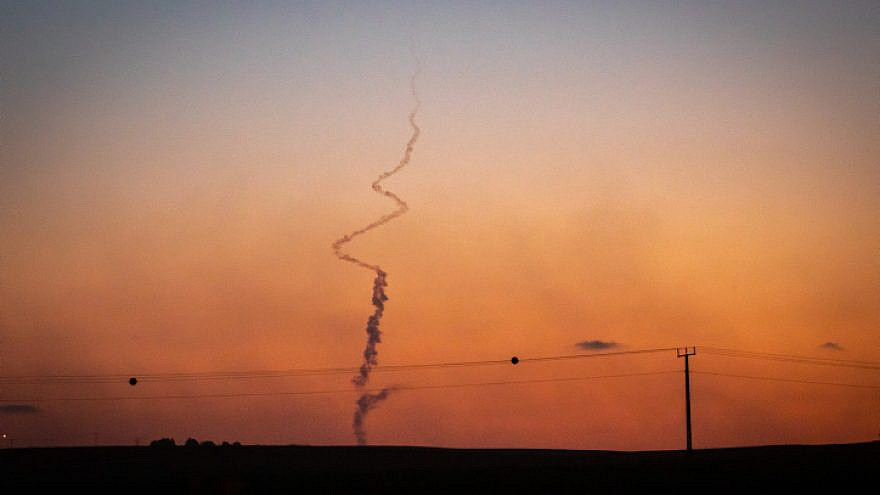 Smoke trails from a rocket launched from the Gaza Strip into Israel, May 19, 2021. Photo by Olivier Fitoussi/Flash90.
Spread the word.
Help JNS grow!
Share now:

(May 23, 2021 / Israel Hayom) In the 11 days of “Operation Guardian of the Walls,” the Israel Defense Forces destroyed some 62 miles of Hamas’s tunnel network in the Gaza Strip, according to IDF Spokesman Brig. Gen. Hidai Zilberman.

Speaking hours after an Egyptian-brokered ceasefire took effect on Friday, Zilberman reported that some 200 Hamas operatives, including 25 high-ranking members, had been targeted and killed in IDF strikes during the fighting in Gaza.

Ten Hamas government offices were destroyed, as well as 11 buildings belonging to its internal security forces and five banks used by Hamas.

Zilberman also said that two drone attacks by Hamas had been thwarted and that Hamas’s manufacturing and development capabilities had been degraded.

As for the performance of Israel’s Iron Dome missile-defense system, Zilberman said that over the course of the operation, the system had intercepted 90 percent of incoming rockets deemed to pose a threat to populated areas.

After Israel’s Diplomatic-Security Cabinet voted on Thursday night to accept the ceasefire, Israeli Defense Minister Benny Gantz said, “the defense establishment maintains its willingness to defend the citizens of Israel, and the security forces and the IDF are deployed in the field, on all fronts, for defense and offense. The reality on the ground will decide how we continue to operate.”

Gantz said that the IDF and Israel’s other security forces had secured “military achievements unprecedented in their power, precision and strategic significance” during the operation.