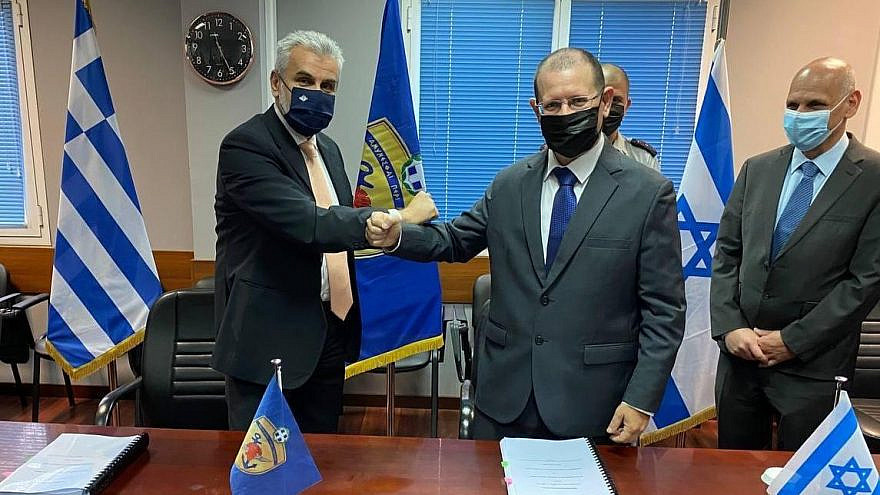 (April 18, 2021 / JNS) Israel and Greece announced on Sunday the signing of a defense cooperation agreement worth approximately 5.4 billion shekels ($1.6 billion).

The agreement includes the establishment of a flight training center for the Hellenic Air Force, to be built and operated for 22 years by Israeli defense company Elbit Systems.

The training center will be modeled after the Israeli Air Force’s own flight academy, and it will be supplied with 10 M-346 training aircraft made by Italy’s Leonardo company. The aircraft will be an Israeli variant known as the “Lavi,” which, according to Elbit, are equipped with “unique avionics and embedded training solutions.” These aircraft are also used by the IAF for training cadets.

Within the framework of the agreement, Elbit Systems will also provide kits to upgrade and operate the Hellenic Air Force’s Beechcraft T-6 Texan II training aircraft, as well as training, simulators and logistical support.

“In the future, the parties will also consider areas of cooperation between the Israeli flight academy and Hellenic Airforce Academy,” the joint statement added.

Greece approved the Israeli bid for the contract in January.

Israeli Defense Minister Benny Gantz described the agreement as a reflection of “the excellence of Israel’s defense industry and the strong relations between the defense establishments of Greece and Israel.”

IDF Brig. Gen. (res.) Yair Kulas, the head of the Israeli Defense Ministry’s International Defense Cooperation Directorate, called the deal “the most expansive and one of the most significant defense agreements to date.” The agreement “further cemented” the “strategic partnership” between the Israeli and Greek Defense ministries, he added.

“The Israeli-Greek military bond continues to grow stronger,” the IDF tweeted after the meeting. The chiefs of staff discussed “operational developments in the region.”

During an official visit to Israel in June, Greek Prime Minister Kyriakos Mitsotakis pointed to Ankara as a regional threat.

“Turkey is undermining stability in the region. It aims to control politically and militarily the entire area of the eastern Mediterranean,” Mitsotakis told Ynet at the time of his visit.