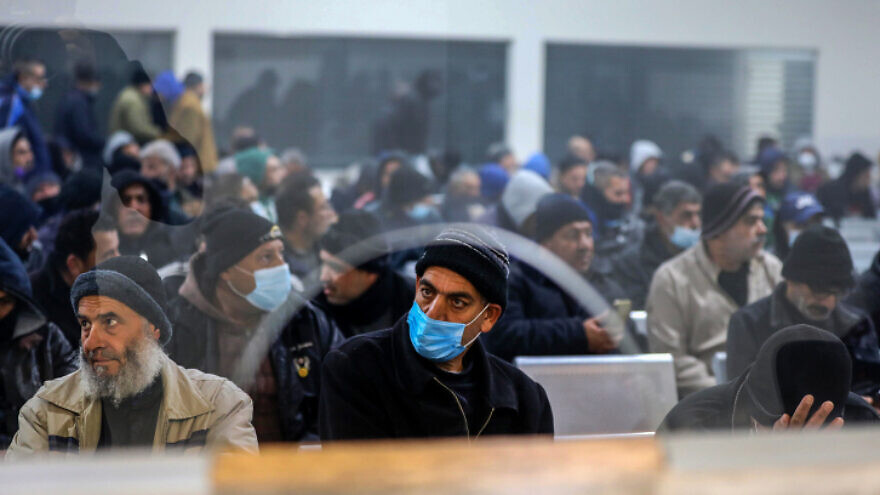 (January 25, 2023 / JNS) The Israel Security Agency (Shin Bet) announced on Wednesday that Israel is revoking the entry permits of 230 Gazans who recruited unsuspecting Palestinians in Judea and Samaria to facilitate terrorist activities on behalf of Hamas.

Dozens of Palestinians were arrested in the past few weeks for involvement in the plot led by Farah Hamed, a Hamas member who was deported to Gaza as part of the 2011 Gilad Schalit prisoner-exchange deal, the agency said.

According to the Shin Bet, most of those detained were unaware that they were being used by Hamas operatives, who would enter Israel pretending to work for businesses and other organizations and then offer work to Palestinians in Judea and Samaria.

The recruits would in most cases unknowingly be tasked with transferring funds for purchasing weapons or delivering illicit packages, said the Shin Bet.

In December, the Shin Bet announced that it had thwarted a Palestinian terrorist bomb plot and a separate suicide bombing targeting Green Line Israel, involving operatives from Judea and Samaria who were being directed by handlers from the Gaza Strip.

A working bomb hidden in a fire extinguisher was seized.

According to the Shin Bet, a joint investigation with the Israel Defense Forces saw the plot foiled on Dec. 14, adding that the Popular Resistance Committees directed it together with Shuhada Al-Aqsa, both of them terrorist organizations based in Gaza.

The previous month, the Shin Bet announced that it had foiled a bus-bombing plot. The would-be bomber, a Gazan with a permit to work in Israel, intended to detonate an explosive device aboard a bus in southern Israel, according to the agency.

The suspect, identified by the intelligence agency as Fathi Ziad Zakut, 31, of Rafah, was charged with severe security offenses.

Around 17,000 Palestinians from Gaza currently have work permits to enter Israel on a daily basis.