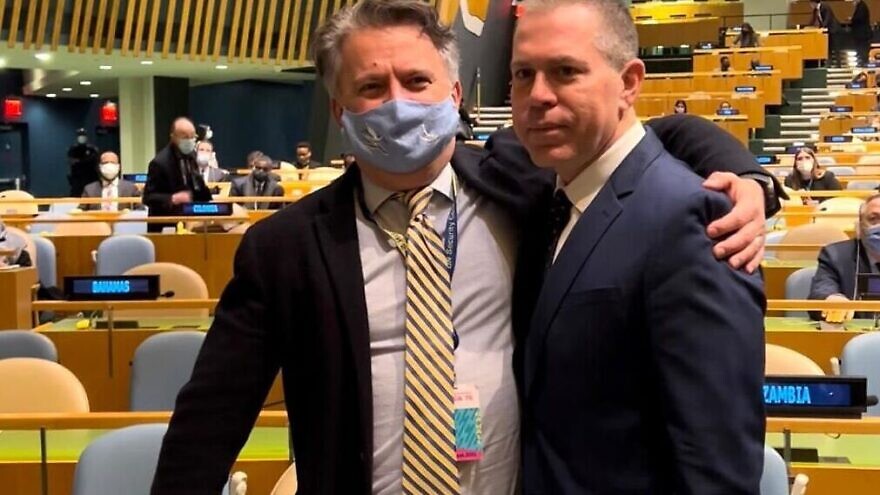 Israeli Ambassador to the United Nations Gilad Erdan strolled across the General Assembly floor on Monday morning, making a direct line for his counterpart from Ukraine. Six months earlier, Sergiy Kyslytsya had visited Israel as part of a delegation invited by Erdan.

On this morning, Kyslytsya was hoping he would have a country to go back to at all.

Erdan patted the seated Kyslytsya on the back and they shook hands. After days of painful diplomatic neutrality, Jerusalem made a choice. Still sensitive to Russian control of Syrian airspace and Israel’s freedom of movement to attack Iranian and proxy forces to its north, Jerusalem said it would vote yes to a resolution condemning Russia’s invasion of Ukraine in an extraordinary emergency session of the General Assembly, not seen in decades.

“Israel was and will be on the right side of history,” Israeli Foreign Minister Yair Lapid said in a Monday statement. “We have a moral duty and historical obligation to be part of the effort.” This followed Israel’s silence on a U.N. Security Council resolution late last week demanding a halt to Russia’s hostilities, with Jerusalem, much to the disappointment of the U.S., reportedly reaching a late decision not to co-sponsor the resolution, knowing it would be vetoed by Russia, a permanent Security Council member, anyway.

With the Security Council subsequently unable to take action on a matter that is deemed urgent and essential to international peace and security, it referred the issue to the General Assembly in a procedure implemented only ten times before. Fittingly when it comes to the U.N., Israel had been the subject of five of those previous emergency sessions, regarding the Suez Crisis, the Six-Day War, the Israeli-Palestinian conflict (twice) and Israel’s application of sovereignty to the Golan Heights.

After the handshake between Erdan and Kyslytsya, Erdan leaned in, apparently in an effort to offer words of solidarity and comfort. Instead, Kyslytsya, likely aware of the imperative to document the support of Israel – and every country willing to offer it – cut off Erdan after a word or two, suggesting they pose for the cameras that tailed Erdan on his visit.

Kyslytsya, mind racing, gave a thumbs up to the cameras and began to sit back down. Erdan whispered something in his ear and the Ukrainian popped back up, smiling under his mask, and put his arm around Erdan’s shoulder, posing for a few more pictures, before Erdan departed.

It was over quickly, yet was part and parcel of the diplomacy of the day. Noting the sensitivity of the emergency session and its impending support for the associated resolution, the Israeli mission to the U.N. told JNS that Erdan was, as of Monday, not planning on speaking during the multi-day session, which opened with Kyslytsya suggesting Russian President Vladimir Putin kill himself like Adolf Hitler did, as all but a few countries that followed came out swinging on Ukraine’s behalf. Erdan will remain silent, but, as they say, a picture says a thousand words.

‘If (Putin) wants to kill himself, he doesn’t need to use a nuclear arsenal’

A vote on the resolution is likely on Wednesday, with the overwhelming majority of the U.N.’s 193 members expected to support it.

Kyslytsya set the tone, hitting back at Putin’s decision to put Russia’s nuclear weapons forces on “special alert” on Sunday. Putin told Kremlin defense officials that he made the move because of “aggressive statements” made by the West in condemnation of Russia’s invasion.

“If (Putin) wants to kill himself, he doesn’t need to use a nuclear arsenal,” Kyslytsya said. “He has to do what the guy in the bunker did in Berlin in May 1945,” referring to the suicide of Hitler, the Nazi dictator. Kyslytsya further compared Putin to Hitler by saying the Kremlin’s “spiritual leaders” were “from the Third Reich.”

"Raise hand to confirm that Russia was admitted to UN …Anyone? Should I put my glasses if my vision fails me? And I don't see any hand raised. Any country? Anyone voted for Russian membership? Think about it when you listen to the Russian delegate"

Throughout the session, both inside the General Assembly Hall and from their respective capitals, a number of countries noted sanctions and other measures being implemented to pressure Russia to halt its invasion. The Russian Mission to the U.N. in Geneva even announced that Foreign Minister Sergey Lavrov had to cancel his trip to the U.N. Human Rights Council session and U.N. disarmament talks after his plane were banned from using the airspace of several European Union countries. The E.U. confirmed its decision to shut down its airspace to Russia on Sunday, and Lavrov’s appeals to the U.N. secretariat for assistance fell flat.

As for Israel, it appears that Russia will decline the mediation services offered by Israeli premier Naftali Bennett, who told Putin on Sunday that he was willing to lead negotiations to find an end to the conflict. Ukrainian President Volodymyr Zelensky had proposed the idea of Israeli mediation to Bennett on Friday, noting Israel’s unique diplomatic place as a long-standing partner to both Ukraine and Russia.

In the meantime, Jerusalem is offering humanitarian aid – including water purification kits, medical equipment, tents, blankets, sleeping bags and additional equipment for civilians to protect them from the cold winter weather – while embassy staff help both Israeli citizens and non-Israelis to escape and find refuge at the Ukrainian-Polish border.

Like Erdan’s strategy in New York, Israel seems to be offering what it can right now, which is largely measured, behind-the-scenes support.