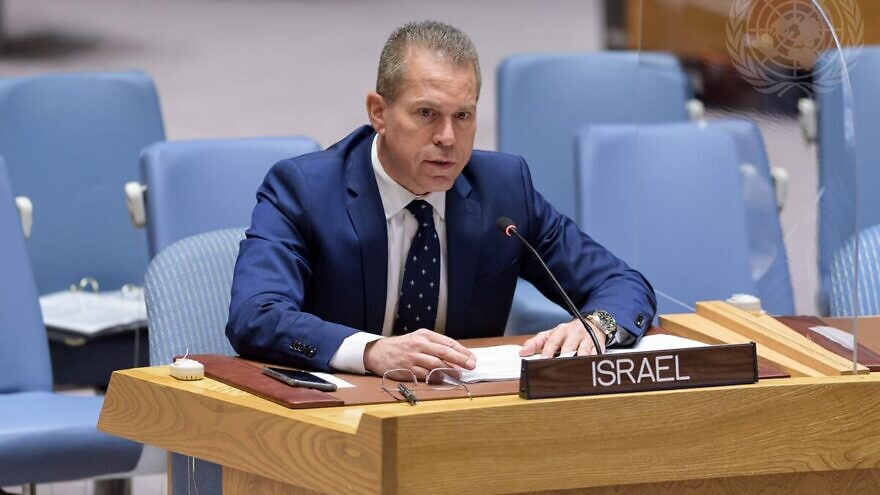 (January 19, 2023 / JNS) The Israeli and Palestinian Authority ambassadors to the United Nations slung barbs at each other in a fiery debate on Wednesday at the U.N. Security Council.

During the body’s quarterly open debate on the Israeli-Palestinian conflict, Israeli Ambassador Gilad Erdan told his counterpart from Ramallah to “save your false cries of victimhood,” telling Riyad Mansour that his remarks to the council were a “charade” and a “performance of lies.”

Erdan heavily criticized a recent vote by the full U.N. General Assembly to seek an ICJ advisory opinion on the conflict, calling it part and parcel of the Palestinian “jihad war of multilateral terror.”

As a result of the General Assembly resolution, which passed with less than a majority of the member states supporting it, Israel packaged a set of retaliatory measures against the Palestinian Authority, including the transfer of tax revenue away from Ramallah and to victims of Palestinian terrorism, along with the stoppage of Palestinian construction in Area C of Judea and Samaria and the stripping of some VIP benefits for Palestinian leadership.

In response, the Palestinians gathered more than 90 signatures to a statement condemning Israel’s response, including some member states that had sided with Israel on the GA resolution.

“Terror comes in many forms. At its core terrorism is a means by which to scare people into capitulating to demands,” Erdan said. “One of the weapons they use in this jihad war is the manipulation and abuse of international bodies. They weaponize these bodies in order to force Israel into surrendering to 100% of their demands.”

He said the Palestinians continually exploit the perennial anti-Israel majority at the U.N. to implement unilateral measures while avoiding negotiations on a political settlement.

The ICJ probe demand “was a clear unilateral step initiated by the Palestinians with the sole purpose of destroying Israel as a Jewish state,” Erdan said. “Israel’s guilt has been predetermined,” he continued, adding that “destroying the Jewish state has always been the Palestinians’ only goal.”

Erdan chided the U.N. for issuing misleading statistics by inflating Palestinian casualties, omitting key context such as whether those casualties include members of terrorist groups, and underreporting Israeli deaths and injuries. A U.N. spokesperson said the body stands by the accuracy of its reporting.

He also continued to hammer away at Ben-Gvir’s January 3 visit, which was conducted according to all status quo protocols allowing for Jews to ascend to, but not pray on, the Temple Mount, the holiest site in Judaism.

Mansour described the quiet 13-minute stroll by Ben-Gvir as part of “illegal unilateral measures in Jerusalem aimed to undermine the historic status quo.”

Tor Wennesland, the U.N. special coordinator for the Middle East peace process, started Wednesday’s Security Council meeting with a warning that “Israelis and Palestinians remain on a collision course amid escalating political and inflammatory rhetoric as well as heightened violence in the West Bank, both with potentially grave consequences.”

U.S. Ambassador Linda Thomas-Greenfield called for the return by the Hamas terrorist group of two Israelis and the remains of two soldiers being held in Gaza. Earlier this week, Hamas released a video believed to be of Israeli civilian Avera Mengistu, who entered the Gaza Strip eight years ago and was taken captive. Mengistu is mentally ill.