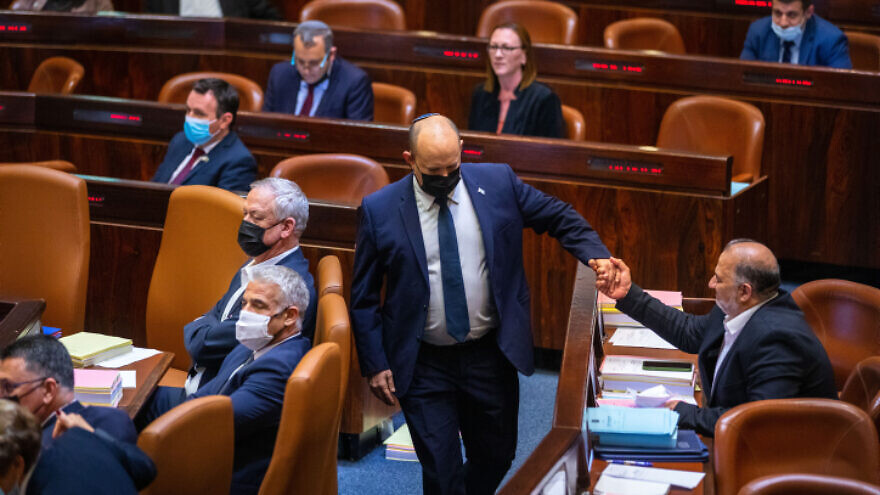 Israeli Prime Minister Naftali Bennett with Ra’am Party head Mansour Abbas during a plenum session and a vote on the state budget at the assembly hall of the Knesset in Jerusalem on Nov. 3, 2021. Photo by Olivier Fitoussi/Flash90.
Republish this article
714 WORDS
Spread the word.
Help JNS grow!
Share now:

(November 4, 2021 / JNS) The Israeli government approved the 2021 state budget on Thursday, which includes more than $9.6 billion for the Arab sector—a prize for Mansour Abbas’s Ra’am Party, part of the governing coalition.

Israeli Prime Minister Naftali Bennett said the budget’s passing was a “day of celebration for the State of Israel” after a “years of chaos” he blamed on his predecessor, Benjamin Netanyahu. The budget was approved with the bare minimum majority of 61-59 votes.

Nevertheless, there had been controversy in recent days over the Ra’am Party and its ties with Hamas, the terror organization that runs the Gaza Strip. Opposition leader Netanyahu accused Bennett of paying off Ra’am for its support, which has been accused of transferring funds to Hamas. Netanyahu’s own ultimately unsuccessful negotiations with Ra’am to join his government eased the way for Bennett and Lapid to make a deal with the party.

The government and Ra’am have denied the accusation.

This came after a report by Israel’s Channel 13 that taxpayer funds budgeted for a Ra’am linked NGO to help orphans went to Hamas. Both Hamas and the Ra’am Party draw their ideological foundations from the Muslim Brotherhood.

Abbas, the head of the United Arab List (also known by its Hebrew acronym, Ra’am), the political branch of the southern branch of the Islamic Movement, is set to get a significant victory as it delivers the goods for the Arab community. The Islamic Movement, an offshoot of the Muslim Brotherhood in Israel, seeks to Islamize Israeli Arabs and transform Israel into an Islamic state in the long term.

Shaheen Sarsur, who has been involved in Arab politics for more than 12 years and served as a parliamentary consultant for three previous Knesset members—the last one being Talab Abu Arar of the Islamic Movement’s parliamentary party—told JNS that the budget the Ra’am party achieved is an outstanding achievement.

“Ra’am is getting its just reward with the increased budget for the Arab sector and has justified its historical participation in an Israeli government,” he said.

After years of political stalemate, this is the first government to pass a final budget in the Knesset since 2018.

“The Arab parties that make up the Joint List have just continued their boring strategy of just talking and not achieving anything,” said Sarsur, adding that “the Joint List is playing down the budget victory because it is jealous. Israeli Arabs want to see changes that improve their lives whether it is regarding building or combating violence in their communities.”

Ra’am took a gamble before the previous election by breaking off from the Joint List of Arab parties and running independently. As a result, there was some concern that the party would not pass the threshold to make it into the Knesset, but it squeaked by and is now on the verge of transcending its previous popularity.

Asked how he expects Ra’am to do in the next elections, Sarsur predicts that the party would get more than the four seats in the last election and reach five or perhaps six.

Ghada Zoabi, founder and CEO of the Israeli-Arab news portal Bokra.net, said, “The Arab public hopes that the budget becomes a reality and is not just talk.”

During the coronavirus crisis, the problems in the Arab sector stood out, and it still struggles with violence and many other issues, she continued. “As long as the budget money is not translated into actual improvements and closing the gaps with the Jewish public, Arabs will not be interested in the publication of large amounts for the sector in the next budget.”

The funds for the Arab sector include money for education, employment, Bedouin Arabs in the southern Negev Desert, health care and infrastructure. Earlier this year, Israel’s Cabinet under Netanyahu approved an additional 150 million shekels (nearly $50 million) to combat crime in the Arab sector.

Zoabi pointed out that in previous elections, many Arabs didn’t want to vote for this very reason. “If there are real changes that take place, then it could influence politics” and benefit Abbas’s Ra’am Party.