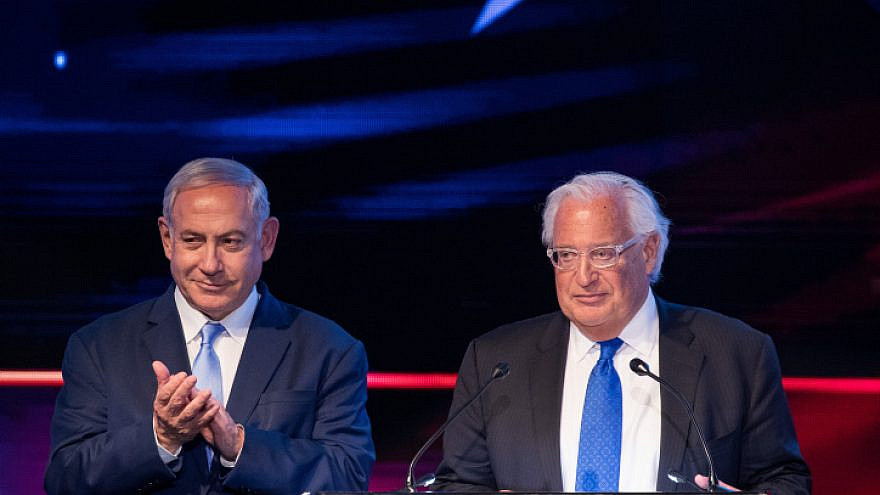 U.S. Ambassador to Israel David Friedman and Israeli Prime Minister Benjamin Netanyahu mark one year since the transfer of the U.S. embassy from Tel Aviv to Jerusalem on May 14, 2019. Photo by Yonatan Sindel/Flash90.
Spread the word.
Help JNS grow!
Share now:

(January 17, 2021 / JNS) Israeli Prime Minister Benjamin Netanyahu bid farewell to outgoing U.S. Ambassador to Israel David Friedman during the weekly cabinet meeting on Sunday. Friedman, a Trump appointee who helped facilitate many of the outgoing administration’s overtly pro-Israel policies, will be soon replaced with an appointment yet to be named by the incoming Biden administration.

“Today, we are taking our leave from U.S. Ambassador to Israel David Friedman,” said Netanyahu. “I must say that over the years, I have met many ambassadors from many countries, including from the U.S., our great ally, but I can say that there was never a better ambassador than David Friedman in establishing the deep ties between Israel and the U.S.; in correcting the diplomatic injustices that were created over the years in global diplomacy regarding Israel, and in establishing the status of Jerusalem as the capital of Israel, and many other things some of which have yet to be told.”

Among the major diplomatic achievements that Friedman helped facilitate was America’s recognition of Jerusalem as the official capital of Israel and the relocation of the U.S. embassy from Tel Aviv to Jerusalem.

Other achievements noted by Netanyahu include American recognition of sovereignty in the Golan Heights, and changing longheld U.S. policy which had opposed Jewish communities in Judea and Samaria as a violation of international law.

The prime minister also acknowledged Friedman’s role in”planning and formulating the Trump plan, which is the first serious plan for achieving a realistic peace between Israel and the Palestinians.”

Lastly, Netanyahu thanked Friedman for his team’s efforts in expanding the “circle of peace” in order “to reach peace with countries in the Arab world and the four peace agreements we made over the last four months as well as those that will come afterward,” referring to the Abraham Accords.

“This was a great effort that is good for U.S. relations, good for Israel and good for peace. For all these David, thank you very much.”