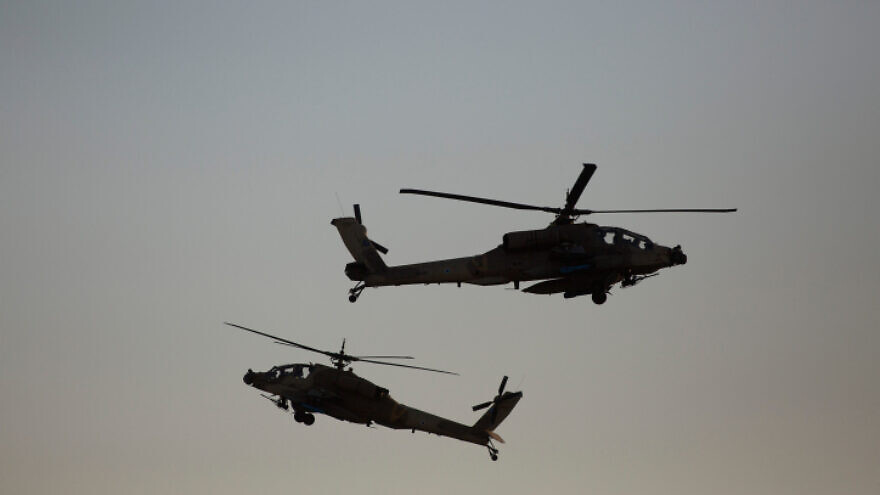 Israeli AH-64 Apache Longbow helicopters take part in an air show for a graduation ceremony at the Hatzerim base in the Negev desert, near the southern Israeli city of Beersheva, on Dec. 31, 2015. Photo by Lior Mizrahi/Flash90.
Spread the word.
Help JNS grow!
Share now:

(May 3, 2020 / JNS) Syrian state media reported on Friday that Israeli helicopters had fired several rockets from its territory in the Golan Heights at targets in southern Syria.

Opposition sources in Syria said several posts near Quneitra were targeted in the attack, which caused material damage but no casualties, according to Reuters.

A regional intelligence source quoted in the report said Israel was stepping up its attacks in Syria as world attention is focused on the coronavirus pandemic.

In a separate incident, the Syrian army said on Friday that a series of blasts at an ammunition depot east of Homs caused casualties, but was not caused by an attack as it had earlier announced. However, the U.K.-based Syrian Observatory for Human Rights (SOAR) said Israeli strikes on a military base on the Homs-Palmyra road run by Hezbollah had caused the explosions, according to the report.

Last week, official Syrian media reported that Israeli fighter jets had fired missiles at areas near Damascus from Lebanese airspace, in the fourth reported Israeli strike in Syria in the last month.

The previous week, SOAR reported that nine fighters, including six foreigners loyal to the Iranian-backed terrorist group Hezbollah, were killed in an Israeli airstrike near Palmyra in Syria’s Homs Governorate.