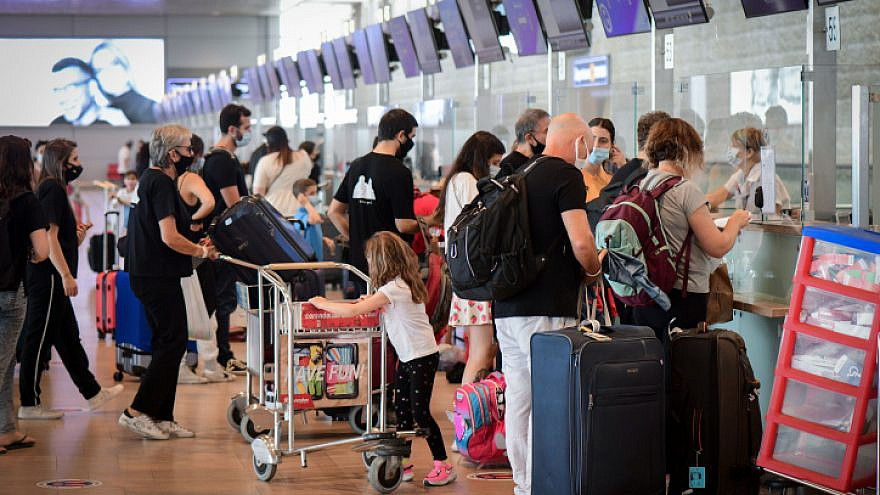 Passengers at Ben Gurion International Airport on Sept. 24, 2020, during a nationwide lockdown due to the COVID-19 pandemic. Photo by Avshalom Sassoni/Flash90.
Spread the word.
Help JNS grow!
Share now:

“In light of the threats that have been made recently by Iranian elements, and given the past involvement of Iranian elements in terrorist attacks in various countries, there is concern that Iran will try to act in this manner against Israeli targets,” the NSC’s Counter-Terrorism Division said in a statement on Thursday.

“Possible arenas for this action are both countries close to Iran (such as Georgia, Azerbaijan, Turkey, the United Arab Emirates, Bahrain, the Kurdish area in Iraq), as well as throughout the Middle East and Africa,” said the statement.

In addition to the above, according to the NSC, “global jihad organizations, especially ISIS and its supporters, are demonstrating high motivation to carry out terrorist attacks (pursuant to the attacks that have occurred recently in France, Austria and Germany).”

Furthermore, “Calls have been made by global jihadist elements for attacks on Israelis and Jews. It is possible that part of the current wave of Islamist terrorism will reach targets identified with Israel or Jewish communities, synagogues, kosher restaurants and Jewish museums.”

According to the NSC, the upcoming Christian and Jewish holidays in December and January “are liable to attract hostile terrorist activity in Europe.”

As a result, it said, it is calling on Israelis planning to visit overseas, including those on official trips and business delegations, to “show heightened awareness [particularly when] in proximity to Israeli missions, synagogues and Jewish-community institutions; listen to the security directives of the local authorities; keep distant from crowded areas; and refrain from congregating in public areas that are not secured or are in proximity to government institutions.”

The NSC’s warning comes in the aftermath of the Nov. 27 assassination of senior Iranian nuclear scientist Mohsen Fakhrizadeh, which the regime in Tehran has attributed to Israel.

Iranian Supreme Leader Ayatollah Ali Khamenei said that there must be a “definite punishment” for the targeted killing, without providing specifics. But an op-ed published in the regime-controlled Khayan newspaper, whose editor-in-chief was appointed by Khamenei, called for Tehran to respond to the assassination by launching an attack on Haifa that “causes heavy human casualties.”

A week earlier, Iranian Foreign Ministry spokesman Saeed Khateebzadeh threatened the “Zionist regime” that if it continues to “disrupt” what he called the Islamic Republic’s “advisory presence” in Syria, it will suffer a “crushing response.”

Khateebzadeh’s comment came on the heels of Israel’s latest airstrikes on Iranian and Syrian military targets in Syria.