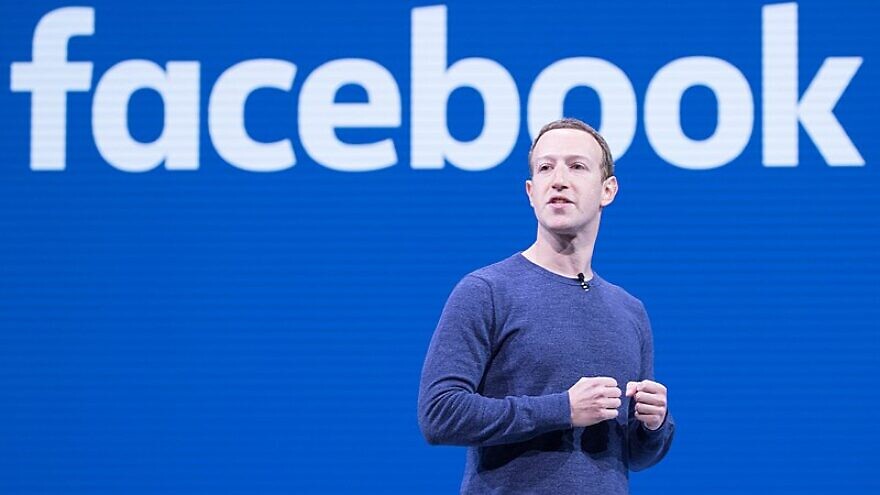 (October 30, 2020 / JNS) Over the last several months, the coronavirus pandemic and the upcoming presidential election have left many Americans feeling confused and uncertain about the future. With normal social interaction limited, many have shifted towards the digital world to connect, share, discuss and debate.

During the 2016 election, tech companies such as Facebook, Twitter and Google came under fire for becoming venues for the spread of false information on all kinds of subjects. In order to address these concerns, these platforms have stepped up policing in order to limit the spread of misinformation and to fact check news being shared. However, for some, these social-media companies have gone too far in their crackdown, raising questions over the role that these companies play in the free exchange of ideas in the 21st-century.

In recent weeks, Facebook had moved to ban several pro-Trump groups that were mainly comprised of Russian American Jews.

“The majority of the members in the now-deleted groups are refugees from the former Soviet Union. Many of them are ‘refuseniks’ who had to fight for their right to live in a free country,” she said. “Denying them their right to free speech so close to this year’s most important election is both disconcerting and unacceptable.” 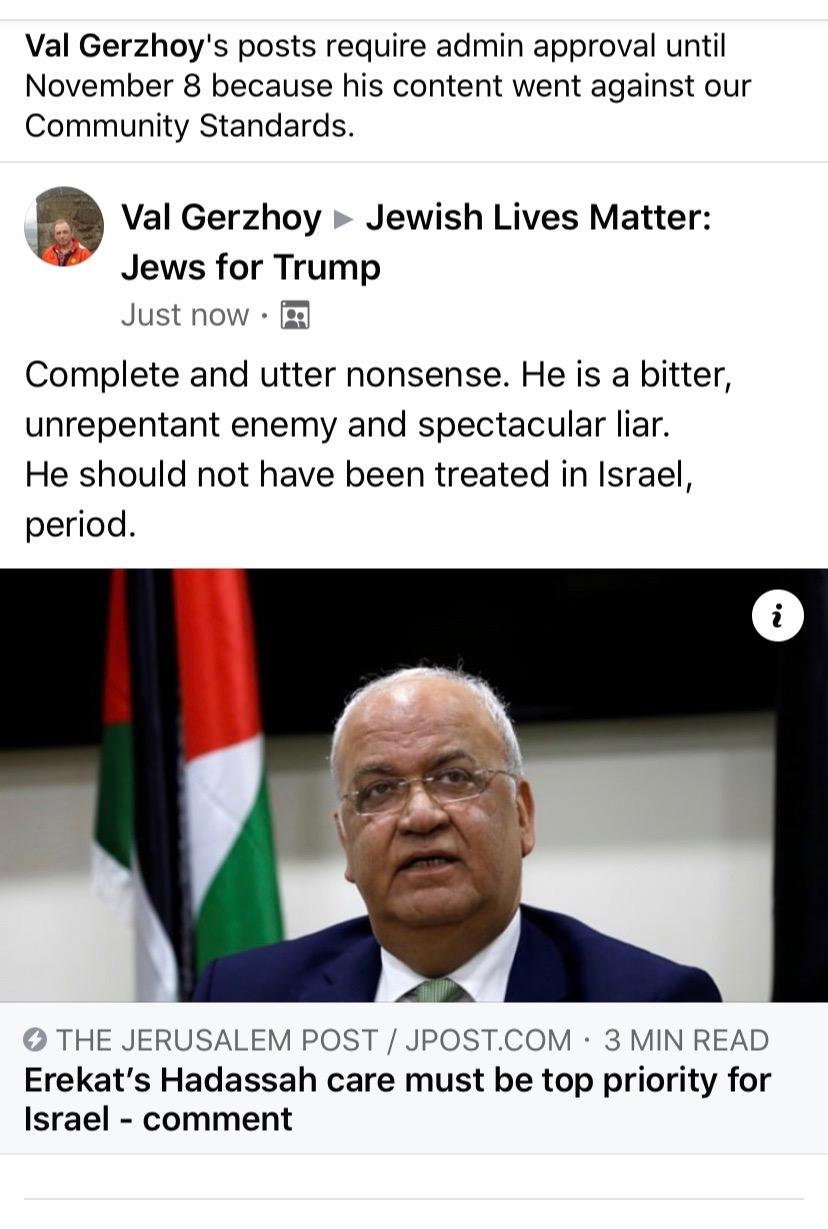 Facebook and other tech giants, such as Google and Twitter, have come under fire for their decisions on what content to allow and not allow on their sites. In particular, conservatives have grown upset over these platforms for what they consider targeting conservative news and viewpoints on their platforms. For example, Facebook and Twitter recently decided to block links to a story by the New York Post concerning former U.S. Vice President Joe Biden’s son, Hunter Biden.

On the other side, Democrats have complained that the social-media companies have not done enough to police their platforms for extremism, including anti-Semitism and Holocaust denial. Both Twitter and Facebook announced this month they would remove content that denies the Holocaust.

As part of the Communications Decency Act of 1996, Section 230 provides immunity for website publishers from third-party content. In the case of tech giants such as Facebook and Twitter, it spares the social-media sites from being held liable for posts, photos and videos they allow or remove. However, many lawmakers have come to view the rules as outdated with even Facebook CEO Mark Zuckerberg saying in his testimony on Oct. 28 that he believes it would be necessary to “update the law.”

“Democrats often say that we don’t remove enough content, and Republicans often say we remove too much,” he told Congress. “The fact that both sides criticize us doesn’t mean that we’re getting this right, but it does mean there are real disagreements about where the limits of online speech should be.”

‘The law must be revised (or interpreted) to provide protection’

With over 2.7 billion active users, Facebook is the biggest social network worldwide. While many people use the platform to connect with family and friends, post pictures (babies and dogs are always hits) or promote their business, others use the platform as a primary source of news and updates.

While the First Amendment provides protections regarding government action, social media has now in a sense taken over the role of “the public square” in American life, especially during the pandemic, according to Marc Greendorfer, founder of the Zachor Legal Institute.

“While social-media companies are not government agencies, they often provide governmental or quasi-governmental services, sometimes as monopolists,” he told JNS. “Social media is now the primary forum that Americans use to engage in First Amendment activity, and the law must be revised (or interpreted) to provide protection against viewpoint discrimination on these platforms.”

A Facebook company spokesperson did not provide any details as to why these particular pro-Trump groups were banned or what constitutes a violation of their policies.

Ettie Kryksman, who serves as administrator and founder of the Facebook groups “Jewish Lives Matter: Jews for Trump” and co-administrator of “Jewish Republicans for Trump,” told JNS that while her group has not been banned so far, they are “continuously being targeted by Facebook Fact Checkers finding ‘false’ or ‘partially false’ content, or ‘missing information,’ on perfectly legitimate posts.”

She said, for example, “posts portraying [Joe] Biden unfavorably are deemed false, such as the post of Biden in a parking lot campaigning to virtually no one.”

Greendorfer noted that while social-media companies have the right to enforce their own terms of service to ensure that users are not harassing other users or spreading false information, they cannot engage in viewpoint discrimination.

“The problem is that much of the fact-checking is done in a biased manner, which arguably is in and of itself a violation of the platforms’ terms of service,” said Greendorfer.

Indeed, questions are being raised on the neutrality of these social-media companies. For example, a member of Facebook’s election integrity team, Anna Makanju, formerly worked for Biden, while the Biden campaign also hired a former Facebook executive, Jessica Hertz, for his transition team.

‘It’s critical to have an ability to communicate’

Eugene Luskin, the moderator of the Russian American Ashkenazi Jews Facebook group, told JNS that his family had escaped both Nazism and Stalinism, and that he could never have imagined “a total crackdown on the freedom of speech yet again this time in this wonderful country.”

He further explained that for the most part, these online groups serve as a social forum for Russian Americans Jews, especially during the pandemic when they cannot meet in person. 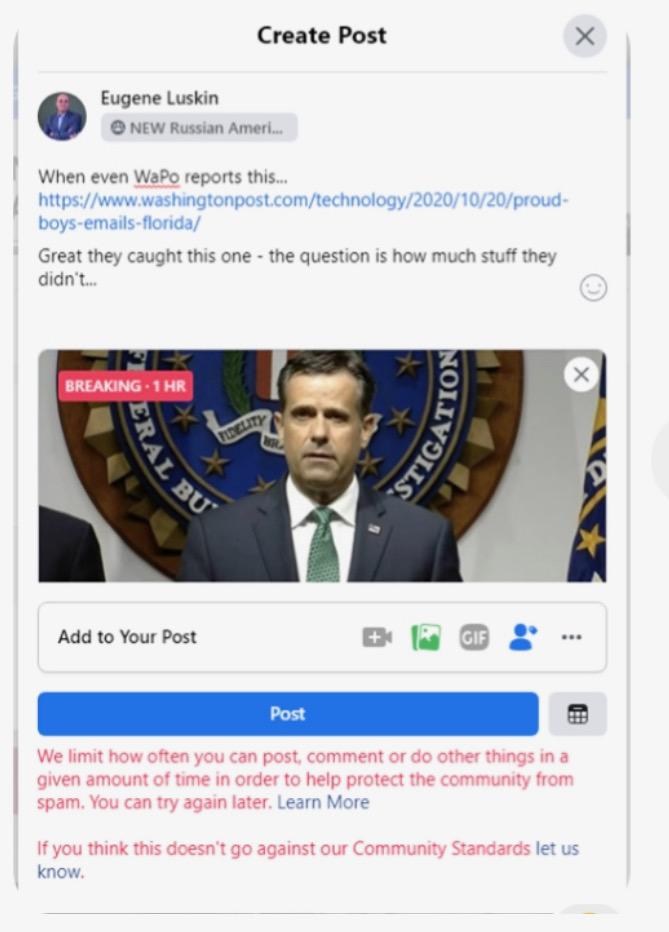 “For many Jewish immigrants and refugees here, it’s critical to have an ability to communicate, to discuss things. There are many platforms and tools for such communication, but many of us moved to Facebook as the most convenient and trusted one,” he said.

“We have several groups on Facebook that unite many American-born Jews and Jewish refugees/immigrants from ex-USSR and Eastern Europe territories. For many, especially elderly retired people, these were the main platforms for communication with friends, which is even more critical for their mental health during the pandemic,” he said.

“It doesn’t matter which views or preferences each one of us has,” stressed Luskin. “The way it’s handled today is a slippery slope that will end up in the same place where we were born.”

Indeed, Greendorfer said that “when fact-checking is used to justify viewpoint discrimination, social-media companies should not be provided with the protections of federal or state laws.”