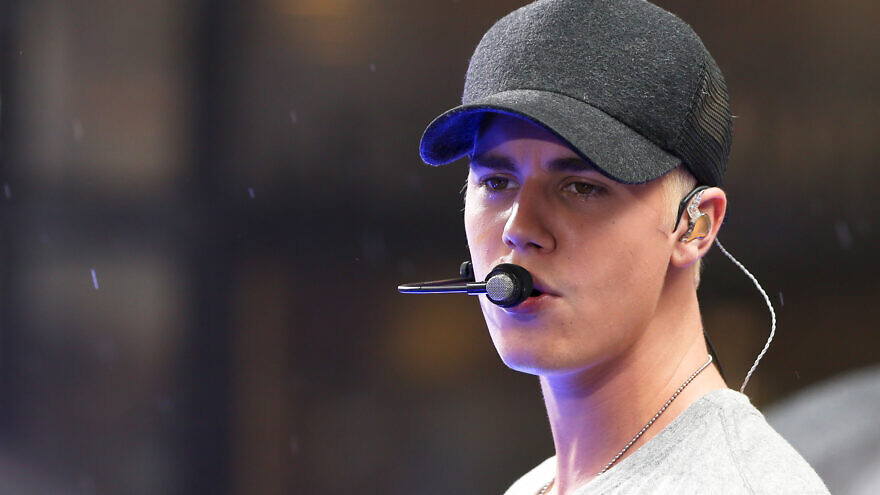 (August 12, 2022 / JNS) The president of the Conference of European Rabbis is calling out pop-star Justin Bieber for performing what some thought was a Nazi salute during a concert in Helsinki.

During his Aug. 9 show, Bieber marched high with his knees across the stage holding a microphone with his arm stretched out in a manner that some claimed was similar to the “Sieg Heil” gesture of the Nazi Party. The concert was part of Bieber’s world tour, which includes a performance in Israel in October.

“Bieber has been filmed at other concerts marching in a similar way, and the move is part of an apparent in-joke between the singer and his legion of ultra-loyal fans,” according to The Times of Israel.

However, Rabbi Pinchas Goldschmidt, president of the Conference of European Rabbis, was enraged by Bieber’s actions.

“The famous singer slapped millions of Jews around the world in the face when he chose to make the ‘Sieg Heil’ gesture, which symbolizes identification with the values ​​of the Nazi Party and its leader, murder of the Jewish people, Adolf Hitler,” he said in a statement to Israel’s Arutz Sheva.

The rabbi demanded an explanation from the singer and called on Israel to cancel Bieber’s Oct. 13 concert in Tel Aviv in response to his “humiliating” actions.

“It is unthinkable that a singer with tens of millions of fans and followers around the world allows himself to adopt such conduct on European soil soaked with the blood of millions of Jews and other minorities, who were brutally murdered by the Nazi oppressor,” said Goldschmidt. “Using this movement on such a large platform is a symbol of victory for anti-Semites and provides an incentive for future oppressors.”

The company promoting Bieber’s upcoming concert defended the singer and said his actions should not be compared to those of the Nazis.

“These are dance moves … [they] are meant to entertain,” said a representative of Nidar Oz Communications, according to The Times of Israel. “Not everything has to do with the Jewish people, with all the love we have for ourselves.”

The Creative Community for Peace, a nonprofit entertainment industry organization that seeks to educate about anti-Semitism in the arts, similarly denounced similarities between Bieber and the Nazis.

A Nazi salute “is not at all what Bieber appears to be doing and labeling it as such is wildly unhelpful,” the group wrote on Twitter. “There is a huge problem of anti-Semitism in entertainment and sports but this is not it. Let’s stick to fighting the real battles.”