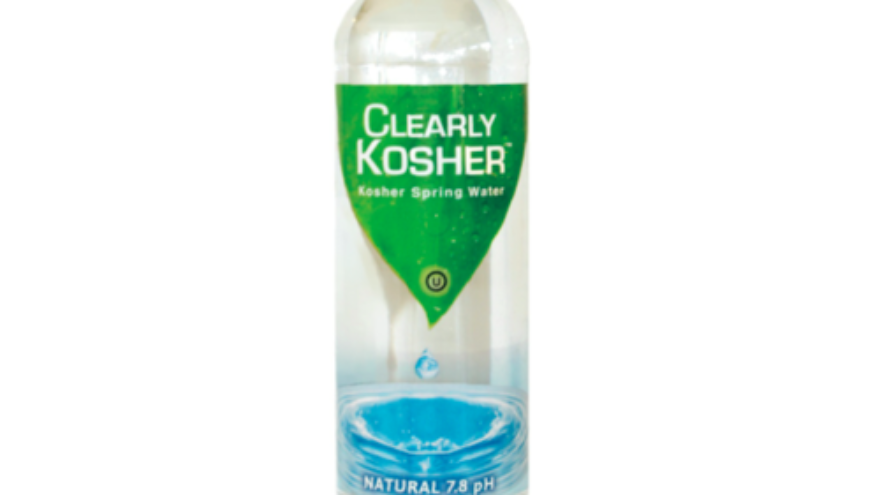 A new brand of bottled water recently hit grocery store shelves, and its tagline is reminiscent of the 1965 catchphrase for Hebrew National hot dogs, “We answer to a higher authority.” Fifty years later, Clearly Kosher® says its water is, “Better than perfect.”™

What might not be so clear to Jewish consumers, however, is why water would need to brand itself as “kosher.” Naturally, Clearly Kosher owner Angela Frieders has an answer.

“We are all God’s people, and we really just want to bring the health benefits and awareness of kosher to all people,” Frieders, who lives in the Chicago area, tells JNS.org.

Frieders, who created the new brand with partner Dar Feldott during a lunchtime conversation in 2013, recalls that the business partners were eating pickles and drinking water when they noticed the kosher symbol.

“We asked ourselves, ‘What makes this jar of pickles kosher, versus this bottle of water?’” says Frieders, who then embarked on a mission to understand the value of something being kosher. What she found is that non-kosher items could contain unknown ingredients, such as carmine (also called crimson lake), which is made from the crushed bodies of cochineal beetles.

“It was like, ‘Wow!’” Frieders says. “It was appalling to us that something like that would be allowed. … The brand name Clearly Kosher came to us. It will be evident to the consumer that it is kosher, and being kosher gives consumers confidence and peace of mind because of the kosher standard of quality and food safety.”

Clearly Kosher is certified by the Orthodox Union (OU), whose circled-U symbol is a fixture on kosher products. But for those seeking to observe Jewish dietary laws, does water require kosher certification (in Hebrew, a hechsher) to begin with?

“It is all marketing,” says Dr. Avrom Pollak, president of the Star-K kosher certifier.

Pollak explains, “Most people who buy kosher are not necessarily people who care about kosher or eat kosher all the time. There is a perception among consumers in general that when something is kosher certified, it is enhanced—that may or may not be true.”

Rabbi Moshe Elefant, chief operating officer of the OU’s Kashrut Department, expressed a similar sentiment. He says that when his organization is approached by companies whose products would not inherently need a hechsher, the OU’s kosher certification team tells the companies that the certification is not necessary to pursue. But if a company still wants certification and the OU agrees to take on the project, the OU will visit its production plant on an unannounced and regular basis and provide oversight.

“Many consumers like that the [company’s] plant is being seen by a separate set of eyes that doesn’t get paid by the company directly,” Elefant tells JNS.org.

Elefant says that products sometimes request kosher certification because that will make Orthodox Jews more likely to buy them. Then, there are rare occasions when even products that are assumed to be kosher—without certification—can experience challenges if they are not rabbinically supervised.

“Many years ago, one of our senior field people from Chicago went into a facility that bottles water and discovered that they pasteurize all the water before bottling it,” says Elefant. “They were pasteurizing it on the same machine they use for milk. That makes all the water dairy. It’s not the case that all water is or could be dairy, but if someone wants to be 100 percent sure, buy bottled water with a hechsher.”

When it comes to the kosher industry, nothing is as simple as it seems, says the Star-K’s Pollak. He says there are many unexpected products that need a hechsher, such as lubricants.

“If lubricants have food contact, then they most likely need kosher certification,” says Pollak.

Earlier this month, the VaadKC kosher certifier in Kansas City disseminated an email educating the community about locally distributed products that the average observant Jew might not know require kosher symbols.

“The VaadKC supervises production by CK Enterprises of a number of cleaning products used in the food manufacturing industry,” reads the email. “While these are not products you would look for or find on a grocery shelf, these specialty items play an important role in ensuring kosher… from beginning to end in the food-production process.”

The email goes on to explain that when it comes to rotisserie or other cooked chicken, not only does the chicken itself need to be kosher, but its packaging also does. A VaadKC partnership with Robbie, producer of the Hot N Handy® Pouch, guarantees the chicken is kosher—inside and out.

The Star-K is actively involved in certifying electronic appliances, though this certification is less about kosher consumption and more about approving the appliances’ usage for observant families on Shabbat and Jewish holidays.

“Appliances have become so complicated that they have become very unfriendly to Orthodox Jewish households,” Pollak says.

Star-K engineers work with many major appliance manufacturers to ensure that these items remain user-friendly for observant homes, and the Star-K offers its certification to appliances that do not break the rules of Shabbat.

Pollak notes that companies are generally accommodating on the issues because research indicates Jewish households buy more—and more expensive—appliances than the average household.

“We get all sorts of requests for pet food,” says Elefant. “We say no. As far as I am concerned, there is no difference between a Jewish dog and a non-Jewish dog.”

Maayan Jaffe is a freelance writer in Overland Park-Kan. Reach her at jaffemaayan@gmail.com or follow her on Twitter, @MaayanJaffe.