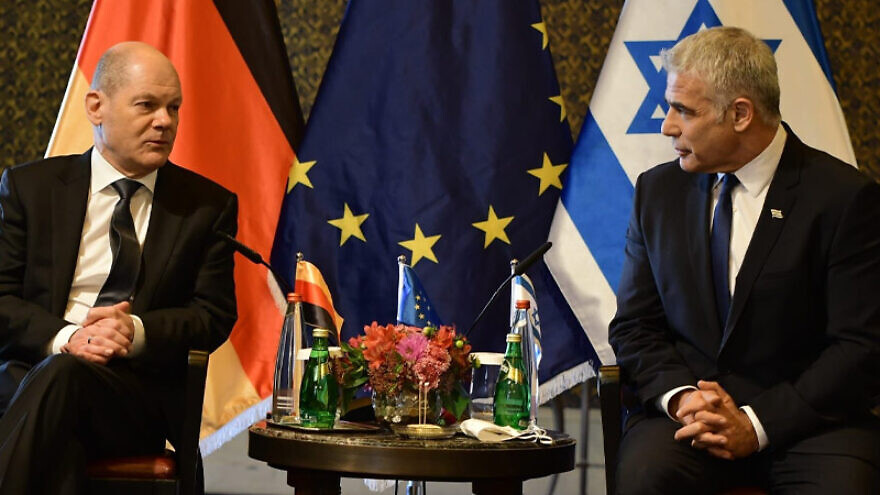 (September 12, 2022 / JNS) Israeli Prime Minister Yair Lapid on Monday praised what he said was Germany’s commitment to Israel’s security as a Jewish and democratic state, adding, “Israel, for its part, will play a role in building Germany’s new defense force, mainly in the field of air defense.”

Standing in Berlin alongside German Chancellor Olaf Scholz, Lapid told reporters that Israel and Germany are building a partnership.

“This visit aims to conclude the final details of a strategic partnership agreement between Israel and Germany. It follows the strategic dialogue between our teams in Jerusalem. This partnership has economic and security benefits,” he said.

Addressing Iran, Lapid said that “returning to the nuclear agreement under the current conditions, would be a critical mistake. Removing sanctions and pouring hundreds of billions of dollars into Iran will bring waves of terrorism, not only to the Middle East but also across Europe.”

He added, “There is another way. A better way forward for the Middle East. It is the path of the Abraham Accords and the Negev Forum. A path based on a shared vision for the region. A vision not of war, extremism and terrorism but of peace, tolerance and cooperation.”

The Negev Forum is a framework for promoting economic and security cooperation between Israel and its Arab allies.

At the start of his remarks, Lapid said, “I am the son of Tommy Lapid, a Holocaust survivor from the Budapest Ghetto. I am the grandson of Bela Lampel, who was murdered at the Mauthausen concentration camp. And now I stand here on German soil as prime minister of the Jewish state.”

He continued, “The deep ties between our countries, Mr. Chancellor, are proof that humanity always has a choice. Evil can be replaced by friendship.”

After the press conference, Lapid said he had presented the chancellor with “sensitive and relevant intelligence information” on the Islamic Republic’s nuclear program.

The two men held a private meeting that lasted about an hour, the Prime Minister’s Office said.

During the meeting, Lapid emphasized the importance of continuing the struggle against Iran’s nuclear program, as well as expanding strategic cooperation with Germany.

He praised Steinmeier for his support of Israel in the battle against anti-Semitism, as well as his successful efforts to negotiate a compensation agreement with the families of those killed in the 1972 Munich Olympic Games massacre.

Lapid also met with German Foreign Minister Annalena Baerbock. They discussed the regional and security challenges posed by Iran, according to the Israeli Prime Minister’s Office. They also addressed “tightening bilateral ties in the fields of—inter alia—security, the economy, technology and cooperation in the international arena,” said the PMO.