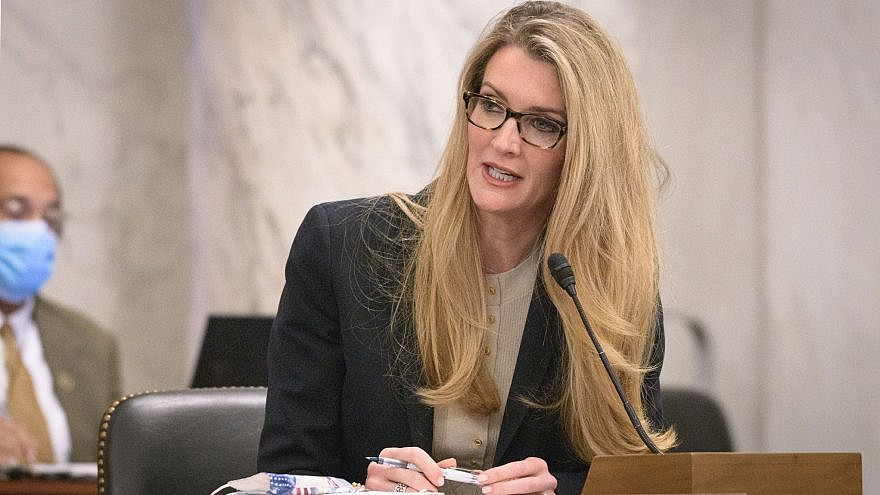 (December 14, 2020 / JNS) Sen. Kelly Loeffler, the Republican running in one of two Senate runoffs in Georgia on Jan. 5, has disavowed a former neo-Nazi leader after posing with him for a photo last week at a campaign event.

Campaign spokesperson Stephen Lawson told The Associated Press on Sunday that Loeffler didn’t know who Chester Doles was when she took a picture with him at a campaign event on Friday.

“Kelly had no idea who that was, and if she had, she would have kicked him out immediately because we condemn in the most vociferous terms everything that he stands for,” said Lawson.

The campaign of her Democratic opponent, Rev. Raphael Warnock, criticized the development.

“While Kelly Loeffler runs a campaign based on dividing and misleading Georgians, she is once again trying to distance herself from someone who is a known white supremacist and former KKK leader who nearly beat a black man to death,” said campaign spokesperson Michael Brewer in a statement. “There’s no acceptable explanation for it happening once, let alone a second time.”

Doles has a criminal record that includes beating a black male nearly to death because he was seen accompanying a white woman and violating federal gun laws.

Doles attended the 2017 “Unite the Right” rally in Charlottesville, Va., marked by violence between far-right parties and protesters, which led to the death of 32-year-old Heather Heyer after a 20-year-old man from Ohio rammed a crowd of people with his car.

Doles told the AP on Sunday that he had “publicly renounced racism on several occasions in the past couple of years,” adding that he attended a “redemption service,” standing “in front of an all-Black congregation and told my story and renounced all racism and asked for G-d’s forgiveness.”

Doles posted the picture of him and Loeffler to his account on VK, a Russian social networking site.