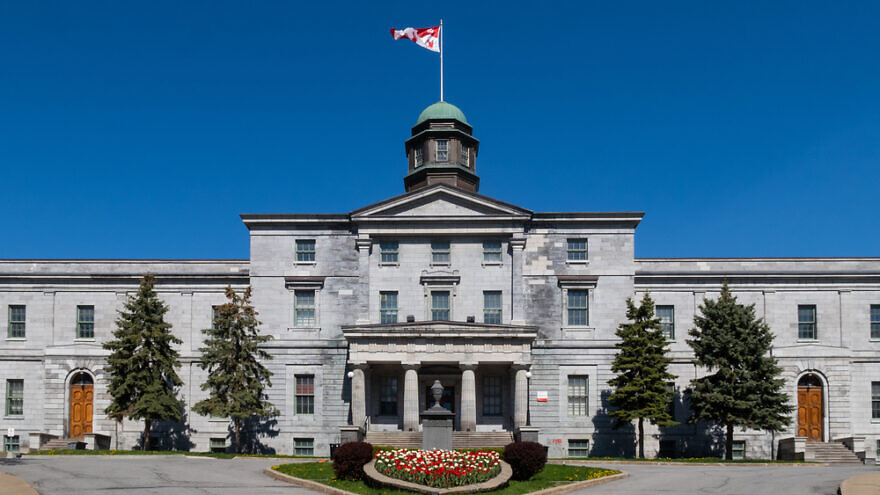 (March 25, 2022 / JNS) Administrators at McGill University in Montreal are demanding that the Student Society of McGill University (SSMU) take “remedial action” after the passage of a Palestine Solidarity Policy earlier this week.

Saying that the policy “calls for several actions that echo key tenets of the Boycott, Divestment Sanctions movement,” Fabrice Labeau, deputy provost of student life and learning, said he was “saddened to witness the unfolding of an initiative that can only bring more division to our community.”

“Robust debate is key to what we do and who we are as a university,” he wrote in a letter to students and staffers. “But such debate cannot be carried out at the expense of respect and inclusion.”

More than 70 percent of student voters agreed to the adoption of the Palestine Solidarity Policy, which says, in part, that SSMU will make “at least one public statement each semester, including a statement on ‘Nakba Day,’ reaffirming the SSMU’s solidarity with Palestinian students and with Palestinian liberation from settler-colonial apartheid. Each of these statements shall be authored by the SSMU Palestine solidarity committee.”

Labeau has asked the leadership of the student senate “to take prompt and appropriate remedial action, consistent with SSMU’s obligations under its Memorandum of Agreement” with the school. If they fail to do so, said the provost, the university will “terminate” the agreement.

While it’s not clear what actions SSMU needs to take or how terminating the agreement will affect the student group, in its press release, B’nai Brith noted that earlier this month “in a first-in-Canada development, the provost of the University of Toronto indicated that she would withhold some fees from the local Graduate Students’ Union over its practice of forcing students to fund the antisemitic Boycott, Divestment and Sanctions (BDS) Movement.”

Jonah Fried, a Jewish student at the school and Israel supporter who rallied against the Palestine policy, told JNS: “I applaud McGill for upholding SSMU’s equity principles where its leaders could not. This was the right response, and I commend the administration for its swift action.”

In a statement, CEO of B’nai Brith Canada Michael Mostyn said “we are encouraged by this early and principled statement of intent by the McGill administration.

“No university should stand for anti-Semitism or votes contrary to rule of law, and funds should not be provided to student organizations that are guilty of this conduct,” he continued. “B’nai Brith will remain actively engaged in this issue until justice is done and SSMU rescinds its extreme attacks against Jewish life on campus.”

Nearby Concordia University also passed an anti-Israel measure this week, no update from that administration has been noted.