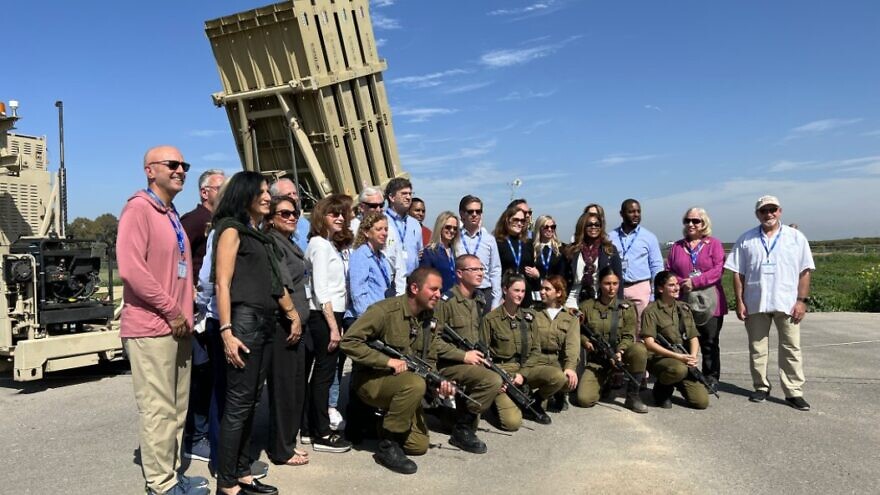 (February 24, 2022 / JNS) The Knesset resembled the halls of Congress on Monday as both Republican and Democratic delegations from the U.S. House of Representatives toured the legislature and met with senior Israeli leaders. The delegations came under the auspices of the American Israel Education Foundation (AIEF), a nonprofit arm of the American Israel Public Affairs Committee (AIPAC), which sponsors biennial visits of freshman members of Congress to the Jewish state.

A total of 41 U.S. lawmakers — 27 Republicans and 14 Democrats — participated. The fact that the Democratic group is smaller only reflects that the incoming group of freshman Democrats in Congress is smaller than the Republican contingent, a source from AIPAC told JNS.

The delegations, which will be in Israel for the week, are the first to come under AIEF auspices since the COVID-19 pandemic began. It’s also the first time that Republican and Democratic delegations are in Israel at the same time for the full duration of their trips. In past years, the delegations would overlap for one to two days and participate in bipartisan events.

The mission of the trips is to expose the representatives to the complexities of the region; the trip includes a visit to Palestinian Authority-governed territory. Given that the delegations include a wide range of lawmakers with varying levels of knowledge about the region, trips start with the basics, including geography and visits to border areas.

“These trips provide members of Congress from both parties with valuable information about the importance of the U.S.-Israel relationship through firsthand experiences in Israel, briefings by experts on Middle East affairs, and meetings with Israeli and Palestinian leaders,” AIPAC spokesman Marshall Wittmann told JNS.

Republican and Democratic delegations met separately with Speaker of the Knesset Mickey Levy, Minister of Foreign Affairs Yair Lapid and former Prime Minister and now Opposition Leader Benjamin Netanyahu. The discussions, which were closed to the press, focused on regional and world issues, including Iran and Ukraine.

“The United States is our greatest ally and we owe so much for its resilient standing by our side. The bipartisan support for Israel’s right to pursue a peaceful and safe livelihood for its people is a cornerstone of Israeli national security,” said Levy, who thanked the members of Congress for passing a September bill to fund the restocking of interceptors for Israel’s Iron Dome missile defense system after it was depleted in the May 2021 conflict with Hamas in the Gaza Strip.

“I also send my gratitude to AIPAC for its vital work in strengthening the ties between the Knesset and the Congress and its assistance in advancing Israel’s interests in Washington,” he said. After meeting the Republican delegation, both Lapid and Netanyahu tweeted their appreciation for the visit. “Whenever I meet with members of Congress—Democrats and Republicans—I know I’m among true friends of Israel and strong supporters of the enduring alliance between our two democracies,” Lapid said.

The Republican delegation met earlier in the day with Prime Minister Naftali Bennett, who discussed his views on diplomatic, security and regional issues, especially the ongoing Iran nuclear talks in Vienna.

Democrats expressed their appreciation for Israel in short video clips on AIPAC’s Instagram account, among them Rep. Ritchie Torres (D-N.Y.), who said in a post on Monday, “There’s no country that is the target of more disinformation than the State of Israel. So it’s more urgent than ever for people to come to the State of Israel. See the reality on the ground with your own eyes, and then come to your own conclusions.”

Rep. Adriano Espaillat (D-N.Y.) said in a video post that he is “concerned about the safety and wellbeing of Israel.” Espaillat also tweeted a pro-Israel message earlier on Monday from the Western Wall.

The pro-Israel messages from the Democratic delegation serve as a rejoinder to comments by Rep. Alexandria Ocasio-Cortez (D-N.Y.), who suggested Israel cages Palestinian children while at a Feb. 13 rally in Austin, Texas, promoting the Green New Deal.

“I don’t believe that a child should be in a cage on our border, and I don’t believe a child should be in a cage in the West Bank,” Ocasio-Cortez said, the latest in a string of anti-Israel comments by the Democratic congresswoman. Ocasio-Cortez is a member of “The Squad,” a group of progressive House Democrats who are known for their criticism of Israel.