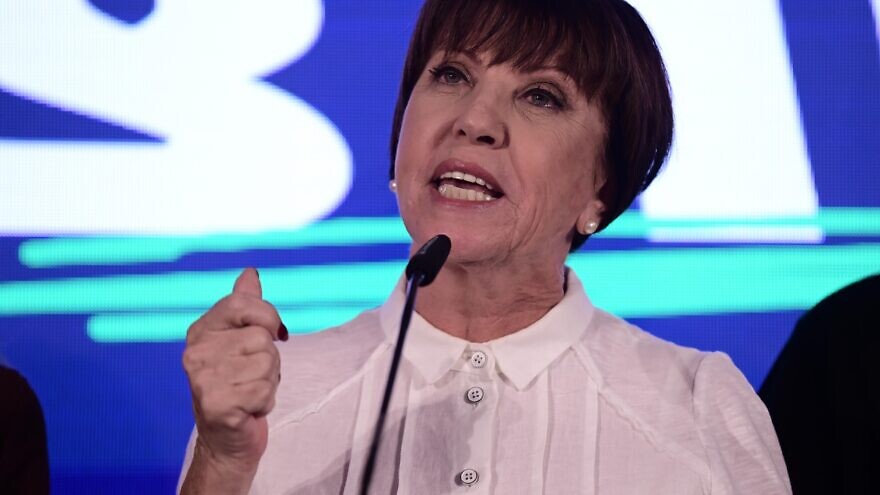 (November 3, 2022 / JNS) Zehava Galon, leader of the far-left Meretz Party, addressed supporters on Thursday as final hopes faded that the party might still succeed in entering the next Knesset.

It’s the first time since its formation in 1992 that the party has failed to pass the electoral threshold.

“Dear supporters, this is a very difficult moment for me and my friends. The results of the elections are a disaster for Meretz, a disaster for the country and also a personal disaster,” she said in a video posted to social media.

Galon, a former Meretz chair who had retired from politics, returned to win the Meretz primary ahead of Tuesday’s national election.

“A few days before the election, I had exactly this nightmare in my head: a Knesset void of Meretz. In it is found the party of [the late Kach leader Meir] Kahane [a reference to Otzma Yehudit, part of the Religious Zionist Party], [but] the party of Aloni and Sarid, no,” she said, naming Shulamit Aloni and Yossi Sarid, two former leaders of Meretz.

Criticizing Labor chair Merav Michaeli for failing to agree to run in the election on a joint slate with Meretz, and Prime Minister Yair Lapid of the Yesh Atid Party for focusing on increasing the size of his party at the expense of smaller ones in his coalition, Galon said:

“I pushed for a union with Michaeli and warned about the ‘drinking’ of [Knesset] mandates by the prime minister. I said that if we are not careful the entire camp will pay the price. Unfortunately, our voters bought the campaign of the ‘Big Party’ and preferred to strengthen Yair Lapid against [Netanyahu].”

The right-wing bloc led by opposition leader Benjamin Netanyahu holds 64 seats as of the latest count, more than enough to form a government in Israel’s 120-seat parliament.