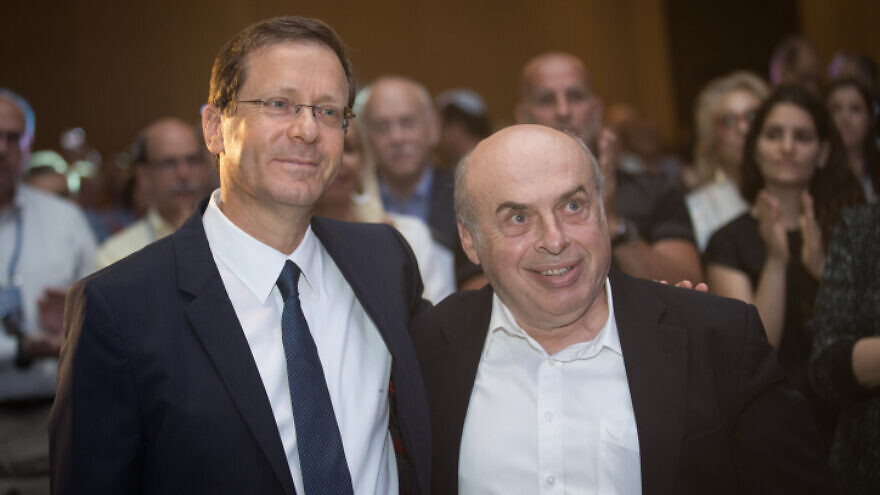 Incoming Jewish Agency chairman Isaac Herzog with outgoing chairman Natan Sharansky at the board of governors conference of the Jewish Agency at the Orient Hotel in Jerusalem on June 24, 2018. Photo by Hadas Parush/Flash90.
Spread the word.
Help JNS grow!
Share now:

(December 10, 2019 / JNS) Natan Sharansky, the former Russian Prisoner of Zion who would later become head of Israel’s Jewish Agency, was named on Tuesday as the winner of the 2020 Genesis Prize in recognition of his “extraordinary lifelong struggle for human rights, political freedom and his service to the Jewish people and the State of Israel.”

The Genesis Prize Foundation will confer the $1 million prize to Sharansky at an award ceremony to be held on June 18 in Jerusalem.

The prize, which was once dubbed the “Jewish Nobel” by Time magazine, was established in 2012 to honor “extraordinary individuals for their outstanding professional achievement, contribution to humanity and commitment to Jewish values.”

Sharansky said he would donate the award money to a worthy cause, in keeping with the tradition established by previous award winners, including philanthropist Robert Kraft, violinist Itzhak Perlman and New York City Mayor Michael Bloomberg.

In 2018, the actress Natalie Portman was awarded the honor, though she refused to attend the award ceremony so as not to be perceived as showing public support for Israeli Prime Minister Benjamin Netanyahu.

Isaac Herzog, current head of the Jewish Agency for Israel and the head of the prize selection committee, called Sharansky “a true Jewish hero and an outstanding human being,” adding that the Genesis Prize “rightfully compliments the Israel Prize, the state’s highest honor.”

Following the announcement, Sharansky expressed his gratitude to the Jewish state.

“Having been raised as an assimilated Jew in the Soviet Union, I discovered my Jewish identity and belonging to the Jewish people thanks to Israel,” he said. “This connection to Israel gave me and other refuseniks the strength to fight for the rights of Jews, as well as other people whose essential freedoms had been denied.”

The Jewish people’s unity and connection to Israel are more important than ever, he added.

“Today, when anti-Semitism is on the rise—both from the political left and from the right—the unity of the Jewish people and our connection to Israel is very important,” said Sharansky. “We need to unite and combat the scourge of anti-Semitism and efforts to delegitimize Israel together, as one people.”

Sharansky’s nine-year imprisonment in Soviet labor camps led to international protests, particularly by Jewish communities in the United States and Israel. He was finally released in 1986 after heavy international pressure, including U.S. diplomatic efforts and efforts led by his former wife, Avital Sharansky, and immediately emigrated to Israel.