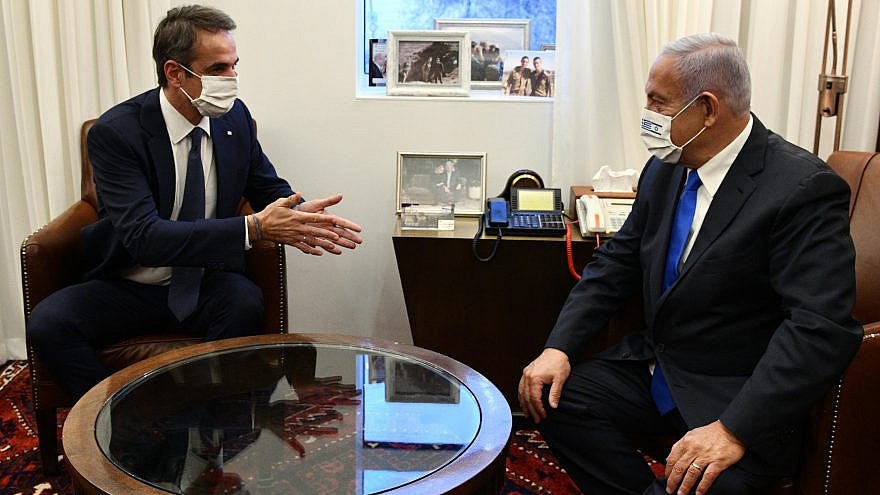 (February 9, 2021 / JNS) Israeli Prime Minister Benjamin Netanyahu met on Monday with Greek Prime Minister Kyriakos Mitsotakis, who was visiting Jerusalem to discuss bilateral relations and the resumption of tourism between the countries.

“We’ve just discussed a green passport arrangement where Israelis, when we lift the restraints on flights, would be able to go to Greece without any limitations. No self-isolation. Nothing,” said Netanyahu, according to a statement from his office. “And I think this is good news for all of us. Our cooperation is good for our countries. It’s good for the entire region.”

The prime ministers also discussed Mitsotakis’s “innovative ideas” about the EastMed pipeline, which will connect the Leviathan gas fields in Israel’s territorial waters to Cyprus, Greece, and eventually, Europe.

The Greek prime minister also offered to participate in the clinical trials for EXO-CD24, an anti-coronavirus drug being developed by a team at Tel Aviv Sourasky Medical Center, according to the statement.

Prior to his meeting with Mitsotakis, Netanyahu received an update from the team’s leader, professor Nadir Arber.

“I asked professor Arber to come to my office today. He did. Two hours later my friend Prime Minister Mitsotakis comes to my office and more or less the first question he asked me was, ‘Can you tell me about this miracle drug?’ ” said Netanyahu.

“We called professor Arber and Prime Minister Mitsotakis volunteered that Greece—their leading hospital—would partake in the clinical trials” for the drug, he said.

“I think this is an example of our cooperation in forging ahead to new areas,” he added.

Following the meeting, the two countries’ tourism ministers signed a cooperation agreement. Greek Tourism Minister Harry Theoharis said that tourists from Israel are particularly important to Greece, which hosted nearly 715,000 Israeli visitors in 2019, making Israel the ninth country in the world in terms of tourist arrivals in Greece.