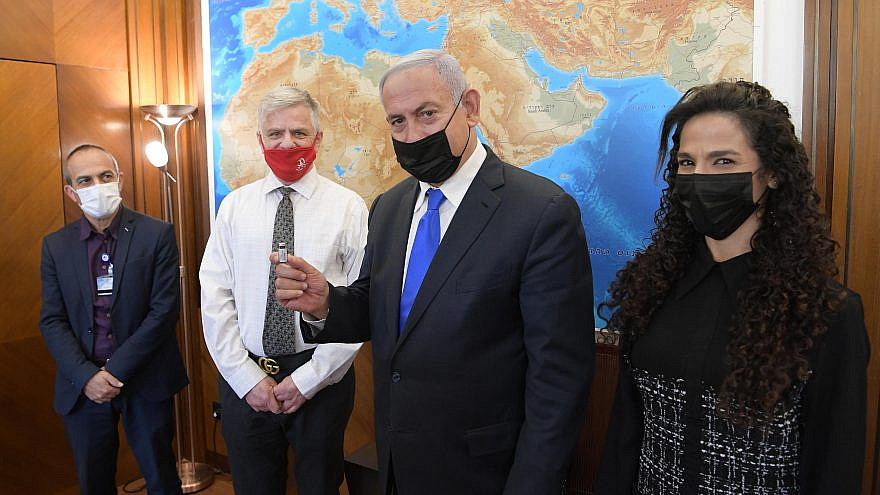 (February 9, 2021 / JNS) Israeli Prime Minister Benjamin Netanyahu met on Monday at his office in Jerusalem with the head of the research project at the Tel Aviv Sourasky Medical Center (Ichilov Hospital), where an anti-coronavirus drug is being developed and has shown promising results.

“If this succeeds, it will be huge, simply huge,” Netanyahu said to professor Nadir Arber about the new drug, called EXO-CD24, according to the Prime Minister’s Office. “This is of global significance. This is amazing. I wish you success. If you need anything, say it and we will help you. This little thing could change the fate of humanity. This is amazing. Good luck.”

Arber said that the project involved out-of-the-box thinking, and explained that the drug could be produced quickly and efficiently.

In a subsequent meeting on Monday, Netanyahu discussed the drug with Greek Prime Minister Kyriakos Mitsotakis, who is currently visiting Israel. According to the PMO, Mitsotakis expressed great interest in the drug and offered that a leading hospital in Greece take part in the clinical trials in the framework of bilateral cooperation between the two countries.

Last week, Ichilov researchers announced that 29 out of 30 patients with moderate-to-severe cases of COVID-19 who were administered EXO-CD24 experienced a marked recovery in just two days, and were released from the hospital three to five days later. The remaining patient also recovered but in a longer time span.

The researchers explained that the drug works by fighting the cytokine storm, a potentially life-threatening systemic inflammatory syndrome that is believed to be responsible for many coronavirus deaths.

“The medicine is administered through inhalation, once a day, in a procedure that takes only a few minutes, for five days,” said Arber.

“It is based on exosomes that the body is releasing from the cell membrane and uses for intercellular communication. We enrich the exosomes with the 24CD protein, which is known to play an important role in regulating the immune system,” according to Dr. Shiran Shapira—the director of the lab where it is being tested—who has been conducting research on CD24 protein for decades.

Shapira was among those present, along with Ichilov CEO Ronni Gamzu (formerly Israel’s coronavirus project coordinator), at Netanyahu’s meeting with Arber.