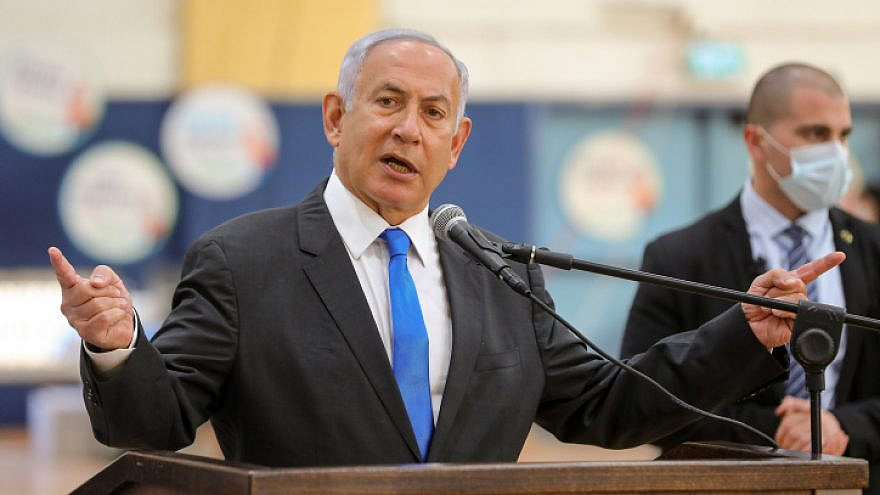 (February 7, 2021 / Israel Hayom) Israeli Prime Minister Benjamin Netanyahu on Saturday accused the International Criminal Court at The Hague of anti-Semitism after it ruled that it has jurisdiction to open a war crimes investigation against Israel.

A three-judge panel at the ICC ruled on Friday that Judea and Samaria, the Gaza Strip and eastern Jerusalem are within its jurisdiction, as “Palestine [is] a State party to the ICC Rome Statute.” The ICC’s 2-1 decision has cleared the way for Chief Prosecutor Fatou Bensouda to open a war crimes probe into IDF actions.

“The ICC has again proved that it is a political body, not a judicial institution,” Netanyahu said on Friday immediately following the decision.

“The ICC ignores the real war crimes and instead pursues the State of Israel, a state with a strong democratic government that sanctifies the rule of law, and is not a member of the ICC,” he said.

“In this decision, the ICC violated the right of democracies to defend themselves against terrorism and played into the hands of those who undermine efforts to expand the circle of peace. We will continue to protect our citizens and soldiers in every way from legal persecution,” he added.

In a video released by his office, the prime minister said, “When the ICC investigates Israel for fake war crimes, this is pure anti-Semitism.”

“It is not a coincidence that both Israel and the U.S. are not members of this deformed body,” he added.

The U.S. State Department on Friday night issued a formal statement objecting to the ICC decision.

“As we made clear when the Palestinians purported to join the Rome Statute in 2015, we do not believe the Palestinians qualify as a sovereign state, and therefore are not qualified to obtain membership as a state, or participate as a state in international organizations, entities, or conferences, including the ICC,” the statement said.

“We have serious concerns about the ICC’s attempts to exercise its jurisdiction over Israeli personnel. The United States has always taken the position that the court’s jurisdiction should be reserved for countries that consent to it, or that are referred by the UN Security Council,” it concluded.

U.S. State Department spokesman Ned Price tweeted that “Israel is not a State Party to the Rome Statute. We will continue to uphold [U.S.] President [Joe] Biden’s strong commitment to Israel and its security, including opposing actions that seek to target Israel unfairly.”

Israeli officials will meet in the coming days to discuss strategy moving forward, including the possibility of a shift away from the current path of refusing to cooperate with the ICC, said Foreign Ministry officials.

Israeli Foreign Minister Gabi Ashkenazi said the ruling “distorts the purpose of the ICC, which has become a political instrument for anti-Israel propaganda. This ruling rewards Palestinian terrorism and the Palestinian Authority’s refusal to pursue negotiations with Israel.”

Following the ruling, Israeli Defense Minister Benny Gantz sent a letter to the Israel Defense Forces Chief of Staff, IDF soldiers and commanders, the director-general of the Defense Ministry and the upper echelon of Israel’s security establishment.

“The decision of the judges at The Hague is grave and has no basis in international law. The proceeding … is conducted without authority and is unfounded,” he wrote.

The decision is intended to serve as a tool for Israel’s enemies, he said, vowing to shield troops from any repercussions.

For its part, the IDF released a statement vowing to continue defending Israeli citizens and backing its soldiers and commanders.

Yisrael Beiteinu leader Avigdor Lieberman also slammed the decision, saying, “At a time when the entire world is dealing with the corona crisis, the ICC has found the time to wage its own war, seeking to undermine Israel’s right to defend itself against terrorism. This is a delusional, outrageous decision.”

The Palestinian Authority, which joined the ICC in 2015 with the explicit purpose of pushing action against Israel, welcomed the ruling.

The decision is a “historic day for the principle of accountability,” the Palestinian Foreign Ministry said in a statement.

Nabil Shaath, a senior aide to P.A. leader Mahmoud Abbas, said the ruling proved that the Palestinians were right to go to the ICC.

“This is good news, and the next step is to launch an official investigation into Israel’s crimes against our people,” he said.

Hamas, which controls the Gaza Strip and seeks Israel’s destruction, also lauded the ruling, saying, “Any decision that contributes to supporting the rights of the Palestinian people and defends their freedom is an appropriate decision.”

Israel’s foreign and justice ministries, meanwhile, vowed to defend all Israelis who come under legal attack from the ICC.

Lilach Shoval and Danielle Roth-Avneri contributed to this report.