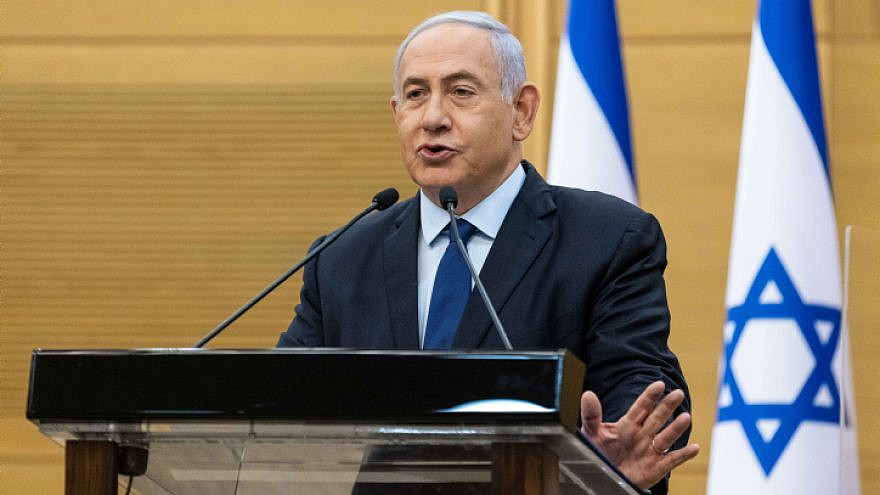 (June 6, 2021 / Israel Hayom) Israeli Prime Minister Benjamin Netanyahu on Sunday called on Knesset lawmakers from all parties to “vote their conscience” if the so-called change coalition presents a new government to the Knesset this week.

Netanyahu, who spoke at the Likud faction meeting at the Knesset, said that the right-wing parties Yamina and New Hope were essentially disenfranchising voters by partnering with the opposition parties on the Left in an effort to end his term through what they have called a unity government.

“We are witnessing an election deceit the likes of which has never happened,” he warned. “People feel—justifiably so—that they have been conned,” he said, referring to Yamina leader Naftali Bennett agreeing to a rotating premiership with left-wing Yair Lapid, leader of Yesh Atid, as part of the prospective government that was declared last week and could be sworn in within days.

“When we talk about a dangerous left-wing government, we are speaking about a government that would forfeit the Negev and won’t be able to resist an American demand for a settlement moratorium,” warned Netanyahu. He added that the Diplomatic-Security Cabinet in the new government would rely on “terror sympathizers and would not be able to fight in Gaza or defend Israel in the International Criminal Court.”
He then called on potential renegades within Yamina and other parties to stay true to their values. “It is still not too late,” he said.

Netanyahu said that the steps taken by some social-media networks to ban posts and freeze accounts of various right-wing activists that had been lashing out against the emerging coalition were an attempt to muzzle free speech.

“We condemn any form of incitement and violence,” said Netanyahu. “Incitement is a call for violence. That is the difference between criticism and incitement. There were some people who have called for my assassination, as well as my wife’s, but no one spoke out against this in public. Incitement to violence should always be off-limits,” he continued, vowing that “no one will silence us, because when a massive constituency feels that it has been conned it has a right and duty to protest using any democratic means at its disposal.”

Even if the Likud loses power because of the Lapid-Bennett deal, he concluded, the fight will continue.

“If, God forbid, the government is formed, we will make sure to topple it very quickly,” he said.