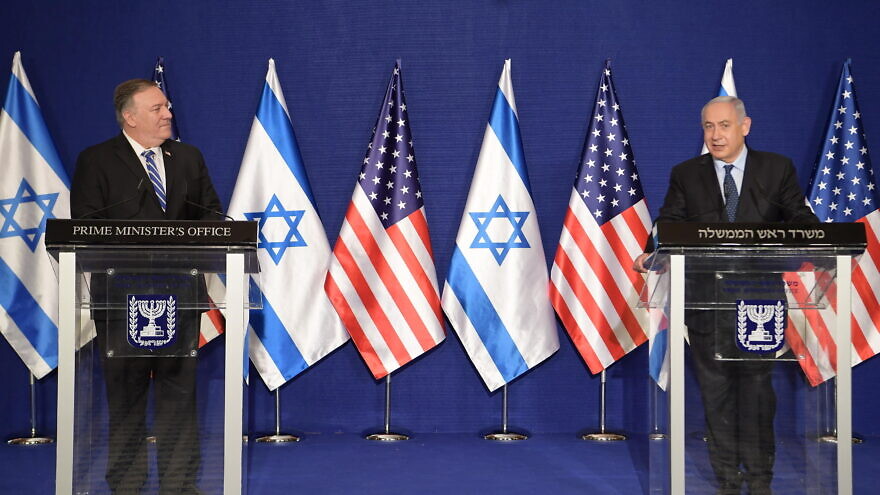 (November 19, 2020 / JNS) Israeli Prime Minister Benjamin Netanyahu on Thursday thanked U.S. Secretary of State Mike Pompeo for his “personal friendship and everything that went along with it.”

Emerging from what he called a “very intimate and productive conversation” in Jerusalem with American’s top diplomat—in Israel on the fourth leg of a seven-country tour of Europe and the Middle East—Netanyahu listed the ways in which the current administration in Washington has brought the U.S.-Israel alliance to “unprecedented heights.”

“Thanks to President [Donald] Trump, the U.S. recognized Jerusalem as Israel’s capital and moved its embassy here,” he said. “Thanks to President Trump, the United States recognized Israeli sovereignty over the Golan Heights … pulled out of the dangerous nuclear deal with Iran, placed crippling sanctions on the Iranian regime … eliminated the mega-terrorist Qassem Soleimani … proposed the first truly realistic plan for peace between Israelis and Palestinians and … Israel was able to forge peace with three Arab countries: the UAE [United Arab Emirates], Bahrain and Sudan.”

Netanyahu also expressed gratitude to Pompeo for his tenure as head of the CIA, during which intelligence cooperation between the United States and Israel “was made stronger than ever, enhancing the security of both our countries,” and said that under Pompeo’s leadership at the State Department, “U.S. representatives at the U.N. and other international forums have unabashedly defended Israel with no apologetics and no artificial correctives. Just defended Israel. Defended what is right. Defended what is true.”

He then pointed to Pompeo’s role in having “firmly stood up to the perversion of justice at the ICC [International Criminal Court],” and for “reject[ing] the assumptions about the legal status of Israeli communities in Judea and Samaria.”

Referring to the 12-point policy manifesto against the Iranian regime that Pompeo announced in May 2018 as he assumed the leadership of the State Department, Netanyahu said that “the tyrants of Tehran deserve no free passes. And for all this and for much more, Israel is grateful to you. I am grateful to you.”

He began his statements by mentioning that he had gifted Pompeo a Bible, as a way of signifying that the “People of the Book have not had a better friend.”