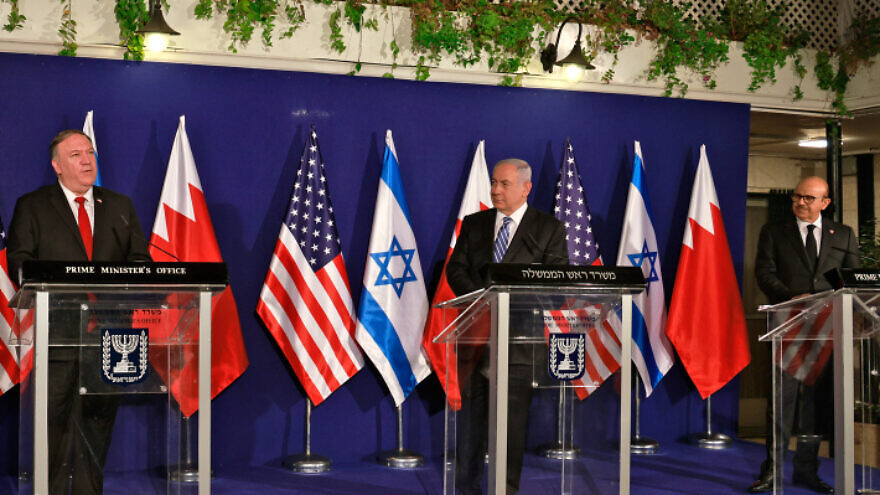 (November 18, 2020 / JNS) U.S. Secretary of State Mike Pompeo declared that the normalization deals between Israel, the United Arab Emirates and Bahrain are a victory for peace and religious freedom in the Middle East.

“These agreements open up wonderful opportunities for commerce and economic development,” he said.

“These agreements also tell malign actors like the Islamic Republic of Iran that their influence in the region is waning, and that they are ever more isolated in this and shall forever be until they change their direction,” he said. “They also advance religious freedom. Muslims will be able to more easily pray at the Al-Aqsa Mosque, thanks to the new flights through Abu Dhabi and Manama.”

He added that the normalization agreements “set down a marker—a marker for the future of the Middle East” with “a common vision for peace, security and prosperity.”

Al-Zayani, who is making his first official trip to Israel, said that he has been “greatly encouraged” by his meetings with officials, and is discussing with Pompeo and Netanyahu “how we can achieve the objective of the Abraham Accords in practical terms.”

He said he hopes for e-visas for his citizens to travel freely between the countries and for up to 14 weekly flights from Bahrain to Tel Aviv, as well as flights to Eilat and Haifa.

“The peace we are pursuing will be a warm peace that will deliver clear benefits to our peoples,” said Al-Zayani.

In his remarks, Netanyahu thanked the Trump administration for helping to establish the accords and greater stability in the region, saying that “peace between Israel and Bahrain is built on foundations of mutual appreciation and great interests.”

“We are unleashing an incredibly potent economic force.  A force for peace for both our peoples,” said the prime minister.

The visit by Pompeo is part of a tour of several countries, including France, the United Arab Emirates, Qatar, Georgia and Saudi Arabia. It will likely be his last tour of the Middle East ahead of the inauguration of President-elect Joe Biden in January.

During his time in Israel, Pompeo will also make a historic visit to the settlement of Psagot and its winery, which is located north of Jerusalem in Samaria. It will mark the first time a secretary of state visits an Israeli settlement.