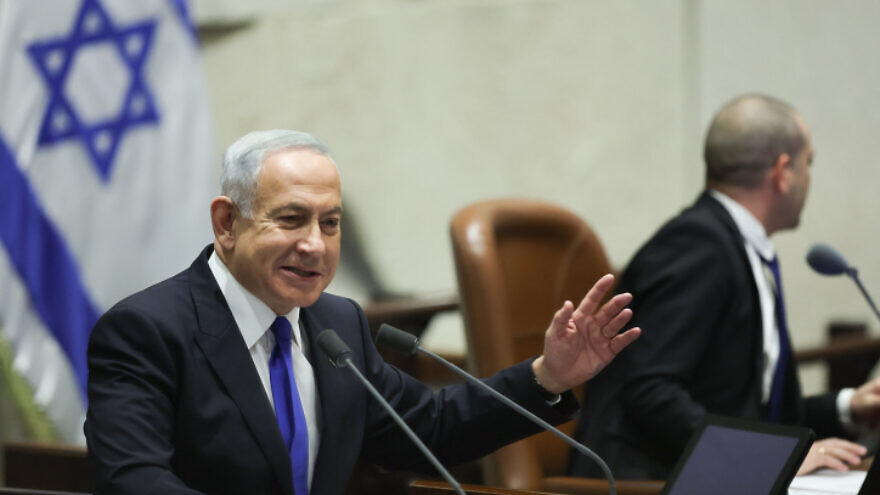 Benjamin Netanyahu speaks at the swearing in ceremony of the 37th Israeli government at the Knesset, Dec. 29, 2022. Photo by Yonatan Sindel/Flash90.
Spread the word.
Help JNS grow!
Share now:

(December 29, 2022 / JNS) Incoming Prime Minister Benjamin Netanyahu took the podium at the Knesset on Thursday to launch his new government, announcing it would focus on three main goals.

First, he said, it would prevent Iran from “developing an arsenal of atomic weapons that will threaten us and the whole world.” Second, it would develop Israel’s infrastructure and deliver “a flourishing economy to every part of Israel.” Third, it would expand “the circle of peace with Arab states with the goal of ending the Arab-Israeli conflict.”

Netanyahu also said that his government would restore personal security to Israel’s citizens and “sovereignty” to the State of Israel, addressing fears that Israeli authority has eroded in areas where there are large minority populations, including the Negev and Galilee.

He said his government would address the rising cost of living and improve the education system “for the good of all Israeli citizens.”

Following Netanyahu, outgoing Prime Minister Yair Lapid took the podium to defend his government’s record. Among its achievements, he said, was persuading, through diplomatic efforts that were largely under the radar, the Biden administration from returning to the Joint Comprehensive Plan of Action (JCPOA), the 2015 nuclear deal.

He also said his government oversaw a period of economic growth and the end of the Covid crisis without resorting to lockdowns.