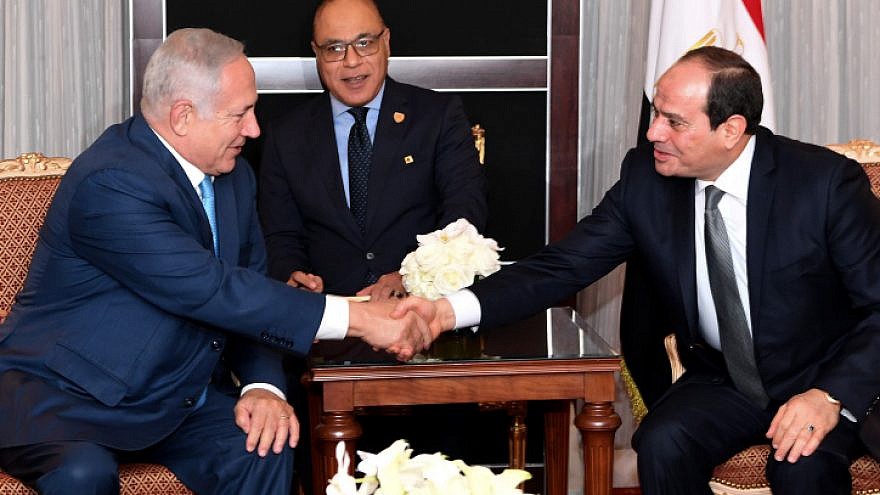 (December 10, 2020 / Israel Hayom) Israeli Prime Minister Benjamin Netanyahu is expected to head to Egypt for a state visit in the coming days, at the request of Egyptian President Abdel-Fattah el-Sisi, officials in Cairo have confirmed to Israel Hayom. The official visit will be the first by an Israeli prime minister to the country in more than 10 years.

Netanyahu is expected to discuss a series of regional issues with the Egyptian leader, chief among them bolstering security and diplomatic ties in light of the Iranian threat and coordinating positions between Jerusalem and Cairo ahead of President-elect Joe Biden’s entry into the White House.

Netanyahu and el-Sisi are also expected to discuss the possibility of renewing talks between Israel and the Palestinians, as well as efforts by mediators in the Egyptian intelligence services to achieve a deal for the Gaza Strip.

The Egyptian officials said the government was concerned that a Biden administration could be hostile to Cairo, and that it would sign onto a new nuclear deal with Iran that would undermine regional stability. The officials further said that Cairo placed great importance on the Abraham Accords, as well as the regional alliance being forged between Israel and other moderate Sunni Arab states and Sudan.

A senior Egyptian Foreign Ministry official told Israel Hayom that should the Egyptian and Israeli leaders meet, the expectation was that Netanyahu would receive an official state welcome.

“If Netanyahu’s planned visit to Egypt does take place, President el-Sisi will greet him at the airport with Egyptian and Israeli flags waving alongside one another,” he said.

According to the officials, the two leaders were set to meet in either Cairo or Sharm el-Sheikh.