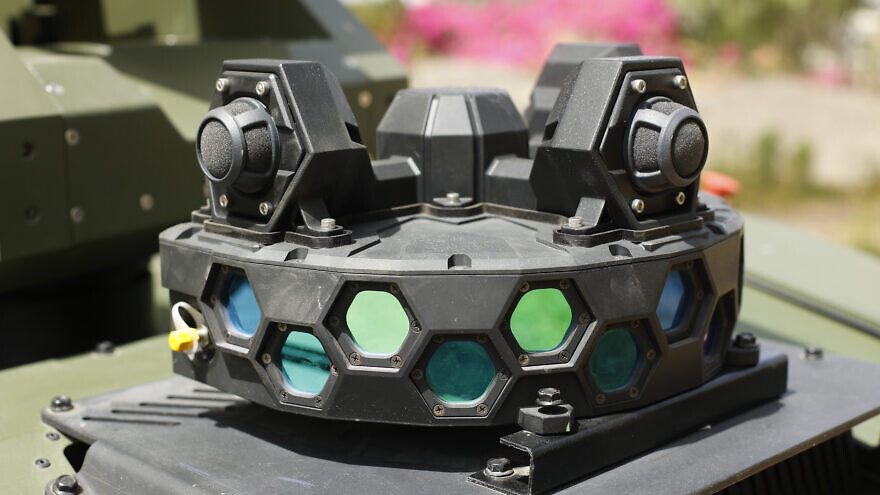 (July 1, 2022 / JNS) A new gunfire-detection system unveiled earlier this month by Israel Aerospace Industries is attracting worldwide attention from potential clients, and company officials say its ability to turn shooters’ locations into precise target data means that “the imagination is the limit” in terms of usage and impact on future battlefields.

The system can detect anything from machine-gun fire, handguns, RPGs, 30-millimeter cannons and other types of threats. The system can detect hostile fire at lengthy ranges, including 2 kilometers for RPG attacks and more than 400 meters for AK-47 fire. Sniper positions can also be detected from hundreds of meters away.

According to the company, the system can be used in both stationary and on-the-move configurations, on vehicles, armored platforms, tanks and autonomous unmanned systems, as well as vehicles that transport VIPs and paramilitary vehicles. A version also exists for infantry and special force units.

Described as lightweight, Othello speeds up the time it takes for forces to locate enemy positions and turn that information into targeting data for return fire in a process known as the sensor-to-shooter loop.

Engineers at IAI’s Innovation Center who previously served in the Israel Defense Forces began developing a new acoustic sensor to identify and class hostile targets, using new kinds of technology, according to IAI.

Eytan Eshel, IAI’s chief technology officer, said “the unique nature of IAI’s Innovation Center is based on accelerator format, operating as a startup, allowing the company’s engineers  a path to develop advanced technologies and reach MVP [minimum viable product] or POC [proof of concept] within 13 weeks.”

Asher Abish, director of marketing at IAI-ELTA’s Land Division, said Othello-P was developed using a combination of innovation and developing existing systems. “One of the biggest problems that we have is getting situational awareness. This comes into our minds as cameras around us, letting us see our surroundings. But it’s actually much, much more than that,” said Abish.

Situation awareness means knowing where friendly and hostile forces are, the location of vehicles and where firing positions inside buildings are—and then turning that information into targeting coordinates that can be placed on a map.

“Othello P is a unique approach, a system that detects the source of fire. If someone is shooting at me, I can identify where the fire coming from, what the location of the shooter is,” he added.

The camera (electro-optical) sensor identifies the flash of hostile fire that emanates from a barrel. The acoustic sensor identifies the blast, as well as shockwaves that are generated by bullets passing nearby. “We can integrate all three—or even just two of these—to get a location,” said Abish.

“If I’m in a protected vehicle and someone is shooting at me, the first thing I want to know is where it’s coming from. If I know the location, I can eliminate the threat. This is critical,” he stated.

This type of situational awareness is sorely lacking on a battlefield, such as Ukraine today, said the officials, where many tanks have been hit by RPGs and personnel struck by sniper fire without the forces knowing where to return fire.

‘Small sensor opens up a big window of opportunity’

Othello-P can operate in day or night and in all-weather conditions, stated IAI representatives. “We are able to operate in an urban area. This is very unique because the current traditional systems have a problem operating in an urban area,” said Abish. “Urban areas are noisy environments. We integrated optical sensors for detecting flashes and an acoustic listening sensor for measuring and classifying fire sources, enabling us to operate in much more robust conditions than in the past.”

The sensor can also be mounted on a tripod for VIP protection, such as on the balcony of a president.

In military settings, the target data that the system generates can be sent up to the level of the headquarters, which can then dispatch support to the unit under fire, such as through artillery return fire, or sending more forces to the relevant sector.

“Knowing lots of fire is coming from certain locations will help the headquarters to even divert transports away from there. This small sensor opens up a big window of opportunity when you look at a battlefield,” argued Abish.

Othello-P is made up of two parts, with each providing 180 degrees of coverage, amounting to 360-degree coverage per system. The two parts are integrated into a single control box.

The system can also detect the sources of fire directed against neighboring friendly sources.

According to Eshel, potential clients from around the world have expressed interest in the technology with demonstration requests lining up, and startup companies could become part of the project as well.