(October 19, 2021 / JNS) It may turn out that a lot of Americans are devoting more thought to the question of who will ultimately succeed the late Alex Trebek as the host of “Jeopardy!” than they do about far weightier issues. When Trebek, who had been the face of the venerable quiz show for 36 years, died last year at the age of 80 it set off a much-ballyhooed search for a successor. The competition was intense and ultimately involved a broad range of celebrities who aspired to the job.

But now, after a series of twists and turns that was the stuff of soap operas, a tentative, if not permanent choice has been made—in the person of actress Mayim Bialik—some people seem to be asking whether it’s kosher for “Jeopardy!” to be led by someone so open about both her Jewish faith and her support for the Jewish state.

America in 2021 is a place where anti-Semitism is quite real. But it’s also a country where Jews have been accepted in just about every sector of culture, industry and government. Indeed, it may be that the only job titles that can be said to be off-limits to Jews are those like, say, Catholic Archbishop of New York, which are reserved for believers of a different faith.

But according to a recent feature in The New York Times, Bialik may be too open about her opinions about “vaccines” (she has said she is a “non-vaccinating family”), a “disputed brain supplement” and “hot-button issues” to fit the supposedly impartial mold long filled by the much-loved Trebek. There may be some controversy about her views on vaccines in the past (though she and her sons, ages 12 and 15, did get the COVID vaccine) and about one of the products that she has endorsed. But the only “hot-button” issue listed by the Times in the article involved her support for Israel and “her devotion to Judaism.”

The conceit of the piece was that since Trebek was perceived as being so “neutral,” Bialik was somehow a bad fit for the position of “Jeopardy!” The implication was not only that she had been too open about her life and beliefs—she has more than 1 million followers for her “Breakdown” podcast on YouTube and a similarly huge following for a video blog “Grok Nation” that she did for many years and wrote for the Kveller.com website—when compared to Trebek. But that the “neutrality” that some seem to think is a requisite for the job was incompatible with her open profession of faith and Jewish identity. And if you didn’t get the message from the article, Bialik’s willingness to be upfront about being a proud Jew was apparent in the pictures accompanying it in which she was shown wearing a Star of David necklace. 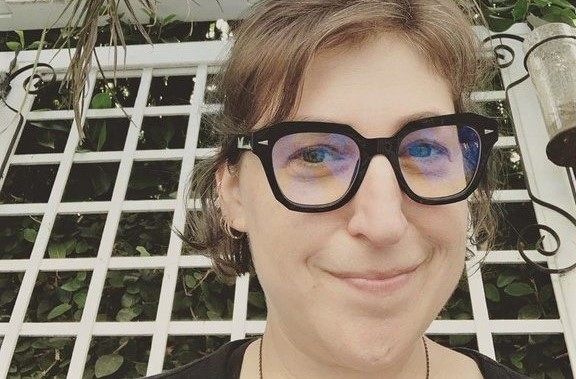 In August, “Jeopardy!” executive producer Mike Richards ended the suspense and chose himself to take on Trebek’s job while tapping Bialik to a subsidiary position as host of the nighttime version of the show as well as specials. But not long after that announcement, Richards was sunk by revelations about sexist and other offensive comments he had made in the past. With Richards out of the running and pushed out of his producer’s job as well, Bialik was left as the last person standing in the competition and, at least for now, is the full-time “Jeopardy!” host. She hopes that will turn into a permanent gig. But those who consider the decision about the identity of the person who will provide clues to the show’s contestants—who must answer in the form of a question—to be akin to electing a pope or confirming a chief justice of the Supreme Court are weighing in on Bialik’s suitability with all the viciousness and snark that you would expect to be part of such a solemn choice.

That means that everything Bialik has ever said or done is being gone through with a fine-tooth comb. According to left-wing CBS late-night comedy-show host Stephen Colbert, the only people who don’t think she’s controversial are those without access to the Internet. A search of her YouTube videos would show that she has expressed an opinion about just about every aspect of her life as a parent (about which she has also written two books), her divorce, open relationships, sexual harassment, holistic medicine, food (she is vegan) and her experiences as a sitcom actress. So there’s plenty of ammunition for critics.

Although the charming and knowledgeable Trebek often sounded as if he knew the answers to many of the questions on the show even without being told, he was just a radio and television announcer who went on to success as a popular game-show host. Bialik was a successful child actress. She took a long break from the arts to go to college and ultimately wound up with a Ph.D. in neuroscience from UCLA before eventually returning to acting as a better way to support and spend more time with her children, as opposed to a position as a research scientist. That, along with her own brand of charm and comic timing, as well as long experience in the rigors of work in television, made her a solid candidate for the coveted position.

Yet as the Times article—and the many comments appended to it from readers who highlight their anger about someone who is not supportive of “Palestine”—makes clear, her connection with Judaism seems to stick in a lot of people’s throats.

Her past views on vaccines are certainly controversial, but since she’s not a COVID holdout that would not seem to be much of an obstacle. As for the brain supplement, she asserts that she just said it was beneficial rather than making claims that it cures anyone of anything. And considering that Trebek made a fortune shilling for an insurance company, a motel chain and a brand of crackers, the notion that the host of “Jeopardy!” should not be tainted by commercialism is a bit rich.

So other than those who object to her looks or her gender—or who are just fans of one of the other candidates—the only really substantive objection to Bialik is her public embrace of both Judaism and Israel. Indeed, the fact that she raised funds to buy bullet-proof vests for Israel Defense Force soldiers during the 2014 Gaza war as terrorist rockets rained down on Israeli villages, towns and cities is considered a problem for Times readers.

It’s not clear in what context being a “staunch Zionist” and a Jew who takes her faith seriously (though raised in the Reform movement, she now identifies as Modern Orthodox) would disqualify someone for any job. That the Times highlights this as a reasonable objection to being a game-show host would be puzzling if not for the newspaper’s long history of biased coverage of Israel and Jewish issues.

The security of the Jewish community won’t rest on Bialik’s prospects for becoming the permanent host of “Jeopardy!” But the mere fact that her open Jewish identity is considered problematic speaks volumes about what passes for reasonable reporting and discourse at the newspaper that still poses as America’s paper of record should trouble everyone.