(March 31, 2021 / Jerusalem Institute of Strategy and Security) In an early and significant policy reset, the administration of President Joe Biden decided to end U.S. support for the Saudi-led coalition in Yemen on Feb. 5. The coalition is engaged in a war against the Iran-supported Ansar Allah organization, commonly known as the “Houthis”—the name of the clan which established and controls this organization.  Support for the Saudi-led coalition had been maintained by the previous two U.S. administrations. The announcement followed a decision to temporarily cease arms sales to Saudi Arabia and the United Arab Emirates, and to remove Ansar Allah from the U.S. list of designated terror organizations. The U.S. statement specifically withdrew support for further offensive operations by the Saudi-led coalition.

The Saudi-led coalition is allied with the internationally recognized Yemeni government of Prime Minister Abd Rabbo Mansour al-Hadi. The intervention began in March 2015, following the launching by Ansar Allah of a ground campaign in late 2014 intended to result in the destruction of the government and the establishment of an Iran-aligned regime in Yemen. The Houthis completed their capture of the capital, Sana’a, on Jan. 23, 2015. Prime Minister Hadi fled to Aden, in the south of the country.

By March 2015, Houthi-aligned forces, in cooperation with elements supportive of former dictator President Ali Abdullah Saleh, were closing in on Aden. “Operation Decisive Storm,” the Saudi-led intervention, was launched at the request of Hadi’s government to prevent the capture by the Houthis of all of Yemen. The intervention, and in particular the use of airpower, successfully halted the advance of the Houthis and their allies in summer 2015. Saudi Arabia deployed around 100 planes and up to 150,000 troops in Yemen, according to Al-Arabiya. The United Arab Emirates, too, committed ground forces and air power. Egypt, Morocco, Jordan, Kuwait and Bahrain were also members of the coalition, although the half-hearted Egyptian contribution gave rise to Saudi complaints. The Saudi-led effort received the support of the United States, the United Kingdom and France.

By the end of 2015, in a pattern familiar in the post-2010 Arab world, the battle lines had largely stabilized, and Yemen was divided into de facto areas of control. The Houthis remained in control of the capital, and of a large swath of the north and center of the country. Forces aligned with the government were controlling the sparsely populated east. A combination of government forces and troops loyal to the separatist Southern Transitional Council controlled the southwestern tip of Yemen, and the western coastline up to the port of Hudaydah. In the south, there were also pockets under radical Sunni Islamist (AQAP) control.

Regarding the decision’s immediate effect, it appears to have helped trigger an offensive by the Houthis on the oil town of Marib, the last major city in central Yemen not already under the control of the organization. A sharply increased tempo of attacks by the organization using missiles and drones against targets in Saudi Arabia has also taken place over the last weeks, including an attack on March 7 on the oil storage yard at Ras Tanura, site of the world’s largest offshore oil-loading facility. A refinery is also located in this area. A missile was launched on the same day at a residential compound maintained by the Saudi state oil company Aramco in the area of Dhahran. Taking responsibility for the attacks, the Houthis also claimed to have launched attacks on military targets in the Saudi cities of Dammam, Asir and Jizan. The Saudi civil aviation airport of Abha also came under regular attack.

This immediate emboldening of the Houthis is the first fallout of the U.S. decision, but the decision’s significance goes deeper. Yemen is a space of clear strategic significance if one begins from the assumption that Iran and its allies constitute the key danger to regional order, and that therefore preventing their expansion must be a core interest for all those committed to the preservation of that order.  The U.S. decision to withdraw support for the forces holding the line against the Teheran-supported Houthis suggests that the Biden administration is operating from a different set of assumptions or preferences.

At the southern tip of Yemen is the Bab el Mandeb (Gate of Tears) Strait, a narrow passage of water between the Indian Ocean, the Gulf of Aden and the Red Sea. This waterway, overlooked by the port city of Dhubab, is a vital artery for the global economy.  Fully 9 percent of all seaborne-traded crude oil and refined petroleum products pass through it. Acquisition by the Iranians, via their Houthi proxy, of control of the land adjoining this strait would give Teheran an additional and very significant point of pressure on the passage of these products, and therefore on the global economy. At a stroke, Iran would be able to paralyze or severely disrupt the transit of materials vital to the function of Western countries. The Saudi and Emirati intervention of 2015 was intended to prevent this eventuality. The Houthi advance southwards was indeed halted, and in 2017, Saudi-supported forces reconquered the city of Dhubab, ending the Houthi threat to the Strait. 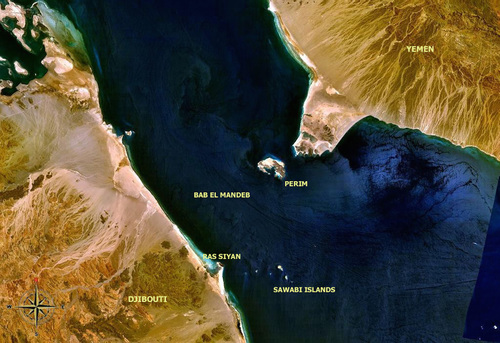 Forty percent of the world’s oil ships pass through the Bab-el-Mandeb strait (pictured) in the southern part of the Red Sea, giving some idea of the global impact the conflict in Yemen could have. Credit: NASA.

The intervention is routinely described in Western media as a failure and a brutal act whose main result has been stalemate and humanitarian disaster (and the loss of 233,000 lives).  The humanitarian situation in Yemen is indeed appalling. But it should be borne in mind that by halting the advance of the Houthis north of Aden, the Saudi-led “Operation Decisive Storm” prevented the acquisition by the Iran-led regional bloc of domination of a strategic waterway in the region. It is also customary to apportion at least equal responsibility for a humanitarian disaster to the instigator of the aggression that precipitated it. In the case of the current situation in Yemen, the instigator of the conflict is the pro-Iranian side. Absolving the Houthis of responsibility for this situation would be analogous to absolving the Assad regime of responsibility for the humanitarian crisis in Syria. It is not clear why this attribution of sole or primary responsibility has become routine in most Western media coverage of the situation in Yemen.

But the strategic significance of the Saudi-led intervention is not confined only to the issue of oil products and their transit through the Bab el Mandeb Strait. This route is also Israel and Egypt’s gateway to the east and to the economies of Asia, which are set to emerge as the center of global strategic and economic gravity in the period ahead. Both Cairo and Jerusalem have the ambition of exporting liquefied natural gas to the Asian market. Asian countries, including India, Japan, China and South Korea constitute 70 percent of the global liquefied-gas market. For this ambition to remain feasible, there needs to be a stable and secure route to the east. Iranian control of a strategic point along the waterway would end or severely complicate this possibility.

Similarly, the route via the Red Sea to the Indian Ocean is vital to the U.S. Fifth Fleet, which is the main guarantor of security in the Gulf region, protecting vital shipping lanes on the route from the Suez Canal to the Horn of Africa.

Finally, the domination of Yemen would form a significant element in the Iranian strategy of surrounding Saudi Arabia. The current reality allows for near daily harassment and launching of rockets, drones and missiles from Yemen at targets in Saudi Arabia. The loss of Yemen in its entirety would exacerbate this situation.

Full control of Bab el-Mandeb could also facilitate Iranian interventions in the Horn of Africa and East Africa. The Islamists there, who are highly active in Somalia and increasingly elsewhere in East Africa, are partly supported by Iran. This could also have an impact on Sudan’s willingness to move forward towards normalization with Israel.

What is the reason for the U.S. decision on Yemen?

The arguments for maintaining Western support for the Saudi effort in Yemen, as summarized above, make good sense if events in the Middle East are seen through the prism of a Cold War-type system, in which a U.S.-backed security architecture is being challenged by an Iranian attempt at hegemony.  From this point of view, it is difficult to see how the U.S. decision serves American and Western interests. This leads to the conclusion that the current administration, in contrast to its predecessor, does not view events through such a prism.

One of President Biden’s campaign promises was a return to a nuclear deal with Iran. At present, the negotiation of a return to the JCPOA is on hold, with the Iranians demanding the lifting of Trump-era sanctions as a precondition for entering negotiations, and the administration rejecting this condition (but perhaps open to some “orchestration” of steps leading to negotiations).

Nevertheless, evidence has emerged of U.S. efforts to signal goodwill to Teheran in the prelude to negotiations by a variety of means. Among these, for example, are reports concerning U.S. willingness to allow South Korea to supply Iran with $1 billion in payment for oil supplies. The series of measures against Saudi Arabia, of which the decision to withdraw support in Yemen is among the most consequential, may well form part of an effort by Washington to signal a change of direction to Teheran—away from staunch backing of Western allies in the regional contest with Iran, and towards an attempt at balancing between rival regional powers, along the lines attempted by the Obama administration.

This attempt at balancing—if indeed this is where U.S. policy is tending—would form part of a broader policy of partial disengagement from the Middle East. Unfortunately, in the short term, its effect will be to strengthen declared enemies of the West, while creating unnecessary difficulties for Western allies. Events in Yemen currently form the possible template for this process.

Dr. Jonathan Spyer is the author of “Days of the Fall: A Reporter’s Journey in the Syria and Iraq Wars,” and “The Transforming Fire: the Rise of the Israel-Islamist Conflict.” He is a regular contributor to “Jane’s Intelligence Review,” has published in leading journals and media outlets, including “Middle East Quarterly,” “The Times (of London),” “Foreign Policy,” “The Wall Street Journal” and “The Guardian. He is also a fellow at the Middle East Forum.