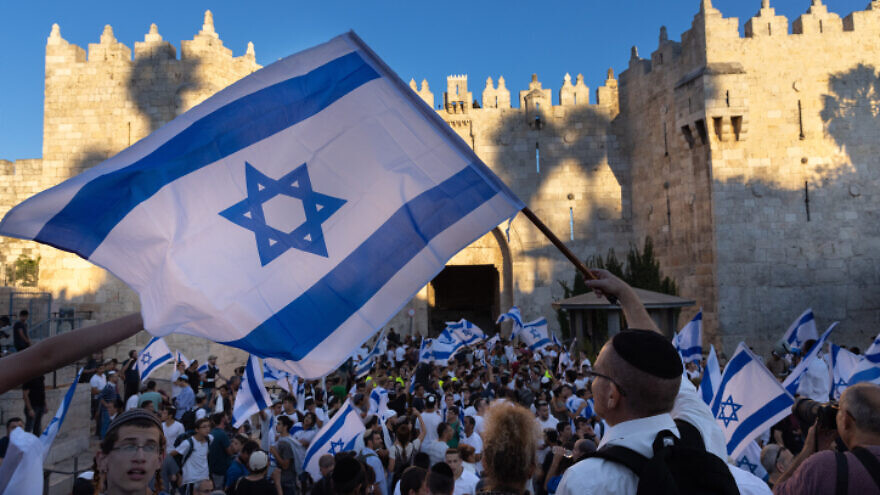 (May 26, 2022 / Israel Hayom) Israel’s police commissioner on Wednesday ordered the highest level of alert ahead of the Jerusalem Day flag march, which is scheduled for Sunday.

Approximately 3,000 police officers will be on duty to secure the march, and thousands more will be dispatched across the country and in mixed Jewish-Arab cities. In addition, Border Police reserve battalions will also be put on alert.

The last time such reinforcements were activated was in May 2021 during the “Operation Guardian of the Walls,” the 11-day conflict against Hamas and Palestinian Islamic Jihad in the Gaza Strip, during which 4,000-plus rockets were fired towards Israeli population centers.

According to a source in the Israel Police, battalions operating in Judea and Samaria will replace those active in the Jerusalem periphery, which will in turn operate inside the city and its outskirts to respond to any security situation that arises.

Police are focusing their efforts on Jerusalem, including the seam zone east of the Green Line and west of the Jerusalem-adjacent security fence, to contend with the phenomenon of undocumented Palestinians entering Israel illegally.

In an effort to stop disturbances before they happen, police have arrested dozens of people suspected of incitement and planning to stop the march. Officers have also issued warnings to individuals they believe could potentially disturb public order.

“We are prepared for any scenario,” a police official told Israel Hayom. “The idea is to create minimum friction. We are prepared on the Temple Mount, and we do not expect disturbances on the mount.”

Although Hamas has threatened dire consequences should the march pass through the Damascus Gate, the official noted that in 2021, the terrorist organization had fired rockets at Jerusalem despite marchers avoiding the site.

“It is important we keep the march in its current format and don’t get to a point where if they threaten us, we don’t hold it,” said the official.

With regard to the death threats against Otzma Yehudit Knesset Member Itamar Ben-Gvir, who plans to attend the march, the official said police would assess on Sunday whether his attendance poses a potential threat to the public or himself.

The official emphasized that any attempt to disturb the peace, whether by Arabs or Jews, would be dealt with harshly by police.

Police dismissed as false social reports alleging marchers would ascend the Temple Mount during the march.

While the march is underway, police will act to regulate pedestrian and vehicular traffic in the area, in particular, adjacent to the Old City. Muslim worshippers will be able to enter the Temple Mount through the northern gates in an effort to separate them from the marchers.