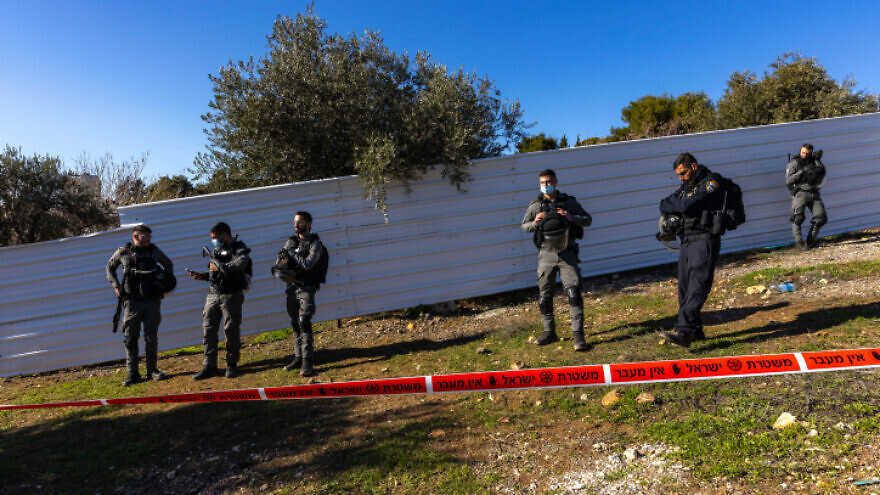 (January 19, 2022 / JNS) The Israel Police on Wednesday evicted the residents of several illegal structures in Jerusalem’s flashpoint Sheikh Jarrah neighborhood, arresting more than a dozen people during the evacuation and subsequent demolition of the buildings.

Police had attempted to carry out the court-ordered eviction several times this week, resulting in a tense standoff with members of the Salhia family, one of whom threatened to self-immolate if the evictions were carried out.

“The evacuation of the area has been approved by all the courts, including the Jerusalem District Court,” the Jerusalem Municipality said in a statement on Wednesday.

The initial evacuation order had been issued in 2017, and the residents of the illegal structures “were given countless opportunities to hand over the land with consent,” said the Municipality.

“Unfortunately they refused to do so, even after meetings and repeated dialog attempts by the Jerusalem municipality,” the statement continued.

The city added that “the family’s illegal takeover of public space prevented hundreds of children with special needs from eastern Jerusalem from receiving an educational service that the municipality seeks to provide.”

Earlier in the week, police demolished the family’s plant nursery and two storage structures on the property.

The plan for the property, shared by the municipality on its website, includes 18 classrooms and six kindergartens, sports fields and leisure facilities. The city said that the central location of the campus will facilitate the arrival of students from all the Arab neighborhoods in the area and will allow full accessibility and maximum convenience for parents and students.

“Despite the fact that the plan was approved and budgeted years ago, its implementation is severely delayed due to the takeover of the land by foreign parties,” the municipality stressed. “The family who invaded the land has built a private commercial business on it and a temporary residential building. Contrary to the family’s claim, the buildings they have erected were built illegally in recent years only.”

The city also stressed that claims that the area will be expropriated for the purpose of transferring it to Jewish residents are “false and unfounded.”