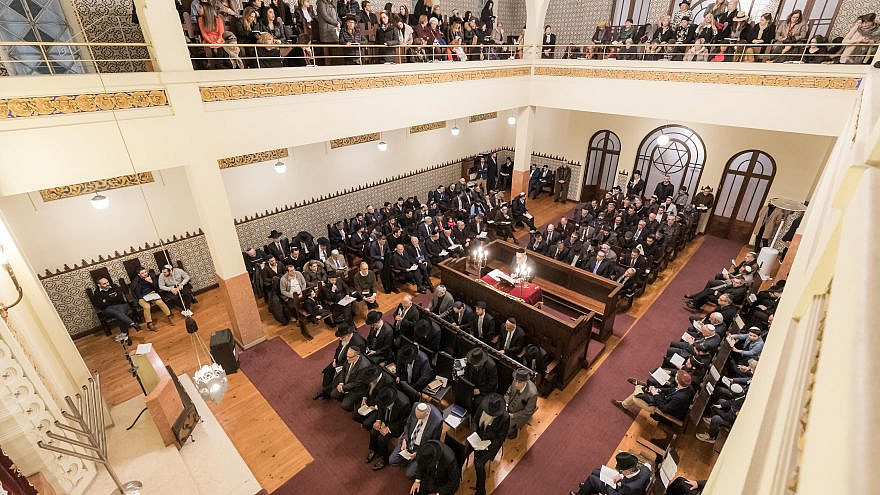 Portugal is home to between 5,000 and 6,000 Jews with the majority in Lisbon and Porto, whose communities have around 500 formal members each. Credit: Jewish Community of Porto.
Republish this article
756 WORDS
Spread the word.
Help JNS grow!
Share now:

(June 30, 2022 / JNS) The Jewish community of Oporto, Portugal’s second-largest city, says it has been the victim of an anti-Semitic campaign orchestrated by “agents of the state” seeking to abolish the Nationality Law for Portuguese Sephardic Jews. Also known as the “Sephardic Law,” the 2015 legislation grants Portuguese citizenship to descendants of Jews expelled from the country in the 15th century.

Writing to the Portuguese Parliament’s Committee on Constitutional Affairs, Rights, Freedoms and Guarantees on June 22, community president Gabriel Senderowicz detailed the abuse he said the community had endured. State actors, Senderowicz wrote, had “gathered together anonymous denunciations from the scum of society … and created an atmosphere of terror and hostile news through the agency of half a dozen handpicked journalists.”

The alleged campaign bore bitter fruit, as the government has announced revisions to the Sephardic Law that members of Portugal’s Jewish community say create demands that are impossible to fulfill.

“No Sephardi [Jew] in the world has made hundreds of trips to Portugal since childhood, let alone owns properties inherited from ancestors who lived in the country at the time of the Inquisition,” Senderowicz told JNS.

The new requirements will go into effect starting Sept. 1, 2022.

In 2015, the Oporto Jewish community’s involvement with the Sephardic Law began on a high note as Portugal’s government asked for help in vetting potential candidates. The law required certification from the Portuguese Jewish community “proving Sephardic Jewish lineage of Portuguese origin.”

Then, in early 2020, opponents of the law targeted the community, said Senderowicz.

“They were a group of anti-Semitic politicians, journalists and influencers,” he told JNS. “They launched a slanderous campaign against the law, saying ‘candidates only want passports of convenience,’ ‘there are tens of millions of candidates’ [57,000 have in fact received citizenship] and ‘applicants need only pay thousands of euros to genealogists, lawyers and the Portuguese Jewish communities.’ ”

Police opened a criminal investigation into the matter in February 2022.

Senderowicz described how the Portuguese authorities “invaded” Oporto’s Kadoorie Mekor Haim Synagogue, the largest synagogue in the Iberian Peninsula “as if it were a brothel,” searched the home of the synagogue’s vice president, Isabel Ferreira Lopes, “looking for bags stuffed with cash,” and arrested and detained the community’s chief rabbi, Daniel Litvak, on suspicion of fraud.

Among the specific accusations was the rabbi’s certification of Russian billionaire Roman Abramovich. Senderowicz told JNS this was a falsehood; that Abramovich had been certified by the Russian rabbinate, which confirmed the family memory of the applicant and last names of Sephardic origin in his genealogy, both of which are criteria under the law.

Abramovich, who along with other Russian oligarchs, has become persona non grata in western countries in the wake of Russia’s invasion of Ukraine, has been held up by opponents of the Sephardic Law as a poster child for why it should be repealed or revised, said Senderowicz.

Although Rabbi Litvak was released after 24 hours and was not prevented from continuing to issue certificates, Senderowicz wrote the Portuguese parliament committee that “the Board of Directors of the Jewish Community of Oporto decided to suspend this activity, as it refuses to cooperate with a state that with the aim of destroying a law, has started an anti-Semitic and terrorist action against an organized Jewish community.”

Also in protest, the Jewish community inaugurated a new hall at the Jewish Museum of Oporto that chronicles anti-Semitism in Portugal from 2015 to 2022. Senderowicz said that as part of the exhibit, the community plans to expose the state actors who were involved in maligning it.

Senderowicz noted that anti-Semitism has been on the rise in Portugal, but that the authorities have yet to take it seriously.

The Israeli Embassy in Portugal, in a statement of support, said, it “appreciates the important activities of Portugal’s Jewish community—including all communities and institutions—and will continue to support and work shoulder to shoulder with it to ensure its growth and prosperity, as Israel does with all Jewish communities around the world. The embassy is maintaining constant contact with the Jewish community in Porto.”