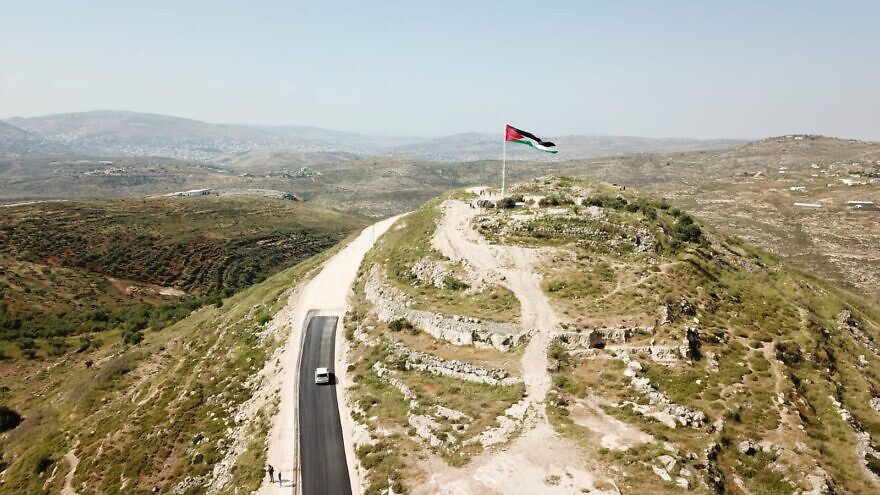 (May 11, 2020 / JNS) The Palestinian Authority, taking advantage of the absence of Civil Administration inspectors during the coronavirus shutdown, is consolidating its takeover of “Tel Aroma,” a Hasmonean fortress in Samaria, according to Israeli NGO Regavim.

The NGO, which according to its website aims to “ensure responsible, legal, accountable and environmentally friendly use of Israel’s national lands and the return of the rule of law to all areas and aspects of the land and its preservation,” reported that on Sunday a fleet of heavy engineering tools from the P.A. and the Beta Village Council arrived at Tel Aroma and paved a road leading toward the remains of the fortress.

Situated on a commanding ridge controlling the passage between the Jordan Valley and the heart of Samaria, the Tel Aroma Fortress is the northernmost of eight fortresses established by the Hasmonean Kingdom to protect Israel’s eastern border.

In recent months, the P.A. has been making concerted efforts and investing considerable resources to take over the site, installing generators and perimeter lighting, erecting tents alongside a huge flagpost platform, and manning them around the clock. Senior P.A. and Beta Municipality officials recently held a ceremony at which the fortress was declared a “Palestinian Heritage Site,” a claim that purportedly affords them the “right” to carry out the work, that according to Regavim has caused the destruction of the fortress wall and reservoirs.

This is the culmination of a year-long process of ongoing destruction, according to members of “Preserving the Eternal,” a non-profit  project of the Regavim Movement that works in cooperation with the Shomron Regional Council’s Infrastructure Department to preserve historic and archaeological sites in Judea and Samaria.

Samaria Regional Council head Yossi Dagan assessed the destruction of the site, saying: “Enforcement authorities must give this matter the attention it deserves; they have a responsibility to live up to, this is their job and we expect them to do it. This systematic destruction of Jewish heritage sites throughout Judea and Samaria cannot continue. We demand that they put an immediate stop to the ongoing destruction of Tel Aroma; we call upon the relevant authorities to take action without delay.”

Eitan Melet, field coordinator for the Preserving the Eternal Project, who documented the recent roadwork and destruction at the site, called on Israeli Defense Minister Naftali Bennett to intervene immediately: “Minister of Defense Bennett, you have left a significant imprint on the Ministry of Defense in a short period of time. Now is the time to establish the legacy of your tenure—a legacy that will prove that the State of Israel protects its eternal birthright in the Land of Israel.”