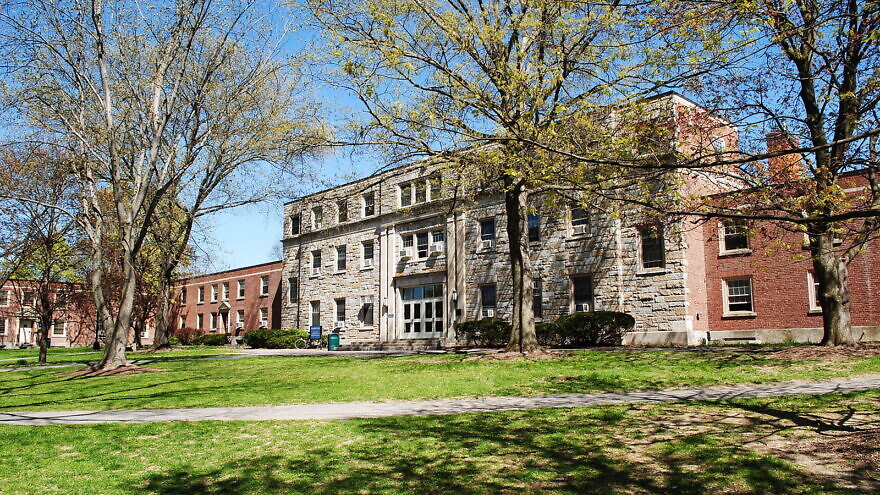 (August 19, 2022 / JNS) Two Jewish students at the State University of New York (SUNY) at New Paltz in Upstate New York brought a formal complaint against the university this week, alleging that the university failed to prevent discrimination against their Jewish identity as members of a sexual assault survivors’ group and failed to guarantee their security when attending classes.

The controversy surrounds a student organization called New Paltz Accountability (NPA) which was co-founded by one of the victims, Cassandra Blotner, as an organization to combat sexual assault.

According to a news release from the Louis D. Brandeis Center for Human Rights Under Law, which is representing the students, Blotner made a post on social media in December expressing her identity as a Jew.

“Jews are an ethnic group who come from Israel,” she wrote. “This is proven by genealogical, historical and archeological evidence. Israel is not a ‘colonial’ state and Israelis aren’t ‘settlers.’ You cannot colonize the land your ancestors are from.”

Blotner’s post was denounced by members of the NPA, saying that it concerned the organization as a whole and that Blotner needed to explain her statements.

At first, Blotner declined, as no other members were ever asked to justify their identities, but after speaking to some Jewish leaders on campus, she offered to discuss her post and suggested including representatives from the Jewish Student Union.

The NPA refused the offer and told her that Zionists were not welcome in the organization.

“While I didn’t initially think I should be forced to defend my personal beliefs, I realized the opportunity here to educate NPA that as Jews we share a history, theology and culture—we’re both a faith and an ethnicity—and it’s all deeply tied to the land of Israel,” Blotner said in a statement. “Expressing support for the Jewish homeland is core to my Jewish identity, the two are inseparable, and I shouldn’t have to shed that piece of my Judaism in order to advocate for survivors of sexual assault. To then get canceled, stalked and harassed, well I can’t even put into words what a horrific and frightening experience this all turned into for me.”

Another member of the group, Ofek Preis, who is Israeli, re-posted Blotner’s post on her personal Instagram account and claims the NPA stopped contacting her about the organization’s activities, and blocked her access to shared organizational documents.

The NPA also continued to make social media posts against Jewish Zionist and Israeli sexual assault survivors at the university, equating Zionism with racism and white supremacy. The posts fueled further harassment of Blotner, with some posts calling her a “dumb b*tch” who supports “mass genocide.”

Both students told university officials that the harassment made them feel unsafe on campus. The officials also declined Blotner’s request to have security accompany her to class, instead advising her not to attend, according to the release.

“We were left with nowhere to go, feeling isolated from those who claim to be fighting for us, for our right to an uninterrupted education. The accusations made against me on account of my national origin denied everything I inherently am as a person: a fighter for justice, an anti-racist, a combater of oppression, and most relevantly, a survivor,” Preis said. “I should not have been asked to choose between being Israeli or being a survivor. I should not have been asked to align with only survivorship or only Zionism. It is possible and necessary to include intersectional identities in spaces that fight for survivors.”

Despite acknowledging in a statement that NPA’s actions were discriminatory, exclusionary and anti-Semitic, SUNY New Paltz President Donald Christian said that the school had a limited ability to intervene because the NPA was not a recognized student organization and no further action was taken.

The NPA was allowed to continue operating on campus and use SUNY resources, according to the release.

Blotner and Preis’s complaint against the university was made with the U.S. Department of Education’s Office of Civil Rights, alleging a violation of their rights under Title VI of the Civil Rights Act of 1964, which prevents discrimination on the basis of race, color, and national origin, including discrimination against Jews.

The complaint claims that the school violated Title VI by allowing Blotner and Preis to be targeted and excluded for their Jewish ethnicity and identity.

Failure to address the discrimination on campus will likely affect other Jewish, Israeli or Zionist students on campus, said Blotner.

Julia Jassey, CEO of Jewish on Campus, said that this type of harassment at colleges against Jewish students is not unique, but the case also shows the xenophobia that Israeli students also face on American campuses, with Preis being explicitly harassed for being Israeli.

“Jewish students, like all students, deserve a college experience free from discrimination and abuse. In this case, acceptance into a community designed to protect survivors was conditional. These students were subject to a litmus test which forced them to decide: forfeit your commitment to an integral social cause, or forfeit your identity,” Jassey said in the release.

The Brandeis Center said that Blotner and Preis have been victimized three times. First by sexual predators, later by the anti-Zionist members of the group established to support them, and finally, by the university’s failure to hold those members accountable and creating a hostile environment for Jewish sexual assault survivors on campus.

The Brandeis Center’s director of legal activities Denise Katz-Prober said that being excluded from social justice groups and activities on campus for expressing ethnic or national identity is a form of unlawful discrimination, but the complaint is not about what was said to Blotner and Preis.

“Rather, it is about the awful things that were done to them. Title VI of the Civil Rights Act requires universities like SUNY New Paltz to ensure that Jewish and Israeli students are not denied educational opportunities due to discriminatory behavior that targets them on the basis of their ethnic and national identities,” Katz-Prober said in the release. “That’s exactly what was done here when these women were thrown out of their student organization because, as Jews, they feel a strong sense of connection to the Jewish homeland. Unfortunately, universities are misdiagnosing the problem and, as a result, failing to protect their Jewish students, like Ms. Blotner and Ms. Preis, from unlawful discrimination.”