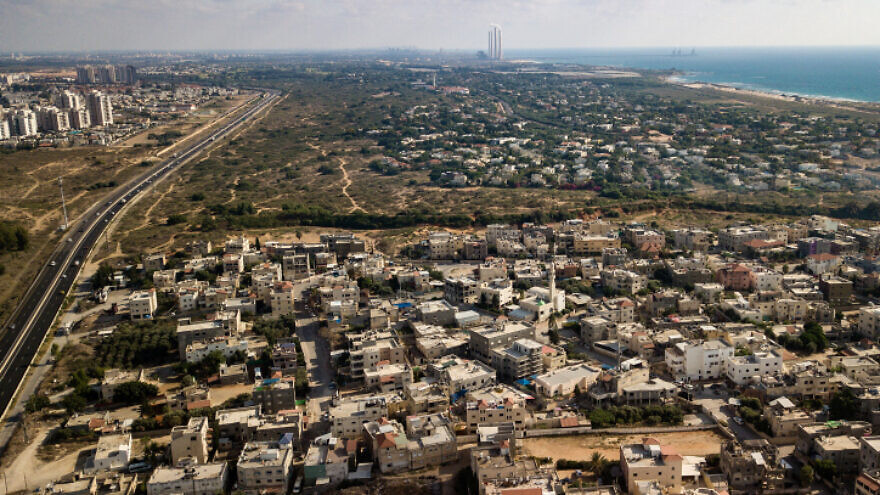 An aerial view of the Israeli Arab town of Jisr az-Zarqa, near Or Akiva and Hadera, July 31, 2018. Photo by Matanya Tausig/Flash90.
Spread the word.
Help JNS grow!
Share now:

(May 16, 2022 / Israel Hayom) The acting director-general of the Israeli Prime Minister’s Office will promote the allocation of millions of shekels in additional funding for the Jisr az-Zarqa Regional Council within the framework of negotiations to keep the Islamist Ra’am Party in the coalition.

In November, the government approved a five-year plan to close gaps between Arab and Jewish society that included the development of Jisr az-Zarqa, which lies on the coast just north of Caesarea. However, the government has further approved a specific plan for the town, to be promoted by Israel’s Ministry of Social Equality.

A rough draft of the plan for the town, seen by Israel Hayom, includes the allocation of funds approved by the government as part of an economic plan for the Arab sector, but also tens of millions more shekels demanded by Ra’am in talks with Schultz in return for remaining in the coalition.

According to one clause, the Welfare Ministry will allocate 16.5 million shekels (around $5 million) to the town in addition to the money promised in the five-year plan. In addition, the Transportation Ministry will allocate funds for the paving of a bypass road that includes the creation of an interchange at the entrance to the community described in the draft as “diverting Highway 2 eastward.”

“The decision had already been made to promote a targeted solution for the Jisr az-Zarqa community in Resolution 550, within the framework of which it was decided to allocate a total of 40 million shekels to the community’s needs alongside other provisions the community was eligible to receive,” said a source close to Foreign Minister Yair Lapid.

Jisr az-Zarqa, said the source, is “a very weak community that suffers from major gaps in education, welfare, and infrastructure. This is the only Arab community situated on the coastal strip, and we intend to help it realize its potential. Within the framework of the agreements with Ra’am, it was decided that Schultz and various government ministries, chief among them the Social Equality Ministry, would help promote the decision so that it receives government approval in the coming months.”