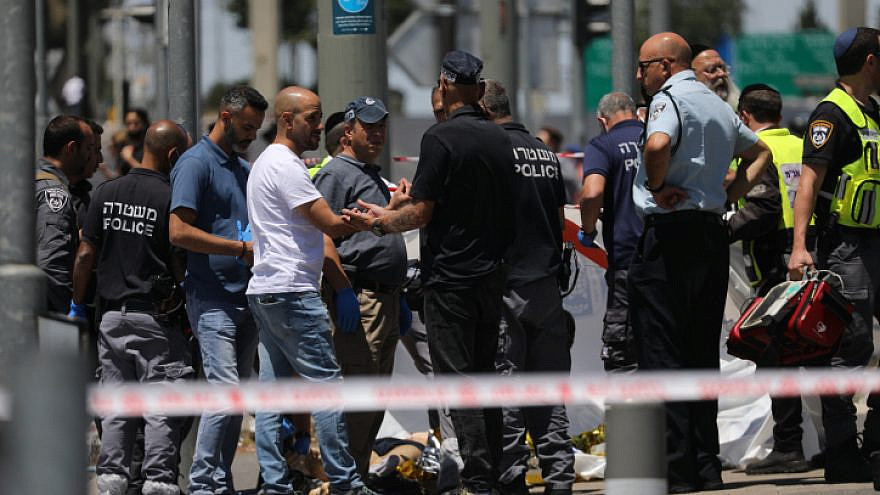 Israeli Police at the scene of a stabbing attack near Ammunition Hill in Jerusalem, where two young men were injured and the assailant was neutralized by officers on the scene, May 24, 2021. Photo by Yonatan Sindel/Flash90.
Spread the word.
Help JNS grow!
Share now:

(May 24, 2021 / JNS) At least two people were wounded on Monday, one severely, in a suspected terrorist attack in Jerusalem, according to the Israel Police.

The assailant, who had attacked passersby near the Ammunition Hill light-rail station with a knife, was shot and neutralized by officers on the scene, and taken away, said police.

“When we arrived at the scene, we saw two victims, conscious, with stab wounds to their upper bodies,” said Magen David Adom paramedic Sigalit Mizrachi.

Both males in their 20s, they were treated on the scene before being evacuated to the hospital, according to MDA. One was in moderate condition, while the other’s condition was listed as “severe.”

There was no information immediately available regarding the suspect’s condition.

The Ammunition Hill station is adjacent to Jerusalem’s Sheikh Jarrah neighborhood, the focus of violent disturbances in recent days over a pending court ruling regarding the eviction of several Arab families from Jewish-owned properties. It was not clear whether Monday’s attack bore any connection to those events.