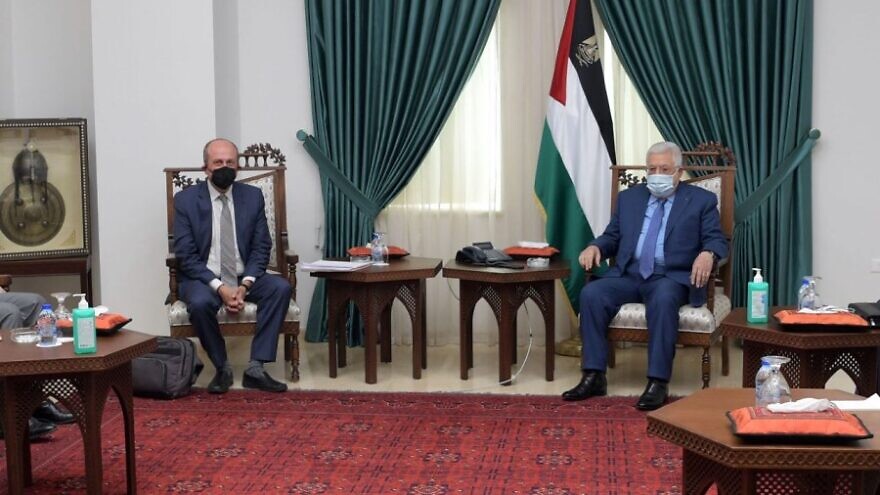 (November 30, 2022 / JNS) The Biden administration is committed to the two-state solution and there is still a possibility of reopening the shuttered Jerusalem consulate to the Palestinians, Hady Amr, who was recently appointed the State Department’s special representative for Palestinian affairs, said on Wednesday.

“It’s a real honor to serve as the U.S. government’s first [special] representative to the Palestinian people and leadership. The creation of this role is unprecedented and elevates Palestinian issues and our engagement on it,” Amr, previously the deputy assistant secretary of State for Israeli and Palestinian affairs, told reporters.

The issue of the U.S. consulate, shuttered under the administration of President Donald Trump, isn’t going away, according to Amr, even though analysts have noted repeatedly there is no viable path forward to its re-opening without Israeli government approval—something denied even under the current Lapid unity government.

He brushed off recent comments made by Palestinian Authority President Mahmoud Abbas critical of the U.S. and supportive of Russia, saying the Americans made their position known to Abbas but were taking a forward-looking posture.

“On that incident, the Palestinian leadership very, very clearly knows our views on it. I am focused on the future, however, and building the U.S.-Palestinian bilateral relationship, lifting up Palestinian lives to make them more equal with Israeli lives,” said Amr, later adding that he intended to engage with the P.A. on “reforms that we believe are important to make Palestinian society more vibrant and more free.”

However, Amr declared that national elections, canceled multiple times by Abbas, are “a decision for the Palestinian people and leadership to decide. We were very pleased to see the local elections that were held earlier this year.” Abbas’s presidential term expired 13 years ago.

Amr implied to JNS that reports that Palestinian Authority leadership, bitter with a lack of follow-through on pledges by the White House, had no bearing on the timing of his appointment, which was said to be delayed by Palestinian recalcitrance.

“I’m not going to get into that beyond saying that we’re working on our own timeline to advance U.S. national interests and priorities, and this seems like the right time for us to advance things,” he said. “I know that sometimes the press gets a hold of stories and creates things, but this is the timeline that we wanted to use to roll this out.”

As far as dealing with the presumptive incoming Israeli government, Amr said he wouldn’t “speculate on its composition and how it’s going to engage” but noted that it is up to Israel and the Palestinian Authority to de-escalate the deadly violence rising in Judea and Samaria and Jerusalem.

“We are closely tracking every reported incident every day and we are deeply aware of the tragic loss of life that we’re seeing in the territories,” said Amr. “We are going to stay focused on our goal of working towards and advancing towards equal measures of security, freedom and justice for Israelis and Palestinians alike. And we’ll be engaging with the parties with that as our basis.”