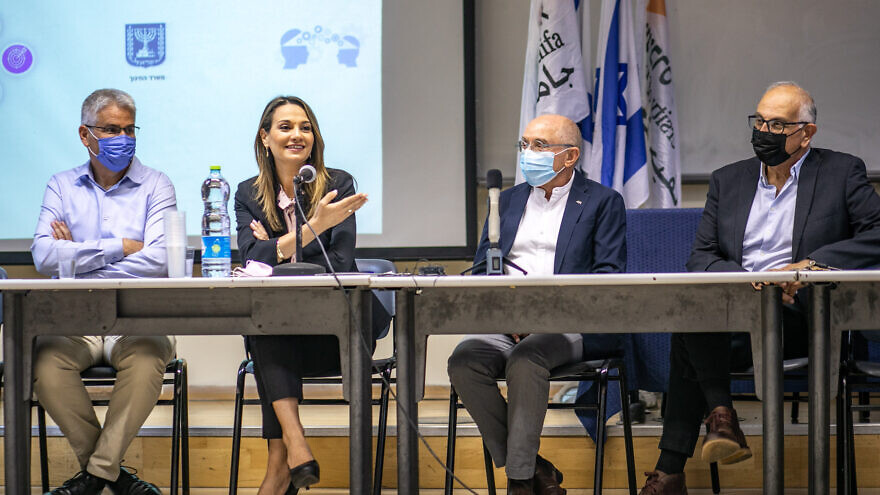 Israeli Education Minister Yifat Shasha-Biton announces plans to turn WIZO into the University of Haifa’s Faculty of Design and Architecture during a visit to the university
Spread the word.
Help JNS grow!
Share now:

(October 14, 2021, JNS Wire) Israeli Education Minister Yifat Shasha-Biton on Monday expressed the government’s commitment to turning the vision for the future Industrial Design Portal — a merger that will transform the NB Haifa School of Design (WIZO) in downtown Haifa into the University of Haifa’s Faculty of Design and Architecture — into a reality.

The government will facilitate the merger, in which WIZO’s expertise in diverse design disciplines will usher in a new era of education and innovation at University of Haifa’s well-respected School of the Arts, including a greater emphasis on interdisciplinary interaction. The forthcoming merged design program will aim to increase University of Haifa’s art school enrollment from approximately 600 to 1,000 students over a five-year transitional period, during which time the school will also add new program offerings.

“We at the Ministry of Education will do everything we can to make the merger of University of Haifa’s School of the Arts and WIZO occur as soon as possible. This is a crucial move that will benefit all institutions involved and Israel as a whole,” Shasha-Biton said during a visit to University of Haifa’s campus that marked the beginning of the academic year for higher education in Israel.

Known for its influential contributions to the aesthetics of Israel and named after the late Neri Bloomfield — former national president of Canadian Hadassah-WIZO and an ardent supporter of education and the arts in Israel — the merger with the NB Haifa School of Design (WIZO) will enable University of Haifa to offer a new Bachelor of Architecture (B.Arch.) degree, with the goal of producing alumni in applied arts who meet Israel’s growing need for town planning. In particular, as a densely populated country, Israel needs architects who will help communities nationwide find the balance between affordable, yet also aesthetic and livable housing options.

“In order to fulfill its mission as a full-fledged higher education institution, it is incumbent upon any university to not only educate its students in the basic sciences, but also to make an impact on culture, such as fashion, industrial design and architecture,” said University of Haifa President Ron Robin. “Accordingly, our new applied arts school will empower both the Israeli economy and Israeli society to flourish in new ways.”

Shasha-Biton, who completed all of her higher education degrees at University of Haifa, remarked that her visit to the campus felt like coming full circle.

“There are many people here in this very room who paved my way in academia. University of Haifa continues to create miracles in Israeli society, and I salute the staff and faculty for their important work,” she said.

Shasha-Biton praised the university’s contributions to Israeli society and its emphasis on expanding access to higher education not only in the city of Haifa, but throughout the region of northern Israel. As only 34 percent of high school students from Israel’s peripheral regions who pursue higher education ultimately obtain degrees, University of Haifa aims to increase the participation of young adults from the geographic periphery in higher education in order to generate social mobility. The university believes that for both Jews and Arabs from underserved communities, the opportunity to pursue higher education is an essential ladder for talented students who seek to rise above their current socioeconomic status.

On a global scale, University of Haifa has aligned its academic strategic plan with the United Nations’ 17 Sustainable Development Goals (SDGs) that are aimed at eliminating poverty, hunger, and discrimination. The university’s research agenda focuses on those goals and seeks to build a community of inclusion, equality, and justice through shared society. This is accomplished by investigating challenges locally in the university’s labs and community, then identifying and implementing solutions that will have a global impact.

“We are proud to open the academic year with a visit from Dr. Yifat Shasha-Biton, an esteemed graduate of our education program,” President Robin said. “The university is committed to elevating society and humanity and, as such, is committed to the UN’s Sustainable Development Goals. This is born out of the understanding that the university is not an ivory tower, but rather aims to make a prosocial impact on Israel and the world. We thank the minister for having confidence in our vision and, together, we’ll be able to provide a range of solutions to students in the North, enabling the accessibility of higher education to all.”

During the minister’s visit to the university, she met with Robin, University of Haifa Rector Prof. Gur Alroey, and Dean of the Faculty of Education Prof. Roza Leikin. Afterwards, she visited the university’s neurobiology labs headed by Prof. Mona Maron and Prof. Kobi Rosenblum, and spoke with students on campus as well as the leaders of the student union.

“I am a partner on your path to success,” Shasha-Biton said. “I will do everything I can to empower the University of Haifa and its presence in the city. It is important that people understand the significance of the university’s connection to its local community and to underscore that relationship for the benefit of all who live here.”

Republish this article
About The Publishers
American Society of the University of Haifa
Publish your organization's press release on JNS Wire
Releases published on the JNS Wire are communicated and paid for by third parties. Jewish News Syndicate, and any of its distribution partners, take zero responsibility for the accuracy of any content published in any press release. All the statements, opinions, figures in text or multimedia including photos or videos included in each release are presented solely by the sponsoring organization, and in no way reflect the views or recommendation of Jewish News Syndicate or any of its partners. If you believe any of the content in a release published on JNS Wire is offensive or abusive, please report a release.