International Israel education organization, StandWithUs – whose mission is to inspire and educate people of all ages and backgrounds about Israel, challenge misinformation and fight anti-Semitism – has announced it will be opening national operations in Australia.

StandWithUs is already well-known locally in Australia. The organization has been working with Australian audiences, running programs for Australian students and partnering in various ways with local organizations for over a decade, including with AUJS – Australasian Union of Jewish Students, Zionist Federation of Australia, Zionist Council of New South Wales, Israel by Choice (IBC), Bnei Akiva, Y2I – Youth2Israel, Beitar, Hineni and many others.

StandWithUs has run educational presentations for schools and school trips to Israel from both Melbourne and Sydney including Moriah, Masada, Emanuel and Mount Scopus schools including others. In addition, hundreds of Australians have visited the StandWithUs Israel Education Center in Jerusalem to participate in workshops on countering anti-Semitism, Israel activism and to learn more about the conflict and the region in general. Now, StandWithUs is set to hire local staff in order provide better on-the-ground support for youth and students, as well as the general community, who seek to push back against the misinformation that too often clouds debate and discussion on Israel and the Middle East.

Richard Balkin, who formerly served as President of the Zionist Council of NSW for 10 years, expressed excitement at this new development, commenting: “I have long admired the inspirational work of StandWithUs and I am sure that bringing all that the organization offers closer to the Australian community will be of great benefit.”

As part of a major campaign to counter the recent BDS-led boycott of the Sydney Festival, StandWithUs was able to lead efforts resulting in over 1,200 supportive letters being sent to the leadership of the festival encouraging them not to acquiesce to the aggressive boycott campaign.

CEO and co-founder of StandWithUs, Roz Rothstein said, “In the 20 years since its inception, StandWithUs has become a truly global movement and we understand the power in being a worldwide network, while at the same time, ensuring our output is nuanced for local audiences. We are excited to be investing in this new operation in Australia. Our work will involve both the Jewish and non-Jewish community as well as allies in the indigenous community who understand the importance of the indigeneity of Israel to the Jewish story – and this will also be a key focus for our educational efforts.”

British-born Executive Director of StandWithUs Israel, Michael Dickson commented, “We are making the full resources of our organization available to our partners, to young people and to the community at large in Australia, including educational curricula, research, factsheets and booklets, best practices, our vast social media presence, Holocaust Education department and Centre for Combatting Antisemitism. In addition to new local educational programming on the ground, we will continue to offer an array of initiatives to Australian youth spending time in Israel. We have had so many requests – especially from students – to grow our presence on the ground and I am thrilled we will be able to complement, not duplicate, existing work in order to collectively grow in effectiveness through partnerships.”

Liora Hayman, from Sydney, who was educated by StandWithUs while on an Israel By Choice (IBC) program, said, “Since training with StandWithUs on my gap year, I continuously rely on the skills and knowledge I acquired during the course. StandWithUs gave me the confidence to advocate for Israel when I was studying at university, particularly identifying and calling out often subtle but troubling remarks against Israel, anti-Zionism and anti-Semitism. The information gave me a powerful voice and skills to fight misinformation. Now, as a Jewish educator, I use the StandWithUs materials to inform my teaching, be up to date with current events and distribute as student resources in lessons. The information is always current, well informed and professionally produced. StandWithUs is an incredible and much needed asset to the diaspora.”

Former Australian Ambassador to Israel Dave Sharma MP said, “I came to know and meet with StandWithUs students in Israel as Ambassador and I hugely value their efforts to educate people about the facts, especially when there is so much misinformation out there. Their growth on the ground in Australia is an exciting opportunity to open the eyes of many about the history, diversity and culture of the wonderful country to which I was proud to represent Australia. I wish StandWithUs Australia every success.” 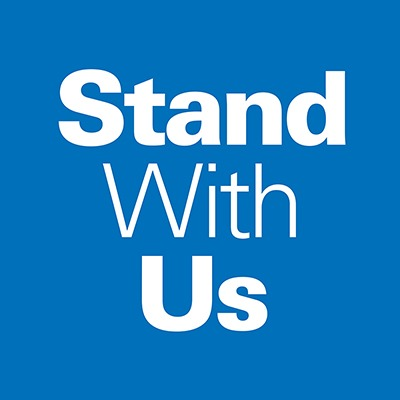 StandWithUs
StandWithUs is an Israel, non-partisan educational non-profit organisation that inspires and educates people of all ages and backgrounds, challenges misinformation and fights antisemitism with programs on five continents with offices throughout the U.S., in Israel, the UK, Canada and Brazil. We are inspired by our love of Israel, our belief that education is the road to peace, and our commitment to stand up for Israel and the Jewish people. StandWithUs empowers and energizes students and communities with leadership training and educational programs in primary schools, high school and on university campuses. StandWithUs informs through social media, print and digital materials, films, weekly newsletters and missions to Israel. StandWithUs has received the highest ratings from Charity Navigator (4 stars) and Guidestar (Platinum) and is a U.S. registered 501 (c) (3) non-profit and Section 46 charity (Israel), a UK registered charity and StandWithUs is not politically aligned in any country. It does not and has never advocated specific policies for Israel. Our work and our respect for Israel’s democratically elected government are not contingent on which parties are in power. Our goal is to counter antisemitism and to educate the public about Israel and empower others to educate their communities, and to make it possible to have reasonable, informed conversations about Israel’s policies on campuses and in communities. Web: https://www.standwithus.com and https://www.standwithus.com/australia For further information, employment positions, to get involved and for partnership opportunities with StandWithUs Australia, email: australia@standwithus.com
Publish your organization's press release on JNS Wire
Releases published on the JNS Wire are communicated and paid for by third parties. Jewish News Syndicate, and any of its distribution partners, take zero responsibility for the accuracy of any content published in any press release. All the statements, opinions, figures in text or multimedia including photos or videos included in each release are presented solely by the sponsoring organization, and in no way reflect the views or recommendation of Jewish News Syndicate or any of its partners. If you believe any of the content in a release published on JNS Wire is offensive or abusive, please report a release.