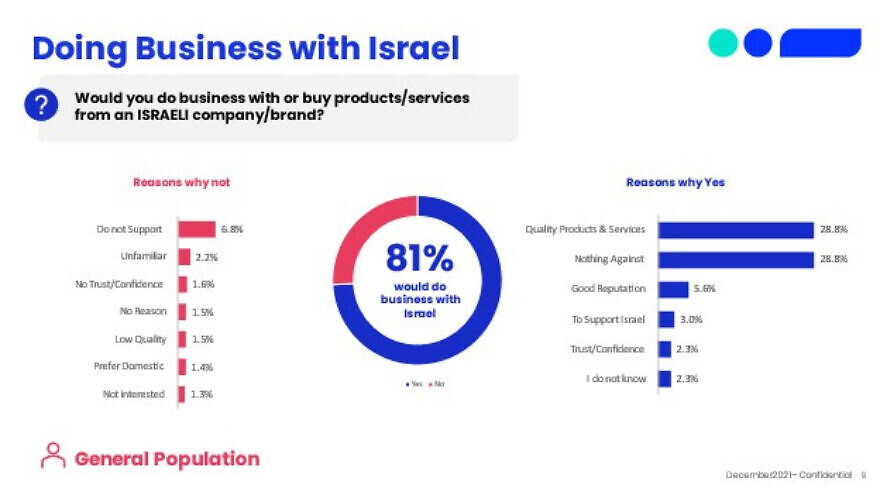 The survey focused on the potential change in perception of Israel by millennials, ages 25-44, following the three significant events of the past year – Operation “Guardian of the Walls,” Israel’s handling of the COVID pandemic and the record breaking year of Israel’s high-tech industry.

The survey was conducted between August and September 2021, around three months following Operation Guardian of the Walls and during the fourth wave of the COVID pandemic.

A total of 2,194 people in the U.S. participated, 1,112 businesspeople and 1,082 from the general public. All participants held college degrees or more and 28% of the general population and 51% of the businesspeople were business owners, C-Suite executives, or senior managers.  There was a separate questionnaire for each group. The margin of error was 3 percent.

The survey was conducted in collaboration with the international consulting firm Bloom Consulting, which specializes in place branding. The rating scale used was 1 to 5, one being extremely negative and 5 being extremely positive. A rating of 3.5 or better is considered very good.

“The findings of this survey proved us wrong in a most wonderful way and had several lessons.   Firstly, we, meaning those of us in Israel and the Jewish diaspora, thought that Operation Guardian of the Walls would have had a negative impact on the perceptions of millennials in the U.S. The survey showed that the events of May 2021 did not represent a watershed moment for Israel’s global image three to four months following. This tells us emphatically that we must operate according to hard data rather than personal opinion, especially after a major crisis,” said Joanna Landau, Founder and CEO of Vibe Israel.

Ms. Landau continued, “The data also supports the premise that efforts and resources should be split between diluting the negative arguments and doubling down on positive brand and perception building. Vibe Israel actively engages with organizations in Israel and the Jewish Diaspora that are next-Gen facing by offering them a narrative and story about Israel, that we know from our vast experience in the last decade, resonates with young people.   It is very important that our community, as a whole, define the conversation about Israel, in our own positive and authentic terms, rather than let anti-Israel voices take the lead. I invite you to join us in creating our own path to the future.”

“One of the major takeaways from this year’s annual perception survey is that in the U.S., the BDS campaign against Israel is not as effective as many people worry,” said Becca Hurowitz, President & Chief Executive Officer at Vibe Israel USA. “Israel has faced many challenges and obstacles throughout its history, including external efforts to inflame public opinion. Regardless of these efforts, the general public and business community in the US are more interested than ever in doing business with Israel and its companies and to buying Israeli products. Essentially, Israel’s innovation economy is serving as a perception Iron Dome, safeguarding Israel’s global reputation just as the Iron Dome protects its people.”

Following is a summary of the major findings of the survey and perspectives.

Operation “Guardian of the Walls” Impact

The data shows that Operation Guardian of the Walls had neither a major long-term impact on the opinion of the general population nor on that of the business community in the U.S.

These results run counter to the general consensus in Israel and amongst the Diaspora Jewish community, which thought that Operation Guardian of the Walls represented a dramatic public relations crisis for Israel. That assumption is now redefining how organizations are working towards improving Israel’s image.

When the businesspeople group was asked if their willingness to do business with Israel has changed in the past year, 34% of respondents stated that their opinion has changed for the better, and 5% stated that the reason for the positive change was the Israeli-Palestinian conflict.

The perception of the businesspeople group of Israel as a place to invest was rated 3.64.  This indicates the strength of Israel’s economic brand in this regard.  In addition, when comparing these responses, the economic offering could be seen as a “perception Iron Dome.”

When asked, When you hear the word “Israel,” what is the first image or idea that comes to mind?, the most popular answer among the general public group was Religion & Religious Sites (38.3%), followed by Trouble, Violence & Warfare (16.33%).

“In the past, the first image that came to mind when hearing the word Israel was Conflict. What we are seeing now is a continuation of a trend identified in Vibe Israel’s first annual report in 2018, where the first image that came to mind is Religion. As there is currently a mega-trend of millennials and Gen Z moving away from organized religion, the trend away from Conflict is good, but towards Religion is not necessarily a plus, as Religion alone doesn’t serve as a major attraction for the next generation,” added Ms. Landau.

When businesspeople were asked, from a business perspective, when you hear the name “Israel,” what image, word or concept first comes to your mind, 12.94% replied Innovation and R&D, 11.92% noted Trouble, Violence & Warfare and 10.33% responded Religion and Religious Sites. In previous years, the top response, like the general population, was Religion and Religious sites, and we believe this development is directly correlated to the success of Israel’s innovation-based economy and the promotion of this success by its ecosystem.

When asked, “Would you do business with or buy products/services from an ISRAELI company/brand?” 81% of the general population group answered yes.  Their main reason for doing business with Israeli companies (28.8%) is the perceived quality of Israeli services and products. Only 6.8% of the general population noted that their lack of support for Israel is the reason why they would refrain from doing business with Israeli companies – a staggeringly low number considering that the research was conducted only 3-4 months after Operation Guardian of the Walls.

When the general population group was asked, “Have you heard any positive or good things about Israel in the last two years?” 43% replied that they hadn’t heard anything positive, which is a loud message that Israel is not doing enough to promote itself to young people in the U.S. Of those that did mention positive news, 16.61% of this news related to Israel’s innovation and economy.

Ms. Hurowitz noted, “This shows, for the first time, that ‘Innovation and R&D’ have surpassed ‘Religion’ as a main association. This indicates, once again, that Innovation is serving as a perception Iron Dome. This is the net result of Israel’s business sector’s marketing initiatives and the Jewish community’s promotion of Israel’s innovation. Both are bearing fruit.”

Only 10% of the general public surveyed was able to name an Israeli brand or company, in spite of the fact that this past year was the most successful year on record for Israeli high-tech.

When the businesspeople surveyed were presented with the names of different companies in the world and were asked to name their country of origin, about half of the respondents incorrectly thought certain Israeli companies were founded in the U.S. or U.K.

Ms. Hurowitz concluded, “If Israeli companies only have name value among the Israelis themselves and the Jewish Diaspora, then Israel will continue not to enjoy the positive halo of the tremendous success of Israel’s tech community. The American mass market deserves to hear about what Israel has been doing during the global pandemic that has hit everyone very hard.”

Republish this article
About The Publishers
Vibe Israel
Vibe Israel's mission is to improve Israel’s image with the next generation by communicating its compelling and relevant attributes – in business, culture, lifestyle and much more – in a way that resonates with young adults worldwide. Israel is a next-generation country, and Vibe Israel’s job is to let the next generation know it. Vibe Israel uses a multi-pronged approach based on the principles of country branding, including influencer tours, online campaigns, digital projects, workshops, trainings and more. To put it simply: Vibe Israel serves as Israel’s branding and marketing agency, ensuring the world knows what Israel has to offer and actively chooses to engage with it. Vibe Israel is a non-governmental organization but has been endorsed by and worked in partnership with the President of Israel’s office and other government ministries.
Publish your organization's press release on JNS Wire
Releases published on the JNS Wire are communicated and paid for by third parties. Jewish News Syndicate, and any of its distribution partners, take zero responsibility for the accuracy of any content published in any press release. All the statements, opinions, figures in text or multimedia including photos or videos included in each release are presented solely by the sponsoring organization, and in no way reflect the views or recommendation of Jewish News Syndicate or any of its partners. If you believe any of the content in a release published on JNS Wire is offensive or abusive, please report a release.