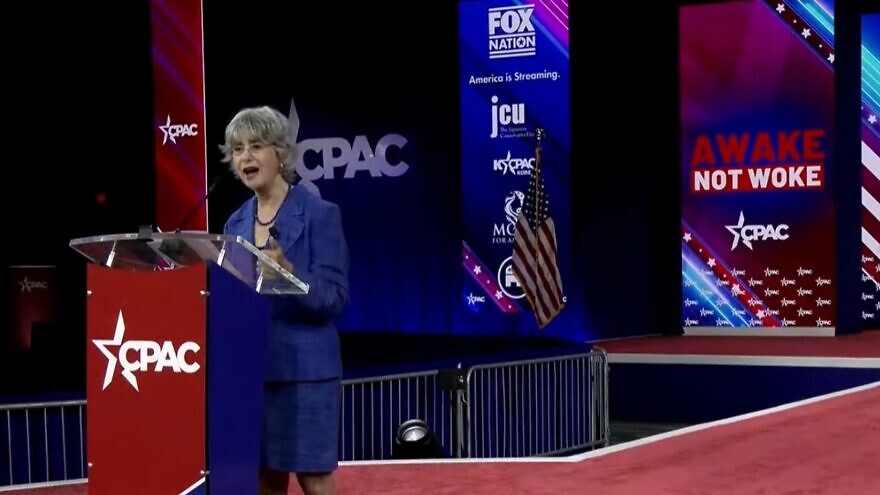 (March 3, 2022 / JNS) (March 3, 2022 / JNS) The chronic issue of United Nations bias against Israel took center stage at last week’s Conservative Political Action Conference (CPAC), in the only speech expressly focused on the Jewish state on the main stage of this year’s conference.

Speaking to a capacity audience in Orlando Fla., directly before the keynote address by former President Donald Trump on Saturday, Anne Bayefsky, director of the Touro Institute on Human Rights and the Holocaust and president of Human Rights Voices, told attendees that they need to act against the biased U.N. Human Rights Council (UNHRC) and its defamatory Commission of Inquiry (COI) into alleged war crimes by Israel.

Bayefsky gave the audience a crash course about Israel’s treatment in the United Nations and why conservatives should act to support the Jewish state.

Presidents George W. Bush and Donald Trump objected to the council, but Presidents Barack Obama and Joe Biden openly embraced it. President Biden’s delegate now serves alongside nations with dismal human rights records such as Russia, China, Cuba, Libya, Somalia and Venezuela. Conference attendees in the hall, who had been shut in by the U.S. Secret Service ahead of Trump’s speech, booed when Bayefsky read the names of those nations.

Bayefsky noted that the council has adopted nearly three times as many resolutions that condemned Israel than any other nation. By comparison the council failed to adopt a resolution naming Russia the last time Russia invaded Ukraine to annex Crimea in 2014.

Meanwhile, less than half of the 193 U.N. member nations are true democracies, according to Bayefsky, and on the Human Rights Council, Islamic states hold the balance of power.

“In short, the U.N. takes your money and democratic credentials and turns them against Israel,” Bayefsky said.

Bayefsky said that no Western democracy voted for the creation of the COI on Israel, but it was funded by the U.N. General Assembly in December. The inquiry has been designed to achieve four goals. First, to declare the Jewish state to be a racist state and guilty of apartheid; second, to prosecute Israelis for crimes against humanity and war crimes; third, to pressure businesses globally to divest from Israel’s economy; and finally, to launch an arms embargo against Israel.

The inquiry’s three appointed inquisitors, she said, have already called Israel and apartheid state, said it was guilty of ethnic cleansing, lobbied for the Boycott, Divestment and Sanctions (BDS) movement and demanded Israelis be prosecuted at the International Criminal Court. These biases, she said, violated U.N. rules requiring inquisitors to be impartial and objective. Israel, she explained, was being sentenced first and given the verdict afterward.

The investigation has been provided with a large permanent staff, a dedicated legal staff, and funded at $5 million a year.

“The game plan is to turn back the clock to before the founding of modern Israel,” Bayefsky said. “For Palestinians, this is project do-over.”

She continued, “Let’s remember, Israel is a country where Arabs and Muslims sit on the supreme court, serve as ambassadors, volunteer to serve in the defense forces. A Muslim political party is part of Israel’s governing coalition. And Arabs have more democratic rights in the Jewish state than in any Arab state. Now let’s talk about actual apartheid. In the U.N. ‘State of Palestine,’ selling land to Jews is a crime punishable by life imprisonment with hard labor. In what’s really ‘Apartheid Palestine,’ the Palestinian Authority has said Jews will be forbidden from living there or defiling it with their ‘filthy feet,’ in Palestinian leader Mahmoud Abbas’ words. But real life doesn’t intrude on U.N. life.”

Bayefsky asked the audience if they’d ever prayed for the wellbeing of the Jewish state, or visited the old city of Jerusalem, to which the mostly Christian audience cheered and applauded. Some shouted, “Yeah!”

“I’m sorry to tell you, according to the U.N., you are a ‘root cause,’ an ‘oppressor,’ and your name could find its way onto a U.N. list of individuals responsible,” she responded.

Bayefsky urged the audience not to be silent.

“Hell no!” yelled an attendee.

She then instructed the audience to photograph a QR code displayed on the large monitors on both sides of the convention hall or go to www.submit.global. These codes led to either a prefilled statement attendees could sign, or a form where they could write their own statement. Statements would be sent to the COI, which has issued a call for submissions.

Bayefsky said the COI is expecting submissions to “pour in from Israel bashers.”

“Let us prove them wrong by making our own submissions, not because we are going to change the outcome of this kangaroo court, but because we can affect the court of public opinion,” she said. “We can identify the real root cause of this conflict — anti-Semitism! We can testify to the indigenous connection between the Jewish people and the land of Israel.”

Bayefsky concluded by telling the audience to also watch the appropriations process on Capitol Hill where there are ongoing negotiations to fund the government for 2022 through an omnibus spending package which could shortly be finalized.

“Unless the funds that pay for the U.N.’s inquiry are expressly withheld, you are going to pay for this U.N. war on Israel,” she said.