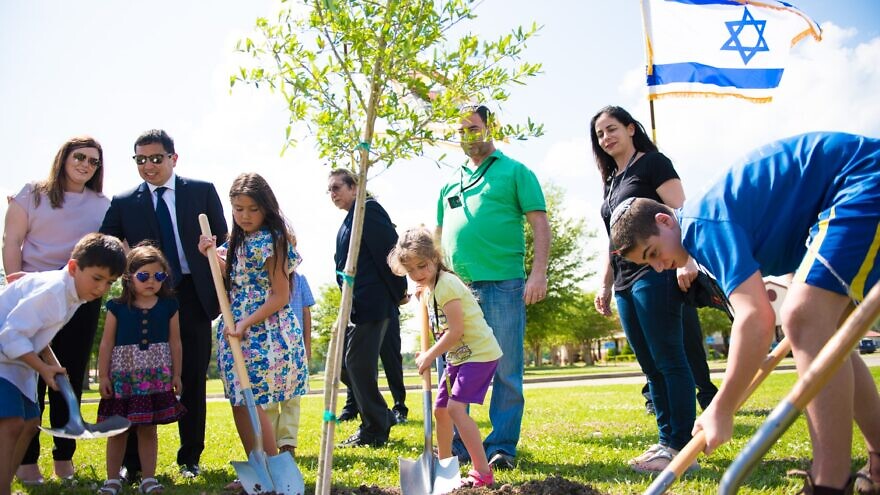 (October 24, 2022 / JNS) In 2008, when Israel celebrated the 60th anniversary of its birth as a modern nation-state, David Sickey took note, moved by the young nation’s story of struggle and hard-won independence.

Then vice chairman of the Sovereign Nation of Coushatta of Louisiana, one of four federally recognized Native American tribes in Louisiana, Sickey extended a hand to Israel.

“The idea came to me how can we come together and celebrate independence, sovereignty, self-determination and a shared spirit of endurance,” said Sickey, who later rose to the chairmanship of the Coushatta, an office he held until last year. Today he is CEO of Sickey Global Strategies, providing consulting to companies and organizations on issues affecting Native Americans.

Later that year, in an affirmation ceremony on tribal grounds in Elton, La., he pledged friendship to Israel on behalf of the Coushattas, the first Native American tribe to so honor the young nation. Sickey saw the parallels, he said, in the experiences of Native Americans and those of the Jews who found refuge in Israel under British rule and who later fought for statehood, turning the ancient home of their people into an independent and thriving nation.

Like the Jewish people, “we have managed to preserve our identity and the language of our ancestors despite challenges and external influences,” he said. “Even though we might not be Jewish or Israeli, we understand what they’ve been through and we wanted to send a message that we are here to support them.”

More interaction has followed that initial ceremony, including participation in a trade mission to Israel and an agreement that made the Coushatta the exclusive distributor of products in the United States for Israeli skincare company Aya Natural, a partnership that has helped extend the tribe’s economic activities beyond casino gambling. 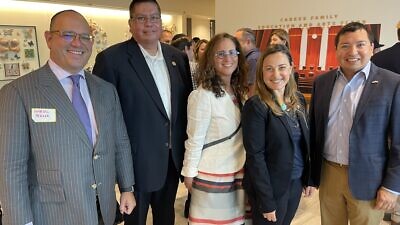 And soon, on Nov. 1, another outgrowth of the Coushatta-Israel friendship will take place at the Paragon Casino of the Tunica-Biloxi Tribe of Louisiana in Marksville. Organized by Sickey and sponsored by Red River Bank and the Tunica-Biloxi Tribe, the casino will screen Upheaval, an English language documentary about the life of the late Israeli Prime Minister Menachem Begin, who not only led Israel through tumultuous times but opened its doors to many others seeking refuge.

R. Blake Chatelain, president and CEO of Red River Bank, who has worked with Sickey on various community development events and projects, said that sponsoring the film fits a number of targets for the bank.

“We like to be part of a conversation in the community, trying to keep our communities growing not only economically but also in diversity of thought,” said Chatelain. “More than that, he said, as a reader of biographies of historical figures, the film has personal resonance for him. I tend to be drawn to these kinds of stories, of someone facing challenges, fighting for what they believe in and making a major difference in the course of their life.”

Indeed, the life of Menachem Begin is one for the history books. As a young man, in Nazi occupied Poland during World War II, he was a leader of the Zionist Betar youth movement, which aimed to establish a Jewish state in what was then Palestine. He managed to evade the extermination camps but suffered torture and imprisonment in a Russian gulag. In the end, he survived—although he lost his entire family to the Nazis—and in 1942, made his way to Palestine where he became a leader of the Irgun, the paramilitary force that fought the British and later, the Arabs, for control.

After Israel achieved statehood, Begin was elected to the Knesset, Israel’s parliament, and in 1977 became prime minister of the young nation-state. He was the first prime minister to welcome Ethiopian Jews and Russian refuseniks to the fledgling nation. His welcome even extended to Vietnamese refugees, affirming his belief in the dignity of all human beings.

As prime minister, his actions and decisions were guided by his belief that Jews should be the authors of their own destiny. That included meeting in Jerusalem in 1977 with Egyptian President Anwar Sadat and, later, signing a peace treaty with Egypt. A turning point for the Jewish state, the treaty was an act of unprecedented courage at a time when Israel was surrounded by countries that wished only for its demise. 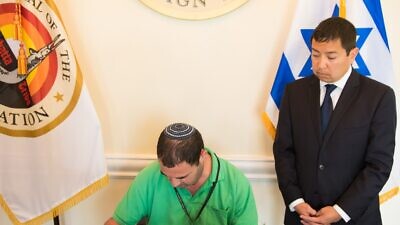 As David Sickey looks on, Consul General of Israel to the Southwest U.S. Gilad Katz signs a guest book during a visit to the Coushatta Tribe of Louisiana in May 2018. Credit: Courtesy David Sickey.

It was in these kinds of acts, Sickey said, that he found inspiration, calling Begin’s courage and determination a role model for humanity.

“What really stood out to me was the courageous leadership to do what is right—even if in the end the result is not in sight—that Menachem Begin demonstrated in the early days of nation building,” said Sickey, who first saw the film at the Holocaust Museum in Houston in May. “He helped create a nation out of wilderness and paved the way for Israel’s founding.”

Importantly, the movie doesn’t ignore the controversies that bedeviled Begin’s leadership, such as Deir Yassin and the bombing of the King David Hotel, actions that resulted in deaths and got Begin branded a terrorist by the British. His tenure as prime minister also had its controversies, as he made decisions and took actions to protect Israel, including the tragic and ultimately doomed war in Lebanon. Nevertheless, the fundamental message of the film is on Begin’s courage, his leadership, and his lasting impact on Israel and the Jewish people.

More than a retelling of the life of an individual, Upheaval is the centerpiece of an effort by the Denver-based Hidden Light Institute to share lessons for leaders today and tell the story of modern-day Israel. The organization aims to educate about Begin’s values and beliefs and inspire action in a world where anti-Semitism and violence against Jews are on the rise and where many people know little about Israel or the struggles that led to its founding.

This screening of Upheaval is being held on Nov. 1 at 7 p.m. at Paragon Cinema in Marksville, Louisiana. Admission is free of charge to the community. To register, visit: https://bit.ly/3yt7tyK