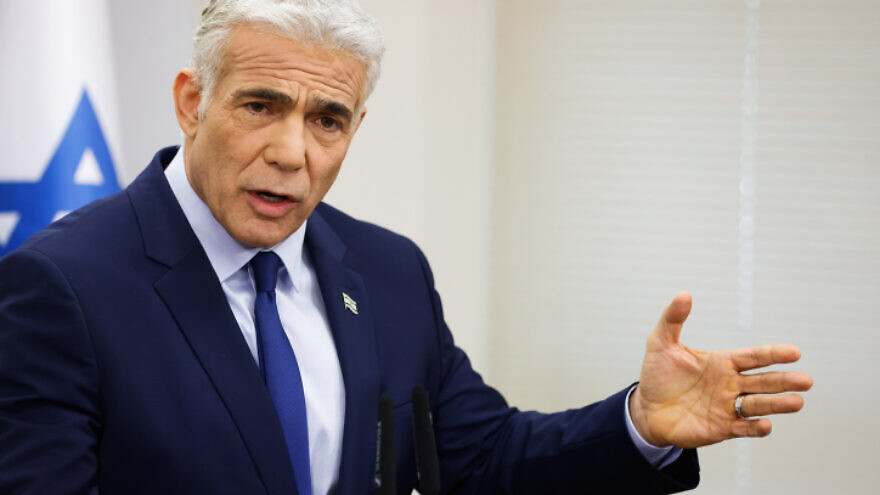 (June 15, 2022 / JNS) The following is an abridged translation of Israeli Foreign Minister Yair Lapid’s opening remarks at a press briefing on June 15, 2022.

A year and a day ago, I arrived at the Ministry of Foreign Affairs for the first time, and I gave a speech before its employees in which I laid out three top goals and two primary challenges.

The first goal was to change our relations with the United States and Europe, and how we work together. To reestablish our dialogue with them on the basis of democratic and liberal values, without giving up on any Israeli national or security interest.

I’m not sure even you remember how bad our situation was. With the Democratic Party, with American Jewry, with the European Union… there wasn’t anyone who would listen to our position on the Iranian nuclear issue, or fight on our behalf in international institutions.

This year, all that changed. The American decision to not remove the Revolutionary Guard’s designation as a terrorist organization is a victory of Israeli policy. Like the overwhelming 420-9 result in Congress on funding for assistance for the Iron Dome missile defense system.

The second goal was to transform the Abraham Accords from statements into a political reality. To open embassies, to sign economic agreements and to create momentum of diplomatic action throughout the Middle East.

After the Abraham Accords, a professional process of work to imbue them with content had not begun. We have created a world of content, from signing 70 economic and civilian agreements across the Middle East, to arranging the entry of Israelis to the World Cup in Qatar.

The third goal was to fundamentally alter the standing of the Ministry of Foreign Affairs, which was trampled upon and crushed for years. Budgets were cut, missions were closed, and there was a long and shameful period in which Israel didn’t even have a foreign minister.

In the same opening speech, I also defined two dangers, or challenges that we must handle. The first challenge obviously is dealing with Iran, not just with the nuclear agreement but also with its spreading terrorism and its presence on our northern border.

Today, Israel is in a much better situation than it was a year ago. The world is listening to our case, as demonstrated by the recent vote at the IAEA, and without our losing our operational freedom of action against Iran’s nuclear program.

The second challenge is the evil and false campaign that libels Israel as an apartheid state. Which is a step above BDS, because it seeks to erode the very legitimacy of the State of Israel.

There as well, we have had successes, like the mass boycott of the Durban IV Conference, which came after a very successful campaign by the Ministry of Foreign Affairs. Like the American–led statement opposing the Commission of Inquiry regarding “Operation Guardian of the Walls,” which a significant number of our friends around the world joined.

It goes without saying that these are processes. Kissinger wrote in “World Order” that in foreign policy there’s no such thing as an end point. That said, at least in this first year’s test, we have met all the goals we laid out for ourselves, and in some cases, even more than we had hoped: flagship events like the “Negev Summit,” or our overwhelming victory over the Durban IV Conference.

This morning, I’ll present you with the totality of this activity, but instead, you can simply look at the past two days:

Yesterday, President Biden announced that he will come here for a state visit on July 13. Part of the objective of this visit is advancing peace and normalization in the region to a new level. From Israel, the president will fly to Saudi Arabia.

Allow me to say a few words in English for the benefit of our friends in the foreign media regarding this visit:

We look forward to welcoming President Biden to Israel next month. The president is a true friend of Israel and has been his whole life. This visit will be an opportunity to showcase the unbreakable ties between our two countries, the strength and depth of our bilateral relationship. But it will also have an impact on regional security and economic ties in the Middle East. I am sure that the president’s visit to Israel and Saudi Arabia will have a lasting, positive impact.

On Monday, within an hour of each other, I welcomed Italian Prime Minister Mario Draghi and European Commission President Ursula von der Leyen to the Knesset. She committed to me for the first time that she will push for the renewal of our Association Agreement with the European Union.

The Association Agreement is the economic umbrella agreement between Israel and Europe. After we sign it, we will be able to, for example, create an arrangement that will make Israelis who travel to Europe pay less on their cell phone bills. On calls from abroad.

In the span of these two days, the ministry also led—alongside the National Security Council and the Prime Minister’s Office—decision-making regarding warnings about Iranian terrorism in Istanbul.

Today, there is no diplomatic-security forum in the government of Israel in which the Ministry of Foreign Affairs is not a central force.