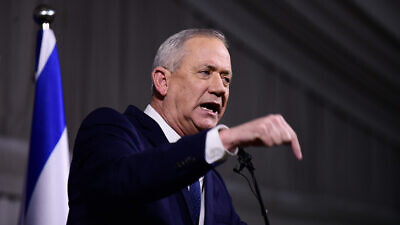 brief
Gantz accuses Netanyahu of ‘poisoning’ Israel, fostering ‘culture of crime’
JNS
As election looms, Blue and White leader Benny Gantz slams the door on a future unity deal, charging Israeli Prime Minister Benjamin Netanyahu of committing a “hate crime against democracy.”
briefLieberman: ‘No more unity, we will form a government without Netanyahu’
“We will have 61 seats without Netanyahu” and the ultra-Orthodox parties, says Yisrael Beiteinu head Avigdor Lieberman.

brief
US sanctions Lebanese individuals, companies with alleged ties to Hezbollah
JNS
“Hezbollah profits from the sale of goods vital to the Lebanese peoples’ health and economy, such as pharmaceuticals and gasoline,” said U.S. Treasury Secretary Steven Mnuchin. 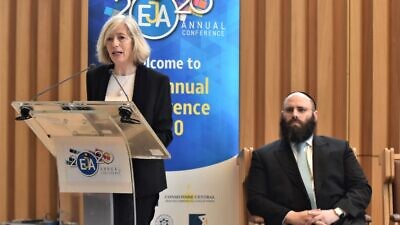 news
In Paris, 250 European leaders and conference attendees aim to confront anti-Semitism in full force
Eliana RudeeJNS
“We cannot be disconnected from the history of anti-Semitism, and we should be very careful of hate speech,” said Mayor of Paris Anne Hidalgo, who recognized that “there is a new form of anti-Semitism, which is anti-Zionism.”
briefStudy reveals widespread European anti-Semitic and anti-Israel prejudices
Eliana Rudee
A quarter of Europeans equate Israelis to Nazis, while one in five believe a “secret Jewish network” controls the world, according to a new survey of 16 European countries. 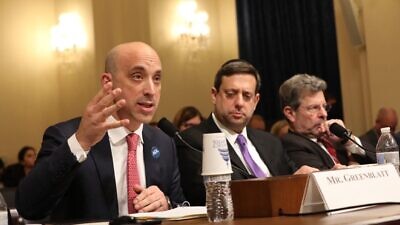 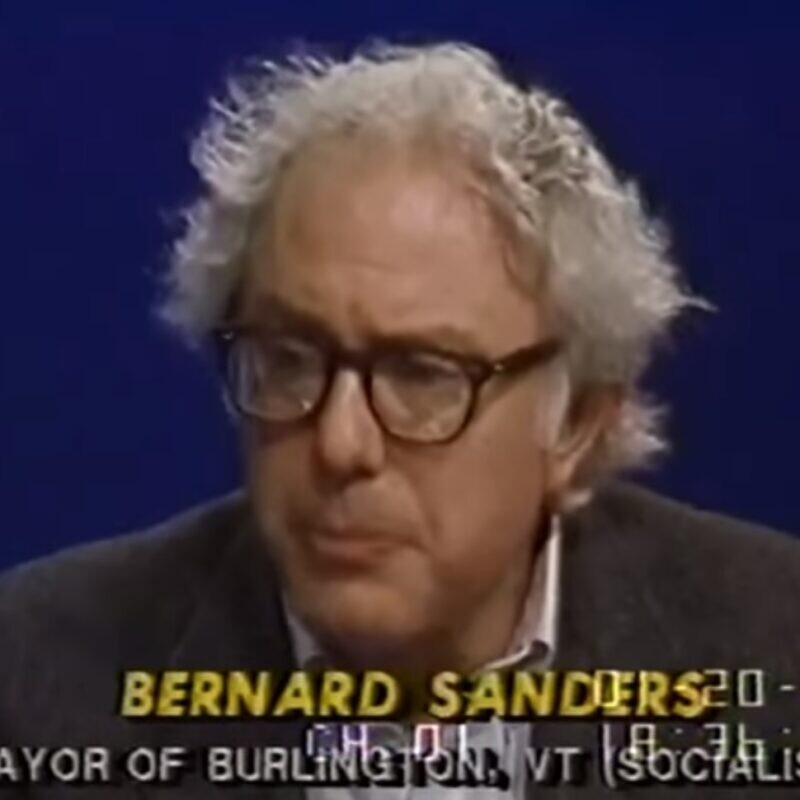 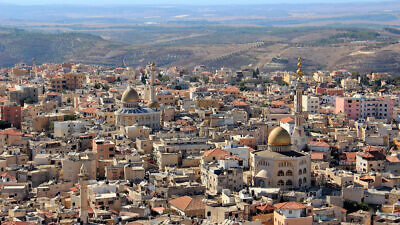 news
Israeli Arabs reject becoming citizens of Palestinian state, as suggested in Mideast peace plan
Ariel Ben SolomonJNS
Over the years, public-opinion polls demonstrate that Israeli-Arabs reject trading in their current passports for Palestinian ones.
briefPoll: Israeli Arabs see Ahmad Tibi as top candidate for prime minister
As much as 60 percent of Israeli Arabs believe that the Joint List represents its interests, according to a recent study, while nearly a quarter are not familiar with the Trump Mideast peace plan. 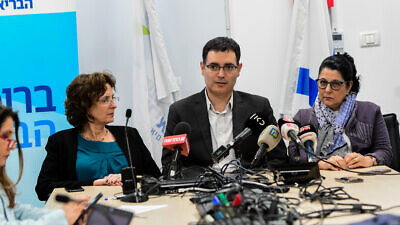 brief
Israel becomes first country to advise against travel abroad over coronavirus
JNS
“If you don’t genuinely have to fly—don’t do so,” the ministry said in a travel warning that also advised canceling or delaying all upcoming international conferences and gatherings in Israel itself.
briefHealth Ministry: Israelis returning from Asia to remain isolated for 14 days
Some 1,600 Israelis have already been quarantined for possible exposure to coronavirus, including 102 in Tel Aviv, 97 in Haifa and 77 in Jerusalem.
briefIran coronavirus death toll hits 19, with 139 more confirmed cases
Death toll in Iran is reportedly the highest after China • Coronavirus reported in Kuwait, UAE and Bahrain. 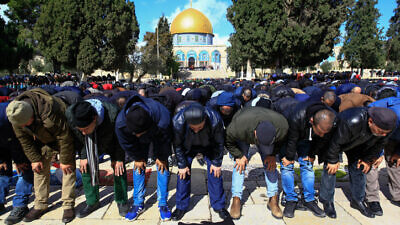 brief
Al-Aqsa preacher calls for retaliation against ‘evil peddlers who make deals’
MEMRI
Sheikh Muhammad Ayed: “It is time to announce the Caliphate, liberate Jerusalem, set out for Rome and the White House and conquer the world!” 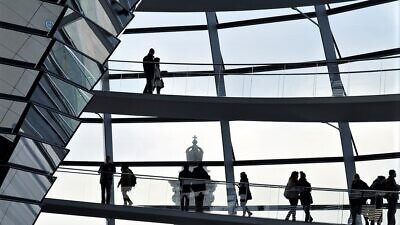 brief
Berlin film fest screens premieres of new Holocaust movies, along with newly restored old ones
JNS
The Berlinale features other movies with Jewish themes, including “Minyan,” “Speer Goes to Hollywood” and “Listening In.” 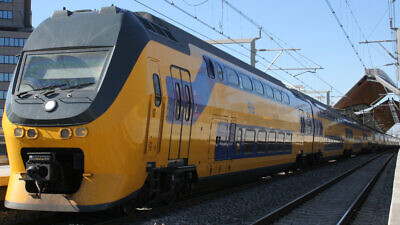 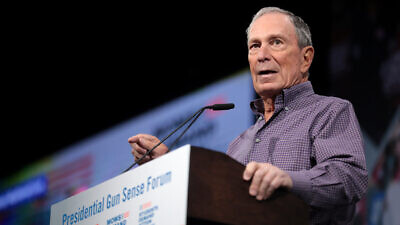 brief
Bloomberg first Democratic candidate confirmed to address AIPAC
JNS
Michael Bloomberg will speak at the annual conference, to be held March 1-3 in Washington with the final day falling on Super Tuesday, when 14 states will hold presidential primaries.
briefDemocratic presidential candidate Klobuchar to skip AIPAC annual conference
Jackson Richman
Following the Democratic debate at the Charleston Gaillard Center, in response to whether or not she would attend, Klobuchar replied “No” to JNS, citing that the conference coincides with Super Tuesday on March 3, when 14 states will hold their primaries.
briefPence to address audience at annual AIPAC conference
U.S. Secretary of State Mike Pompeo, Senate Majority Leader Mitch McConnell (R-Ky.), Senate Minority Leader Chuck Schumer (D-N.Y.) and other members of Congress are scheduled to speak. 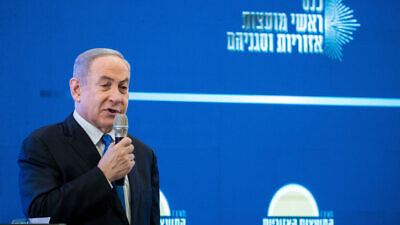 brief
Netanyahu: ‘We’re only two seats away from a strong right-wing government’
Ariel KahanaIsrael Hayom
Days before the election, Israeli Prime Minister Benjamin Netanyahu warns regional council heads that a government under Benny Gantz would depend on the Joint List and “endanger Israel’s security.”
briefBennett: ‘I’d rather sit in the opposition than join a government led by Benny Gantz’
Ariel Kahana Israel Hayom
Wide-scale military campaign in Gaza is “inevitable” • Yamina Party will only join a Netanyahu government, says Israeli Defense Minister and Yamina leader Naftali Bennett.
briefFor first time in round three of elections, Netanyahu pushes past Gantz in polls
Israel Hayom
With just a week to go until Israel’s elections, Israeli Prime Minister Benjamin Netanyahu’s Likud Party is projected to garner 33 Knesset seats, compared to 32 for challenger Blue and White.
newsFor third time in row, Netanyahu and Gantz race towards an inconclusive finish line
Dov Lipman
“We are working hard to make sure that these elections will be the last in this cycle,” Knesset member Boaz Toporovksy told JNS as the March 2 elections approach. 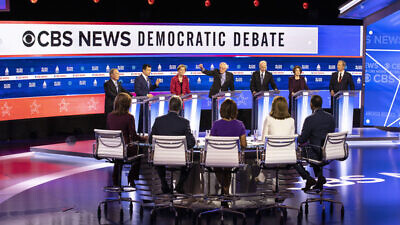 news
In South Carolina debate, Democratic candidates spar over US troops in Middle East, embassy in Israel
Jackson RichmanJNS
“I don’t think we need to have ground troops anywhere terrorists can gather because terrorists can gather anywhere. But we do need intelligence capabilities and specialists on the ground,” stressed former South Bend Mayor Pete Buttigieg, who served in Afghanistan. 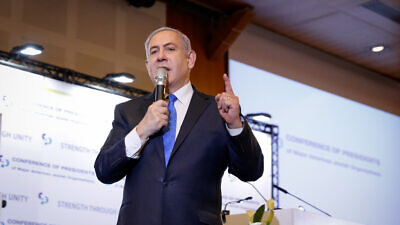 brief
Netanyahu: Plan to build 3,500 housing units in E-1 is moving forward
JNS
The construction plan, which will effectively connect Ma’ale Adumim to Jerusalem, was frozen for years after international criticism that it would harm a prospective Palestinian state.
briefJoint US-Israel sovereignty committee holds its first meeting
Ariel Kahana Israel Hayom
“The joint mapping process is a major mission, and it will be completed as rapidly as possible,” says Israeli Prime Minister Benjamin Netanyahu. 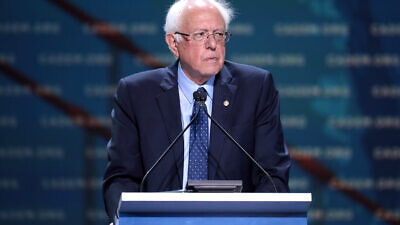 brief
More than 345 rabbis sign letter to frontrunner Sanders for harsh words on AIPAC
JNS
“As strong supporters of the U.S.-Israel relationship and AIPAC’s role in advancing it, we reject [his] outrageous comment accusing AIPAC of fostering bigotry,” begins the letter.
newsSanders says he will skip AIPAC conference, pro-Israel lobby group calls move ‘shameful’
Jackson Richman
AIPAC said “by engaging in such an odious attack on this mainstream, bipartisan American political event, Senator [Bernie] Sanders is insulting his very own colleagues and the millions of Americans who stand with Israel.”
ColumnSanders as a ‘Jewish’ president?
Jerold S. Auerbach
For assimilated Jews of a liberal persuasion who are as critical of Israel as Sanders, his election doubtlessly would be cause for celebration.
ColumnSanders, AIPAC and Israel
Alex Joffe
Unpacking Sen. Bernie Sanders’s refusal to attend the annual AIPAC Policy Conference reveals a gambit to split U.S. Jews not only from AIPAC, but from Israel. 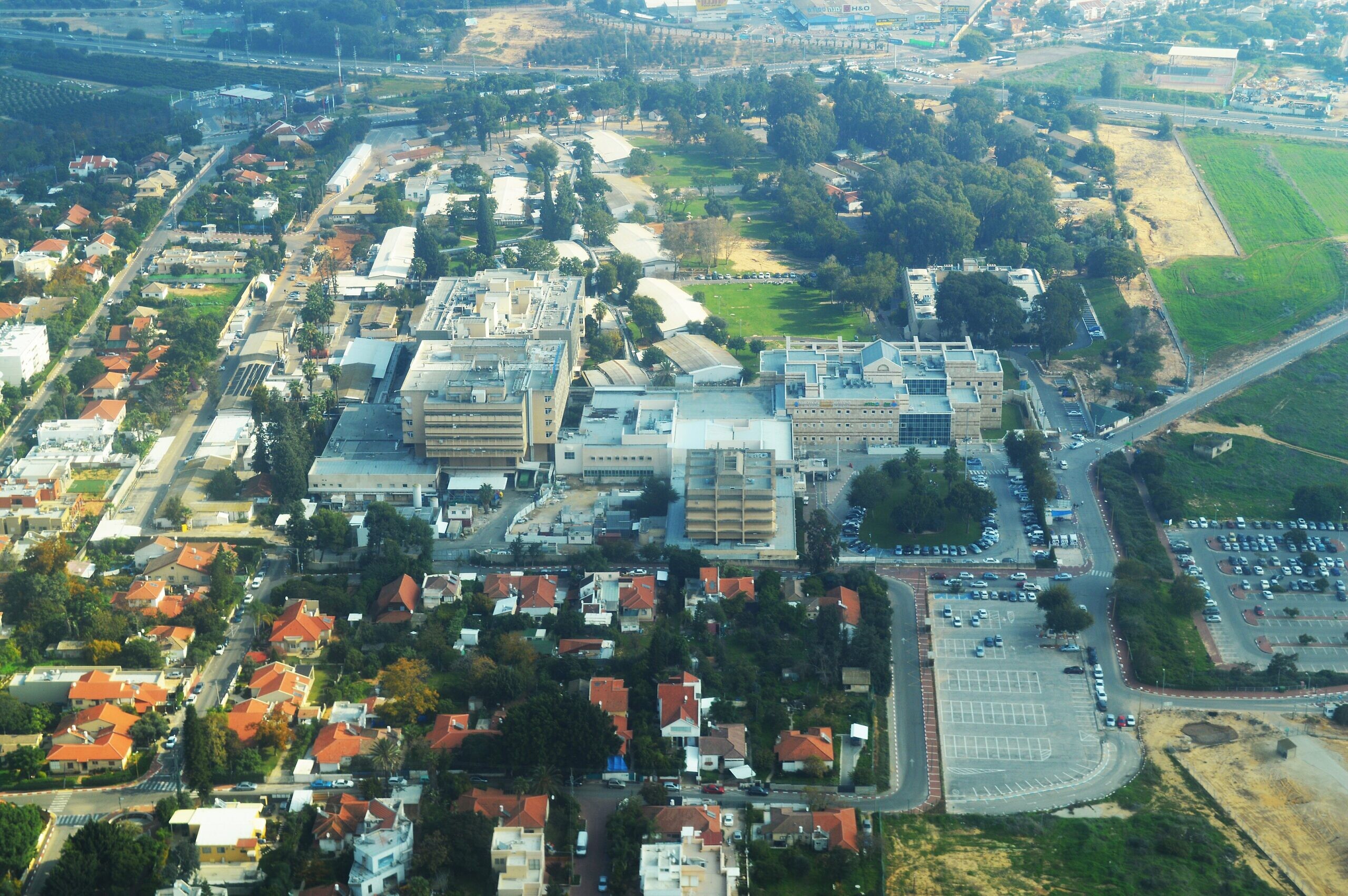 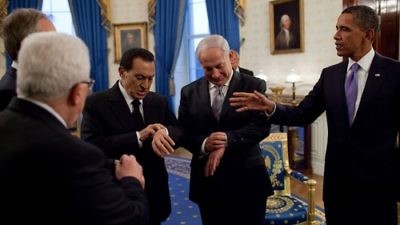 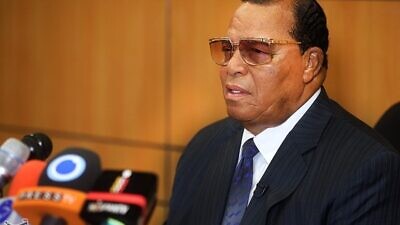 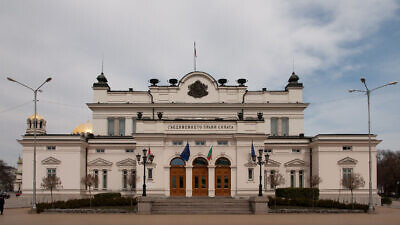 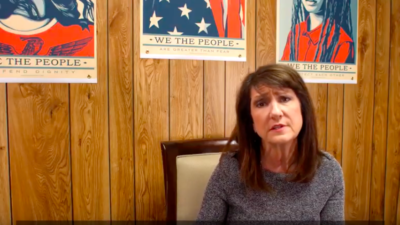 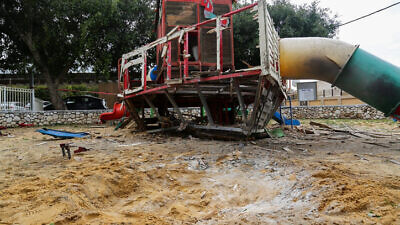 brief
Israel eases restrictions on southern residents as ceasefire appears to hold
JNS
Though schools remained closed, security officials authorized the return to roads, trains and offices following a ceasefire between Israel and Palestinian Islamic Jihad.
briefBennett: Israel needs to ‘fundamentally change the situation’ in Gaza
Israel is preparing a “meaningful move” with regard to the Gaza Strip that will only take place “on our terms and in our time,” according to Israeli Defense Minister Naftali Bennett.
feature
First Israeli nonprofit bank to provide life-changing loans as a ‘national mission’
Eliana RudeeJNS

brief
Israel may quarantine travelers from Italy, Australia over coronavirus fears
JNS
“We will not hesitate to enforce the quarantine,” says Israeli Health Minister Ya’akov Litzman.
news200 Israeli students quarantined after contact with coronavirus-infected South Koreans
Israel shuts borders to nationals of China, Hong Kong, Korea, Thailand, Singapore and Macau • 200 South Koreans quarantined in Gush Etzion • Flights to and from Seoul suspended indefinitely.
briefIsrael’s coronavirus plan includes commandeering hospitals, closing tourist sites
While no cases have been reported, a plan is in place to set up isolation units in established hospitals, staffed by disease-control experts.
briefWorried about coronavirus, Israel bars foreigners from high-risk countries
The new restriction will affect those who have traveled within the last two weeks to Thailand, Macau, Hong Kong and Singapore.
feature
For the 3,500 teens at the BBYO convention, the world needs help
James RussellJNS 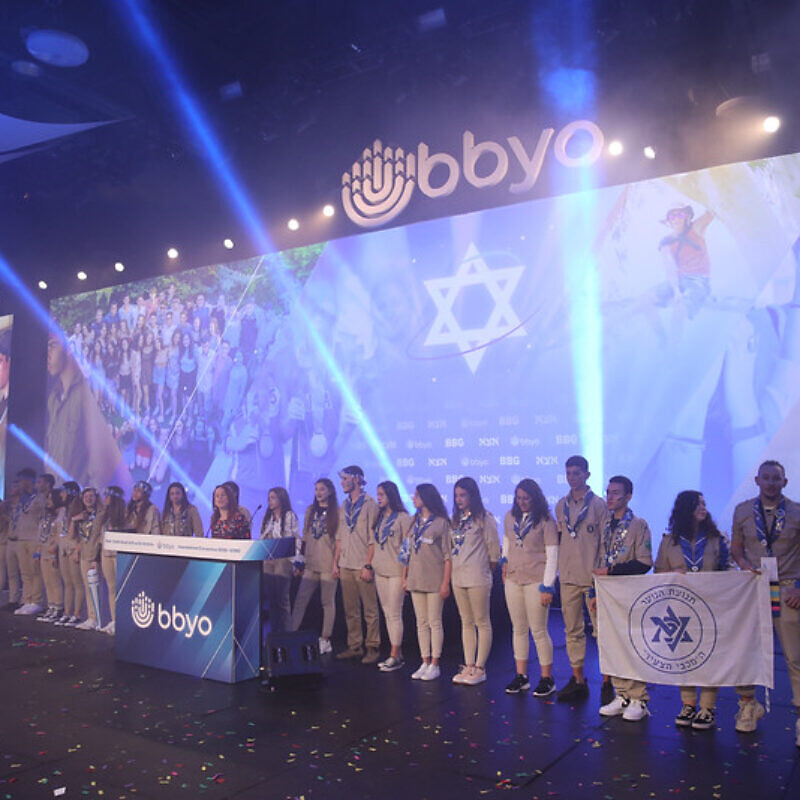 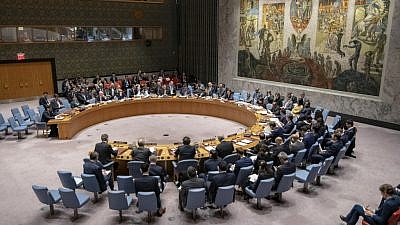 brief
UNSC issues unanimous statement of support for two-state solution
JNS
Approved by all 15 UNSC members, including the United States, it does not mention the Trump Mideast peace plan and calls for “all parties to refrain from undermining the viability of the two-state solution.”

news
Hamas fails to curb Palestinian Islamic Jihad, which has no interest in stabilizing Gaza
Yaakov LappinJNS
Following recent rocket fire, Israel cannot tolerate “the rules of the game” that PIJ is trying to impose on it, and the objective of reaching a long-term “understanding” with the main terrorist group, Hamas, is looking increasingly distant.
briefPalestinian Islamic Jihad announces Gaza ceasefire, IDF warns of escalation
More than 90 rockets have been fired on southern Israel in the past two days; most have been shot down by Iron Dome or landed in open fields.
brief55,000 students miss school as rockets rain down on southern Israel
Schools closed across south as heavy rocket fire from Gaza continues for second day • IDF strikes Palestinian Islamic Jihad targets in Gaza and Syria, killing six • Netanyahu: Israel may have to engage in “the mother of all operations.”
ColumnAs usual, Palestinian Islamic Jihad is trying to torpedo a ceasefire
Yoav Limor
Whether its efforts stem from its rivalry with Hamas, natural anarchist tendencies or directives from its Iranian master, the result is the same: PIJ is currently the primary source of Gaza’s ills.
feature
Israeli teens learn public diplomacy skills to serve as ambassadors abroad
Shiryn GhermezianJNS 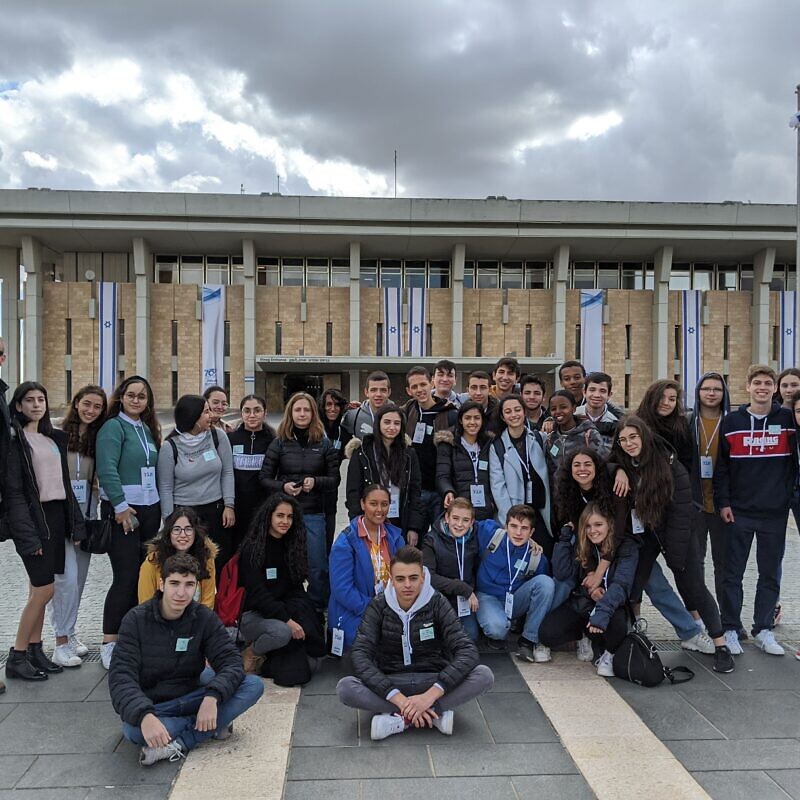 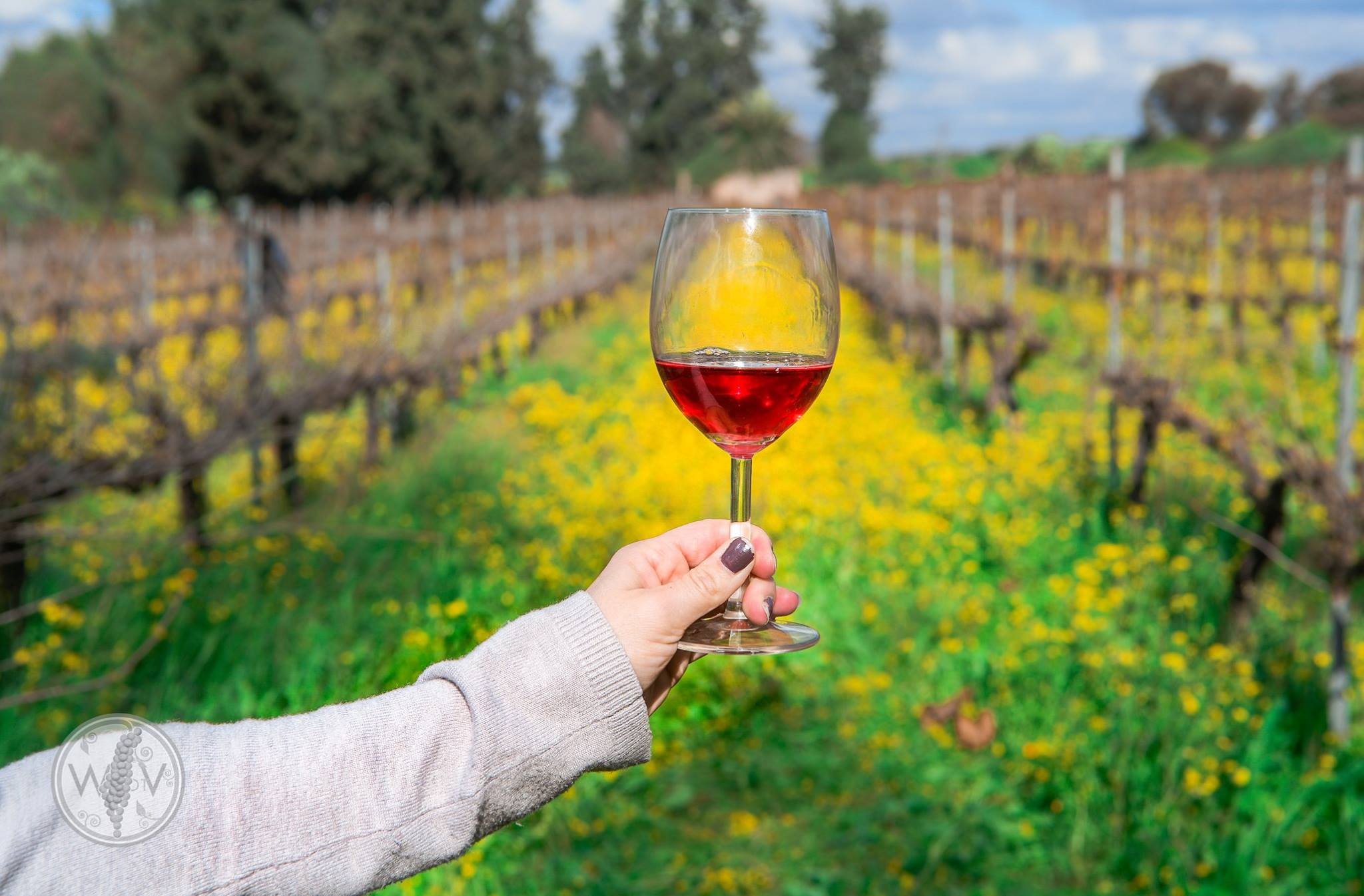 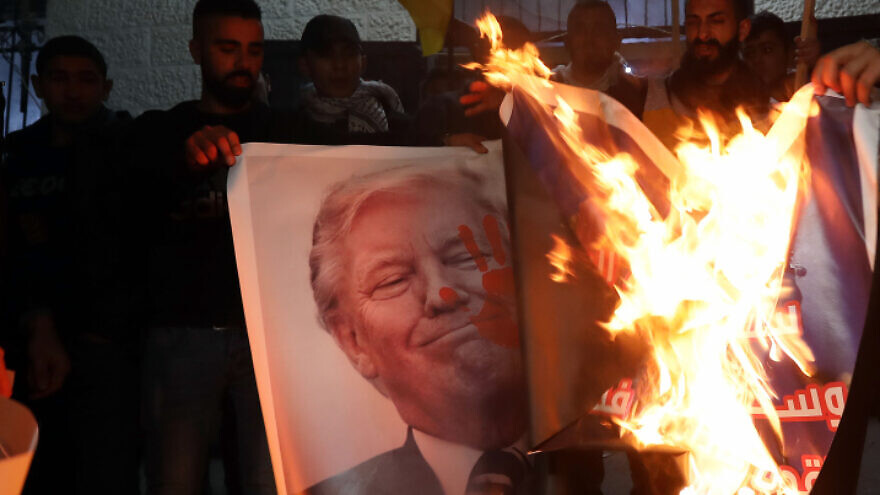 “Trump is a dog and a son of a bitch,” Palestinian sources quoted Abbas as saying.

The P.A. leader said he had refused to answer a phone call from Washington, and predicted that “difficult days” were ahead as a result.

“They called me from Washington and I did not pick up the phone. I said no and I will continue to say no,” said Abbas. “We are headed for difficult days, and we are beginning to bear the consequences of the objection. Resistance must be escalated at all points of friction. All young people must be encouraged,” he said.

Abbas said that while he had been advised not to refuse to take the call, he refused to “go down as a traitor.”

“I was told I’ll pay a heavy price for my foolish behavior,” said Abbas, but “I do not have much longer to live, and I will not go down as a traitor. It’s either dying like martyrs or flying the Palestinian flag on the walls of Jerusalem.”

The P.A. leader also said he would also turn to Hamas and Palestinian Islamic Jihad for help in defeating the U.S. plan, said the sources.

Fatah released a statement on Monday calling the United States the “main partner in the occupation” and Trump’s actions “repugnant.”

“We do not have to wait for any theatrical declaration of the U.S. government’s position—the main partner in the occupation,” said the statement. “Trump’s actions are repugnant and we will resist them with every legitimate measure.”

Also on Monday, Abbas instructed P.A. security forces not to prevent clashes between Arab rioters and Israeli troops in Judea, just two days before a “Day of Rage” that has been planned for Wednesday in response to the expected release on Tuesday of the U.S. plan.