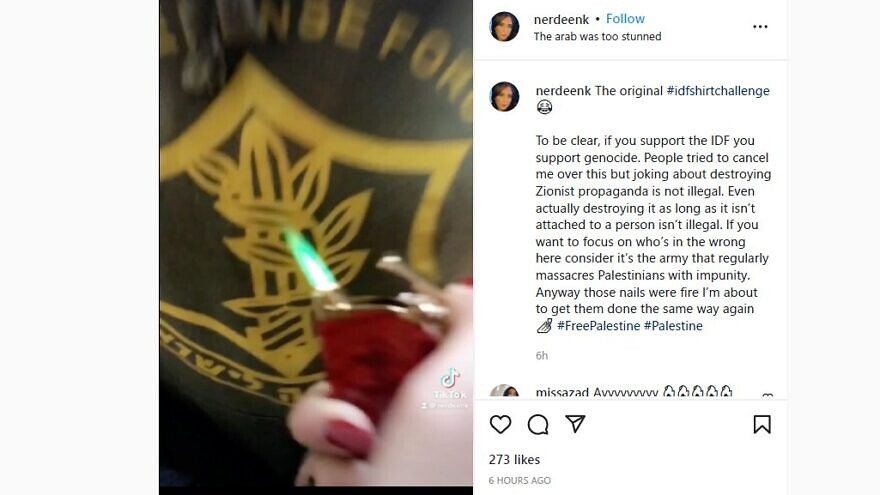 (December 31, 2021 / JNS) Following an assault earlier this week targeting a New York Jewish man due to his support for Israel, an anti-Israel activist took to social media to encourage further attacks.

“The original #IDFshirtchallenge,” Nerdeen Kiswani wrote on Instagram with an emoji that appeared to show a smiling face with tears. “People tried to cancel me over this but joking about destroying Zionist propaganda is not illegal. Even actually destroying it as long as it isn’t attached to a person isn’t illegal.”

The video, which was originally from 2020, was re-posted to Instagram earlier this week by Kiswani, who, according to the Canary Mission, is a virulent anti-Israel advocate, BDS supporter, and co-founder of the New York City Students for Justice in Palestine, which was renamed Within Our LifeTime.

The “IDFshirtchallenge” hashtag was started this week by pro-Israel advocates in response to the assault of a 21-year-old Blake Zavadsky on Sunday in Brooklyn, N.Y.

Zavadsky and Ilan Kaganovich, also 21, were outside a Foot Locker when two men called them “Dirty Jew.” Zavadsky, who was wearing an IDF sweatshirt, was punched in the face twice by one of the men. Police are still searching for the assailants. As part of the social media challenge, people were urged to post photos of themselves where IDF shirts in solidarity.

Liora Rez, executive director of StopAntisemitism.org, said “online hatred often leads to real-world physical violence and those that propagate it should be held equally liable under the law.”

However, this is not the first time Kiswani has shared the video, which shows her holding a lighter and standing next to a man with an IDF sweatshirt. “I hate your shirt. S**t, I’m gonna set it on fire,” a woman in the video is heard saying, adding, “I’m serious.”

The clip went viral last fall after it was posted to Twitter by Rez’s organization, which was among the groups calling for the City University of New York Law School, where Kiswani was a student, to respond. The school initially condemned Kiswani’s actions, however, the dean, Mary Lu Bilek, eventually rescinded the condemnation and said the anti-Israel advocate was simply exercising her First Amendment right to free speech.

She is not the only anti-Israel poster to hijack a hashtag intended to show support for a target of anti-Semitism. On Thursday, a person named “amoyal” posted: “I don’t know who needs to hear this, but the IDF perpetuates violence, murder and erasure on a daily if not hourly basis.” He also wrote, “anyone doing the #idfshirtchallenge is a white supremacist.”

Inna Vernikov, a New York City councilwoman from Brooklyn, has called for a march against anti-Semitic attacks to be held on Sunday afternoon in the Bay Ridge section of Brooklyn, N.Y., near where the incident took place. Several groups have already joined on as event co-sponsors including #endJewHatred, Russian American Jewish Experience, Brooklyn Mixed Martial Arts, Club Z, Legion Alpha, Americans Against Antisemitism, United Against Antisemitism and Fuel for Truth.

People attending the march are being asked to “bring your own IDF hoodie.”