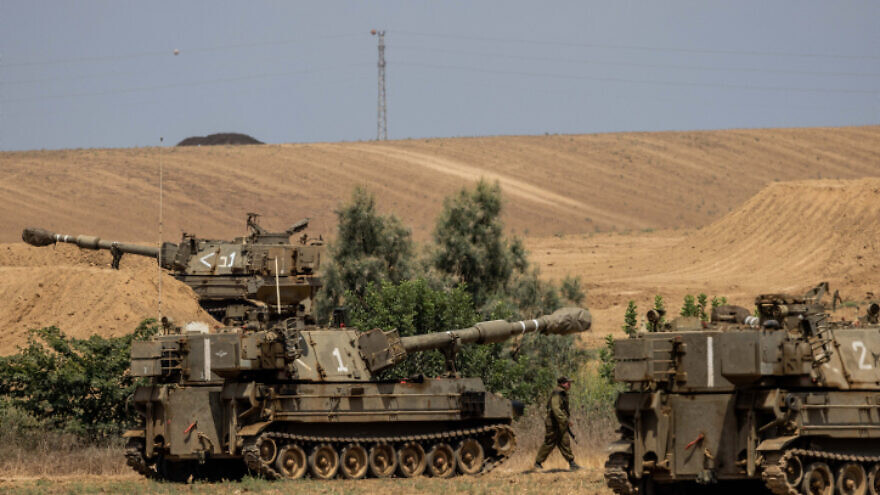 (August 9, 2022 / JNS) “Operation Breaking Dawn” is being described as one of Israel’s most successful Gaza operations in recent years. “All goals have been achieved, whoever tries to harm us will pay with his life,” Prime Minister Yair Lapid said on Monday evening, addressing the nation. Yet some have questioned Israel’s current Gaza policy, which leads it into successive rounds of fighting with no end in sight. They say it’s time to develop a new strategy.

“How do we see the next 20 to 50 years? Are we really going to live with the reality where every six months to a year, half of Israeli society is always under fire?” asked Amir Avivi, CEO and founder of the Israel Defense and Security Forum (IDSF), an Israeli NGO comprising thousands of former security officers.

“The idea is we will hit the terrorists hard and then gain a few years of quiet, but we see it’s not working,” he told JNS. “They build themselves back very, very fast. And with each operation they’re able to shoot more rockets with more explosives and more accuracy, while developing other capabilities. We need to ask ourselves: Is this the reality that the people of Israel deserve?”

While the current operation focused exclusively on the smaller Palestinian Islamic Jihad (PIJ) terrorist group, it’s to Hamas and its growing strength that Avivi points as proof that Israel’s current strategy is a failure. “Hamas is projecting its power and ideology all over Israel and all over the region. It’s becoming the leading organization in the fight for Jerusalem and the Temple Mount. They are the heroes of the Palestinians and also of Arab Israelis in the north and the south. This has become a huge threat. It’s not just about Gaza anymore,” he said.

Avivi praised the latest operation on the tactical level, but not the strategic one.

“This is the paradox. When the army fights, there’s nothing like the IDF. It’s amazing. But when you look at the overall picture, the strategic picture, it’s terrible,” he said.

It’s time for a new strategy, he said, arguing the answer can be found on Israel’s northern front. There, he noted, Israel employs constant pressure against Iranian encroachment in Syria. “Every day, every moment, every second that they try to build a [military] capability, immediately we attack them,” said Avivi.

Against terror groups in the Gaza Strip, however, Israel does the opposite. It halts operations and lets those groups rebuild.

“Each time we finish an operation, the IDF tells itself a story: ‘We hit them hard and now they’re deterred.’ It’s completely wrong. They are not deterred,” he said, noting the terror groups rebuild the second fighting stops. Once they feel strong enough, they attack again.

Just about every target hit in “Operation Breaking Dawn” the IDF knew about in advance, he said. “If the IDF knows there’s a warehouse of rockets, or anti-tank missiles, it should destroy it immediately and not wait until the enemy uses them,” he added.

“I don’t want to be dependent on whether or not they want to fight. I want them to be without capabilities,” he said.

Another downside to periodic, large-scale operations is the possibility that they might escalate into a larger war involving other fronts. “Every time we start a big operation because we’ve let them build their forces, it endangers Israel,” said Avivi.

Shedding light on how the current strategy came about, Avivi said it developed during the years of the Obama administration, which was pushing for the creation of a Palestinian state. Then-Prime Minister Benjamin Netanyahu, who opposed that plan, saw the only way of thwarting it was by leaving Hamas in charge of the Gaza Strip, so that the Palestinian leadership remained split.

“The strategy was ‘I want a weak Hamas, but I want Hamas,’ ” said Avivi, who noted that he supported the strategy at the time, but that the reality has since changed. He said a desire for a better approach is penetrating the IDF from the bottom up, noting that at the rank-and-file and battalion level there is “growing frustration.”

He suggested change will be an uphill battle.

“There are strong forces in Israel that don’t want to reverse the reality of Gaza, because reversing it would be admitting, finally, that everybody that pushed this Oslo process with the Palestinians was completely wrong. I think that the State of Israel has real difficulty in saying, ‘We were wrong,’ ” he said.

“I’ve been one of those arguing for many years already, ever since ‘Operation Protective Edge’ [in 2014] that Israel doesn’t have a strategy,” said Chorev.

“I would call it maintenance more than a strategy,” he said, agreeing that at one time it was part of Netanyahu’s strategy to keep the Palestinians divided during the Obama administration.

Chorev sees Israel’s options as limited. He isn’t sure that it can do much more than keep Hamas on the ropes at present, arguing that anything that rises in Hamas’ place will be worse. “Islamic Jihad is even more radical, getting their orders directly from Iran. Not to mention all kinds of quasi-Islamic State factions that hang around there,” he said.

“What Israel is trying to do is restrict Hamas. Hamas develops its capabilities, of course. It’s already spent over a billion dollars on military infrastructure in a place where people don’t have enough to eat. Israel in turn develops its own abilities against that growing military power. Now they’re talking about a very effective laser system,” he said.

However, Chorev agreed that Israel’s current policy isn’t one that can assure Israel’s long-term security, particularly for its southern residents, who bear the brunt of the missile attacks. “In the long run, Israel will have to face the music, and that might mean ground troops going into Gaza, even though the price could be horrible,” he said.

He has observed a growing impatience among Israelis, who are tired of the seemingly endless rounds of violence. There’s an increasing desire to “finish with this once and for all.”

Operations like the one that ended Sunday might serve as a “pressure valve” and for a time reduce the public’s growing anger.

“People now are saying maybe it’s better to do it this way—zero casualties on the Israeli side, many bad terrorists dead on the other side, but my prediction is this effect will be limited. In the case of a war with Hamas, or Hezbollah, the attitude would change swiftly,” he said.